Hot on the heels of iOS 6.1 public release, today Apple has made the iOS 6.1.1 beta IPSW available for download for registered developers. The changelog of iOS 6.1.1 beta does not provide any insight as to what changes have been made in this particular beta. However it is not unusual for Apple to seed a new beta firmware to developers after releasing a major update to the public. 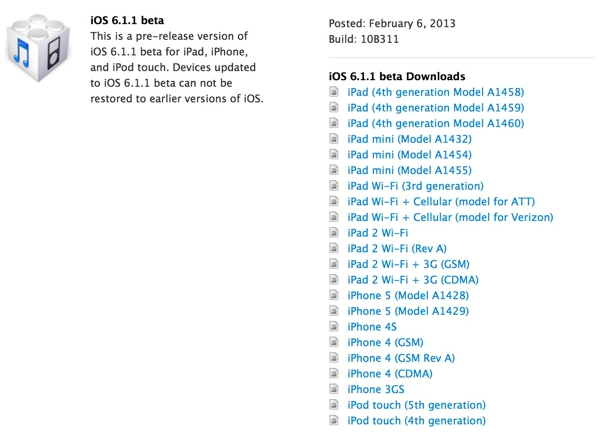 The availability of iOS 6.1.1 beta IPSW also comes hot on the heels of a recent hiring frenzy at Apple. Apparently the company is heavily recruiting for its iOS Maps team. Ever since iOS 6.0 came out late last year it drew widespread criticism over the lacklustre performance of Apple's own Maps application, which replaced the much appreciated native Google Maps app.

It goes without saying that iOS 6.1.1 beta IPSW is only available for registered Apple developers. The general public should not meddle with beta firmware even if it gets its hands on the IPSW from unofficial sources. Jailbreakers should be extra careful as there exists a major possibility that the exploits used in evasi0n iOS 6.x untethered jailbreak have been patched, though this remains to be confirmed.

According to a report, iOS 6.1.1 beta version comes with Maps update for Japan. These updates include improved voice turn by turn navigation, optimization to prefer highways over narrow roads, prompts about upcoming calls in turn by turn navigation, and updated freeway color which is now green. The improvements also include lables for junctions, intersections and interchanges. Indicators for transit station buildings, subway lines, and traffic lights have been added. Icons have also been updated for fire stations, hospitals, and post offices. 3D buildings have also been added which include Tokyo Station, Japan Imperial Palace, and Tokyo Tower.

On the other hand well known jailbreak developer iH8sn0w has revealed via Twitter that iOS 6.1.1 beta IPSW release does have Beta as its ReleaseType but it does not have an expiry date. Beta firmware almost always comes with an expiry date. Recently when iOS 6.1 beta 5 was seeded it was discovered that it too did not have an expiry date, so it turned out to be the iOS 6.1 GM build which was followed by public release of iOS 6.1. Could this iOS 6.1.1 beta be followed by an iOS 6.1.1 update? IT does makes sense, given how a new update will shut the door on the new untethered jailbreak. Lets see what happens.