It remains to be seen whether or not Apple is planning to release an iPad Mini. We have heard a lot about this elusive device, but nothing so far from Apple itself. There have been countless rumours as well as information, parts and panel leaks. They surely point towards the impending release of iPad Mini, the question is when that release is going to take place.

Just last week, rumour was that Apple will begin sending out invites for iPad Mini release event on October 10, whereas the actual event will take place on October 17. While we still have a day to see if Apple actually does send out the invites tomorrow, some more iPad Mini pictures have popped up online and they confirm whatever we have been hearing about this device up till now.

A number of iPad Mini mockups have surfaced in the past and today we have been treated to images of an iPad Mini mockup said to have originated from Taiwan. These iPad Mini pictures are in high resolution and are close up shots offering a very good look at the device. The mockup has been compared side by side with a full fledged iPad as well as an iPhone 5.

It is widely speculated that iPad Mini will have a 7.85 inch display churning out a resolution of 1024x768, exactly that of iPad 2. Processor is believed to be an A5 coupled with 512MB of RAM. Two cameras, one each in the front and back, have also been talked about with the back camera expected to be of 5 megapixels. If this device ever sees the light of day, it will definitely be touting the latest Lightening dock connector that made its debut on iPhone 5.

These iPad Mini pictures don't reveal anything new about the device, rather they only solidify the rumours we have been hearing up till now. This device is expected to come in both Wi-Fi only and 3G models. Some have even gone as far as to predict that this nifty little device could have LTE support. Previous part leaks have indicated at nano-SIM compatibility. 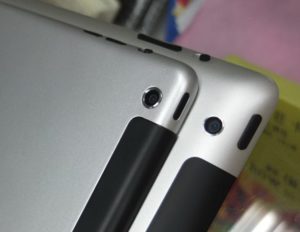 Do these close up, high resolution iPad Mini pictures make you wish Apple releases this device in the near future? It would be interesting to see how the global tablet market evolves once this device hits shelves around the world. Till then, we can only speculate and gawk at such pictures.