iPad Air Plus Looks Humongous in front of Other Apple Devices

We recently saw the size details of the alleged 12.2-inch iPad Air Plus aka iPad Pro. The leak received last week suggested that the upcoming larger tablet from Apple would come with dimensions of  305.31 x 220.8 x 7 mm (12 x 8.7 x .28 inches). A 12-inche tablet has been long rumored to come from Apple; here is how it sizes up to other Apple devices. 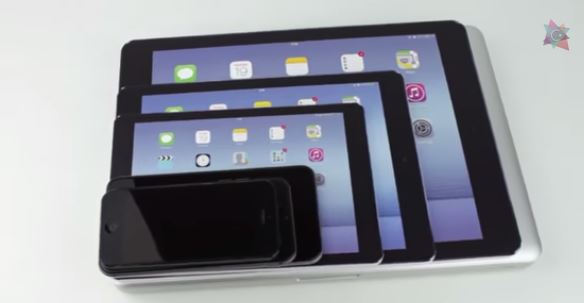 We saw increased momentum in the leaks and rumors around the device especially in the months preceding the iPhone 6 duo and iPad mini 3, iPad Air 2 launch. However, it stopped after the launch giving an impression that Apple might want to put the device for a later year considering its adventurous embarking of releasing larger iPhone 6 and iPhone 6 Plus smartphones.

With the latest stream of leaks and dimensions details, we can still keep up with the iPad Air Plus release of early 2015 in the books. This release date was speculated earlier in the year and even the latest rumors are in line with the suggestion of iPad Air Plus launching in second quarter of 2015. Here is a pretty good video where iPad Pro mock up has been compared to other Apple devices including last year's iPhone, this year's iPhone 6 duo, both the latest tablets including the mini and the Air, and finally the 13-inch MacBook.

It is quite an interesting video specifically because it gives a fair idea of how big this upcoming tablet from Apple would be. And trust me, it looks GIANT! While we are still not sure why is Apple considering such a big tablet, it has been suggested that iPad Air Plus is being mainly designed to replace the 13-inch MacBook. The tablet might get some variations in the OS to take advantage of such larger real estate.

It should also be noted here that Apple is losing out to other companies when it comes to tablets built for education. With such a high market in education, Apple might have considered to build a tablet purely for education purposes. We will see how good and light the upcoming larger tablet is and how it is going to be adopted by consumers. Launch expected in Q2, 2015 as mentioned before.