Apple yet again proved to present something better, something more powerful in this year's tablet launch. While the iPad mini 3 was nothing but the previous year's mini iPad getting another digit, Apple did induce some charms in the Air 2. iPad Air 2 is not only the thinnest tablet in the market - its major selling point - but also one of the most powerful, as the latest iPad Air 2 benchmark results reveal.

Apple fitted in the improved A8X processing chip in its latest iPad Air 2. The enhanced SoC carries 3 billion of transistors instead of 2 in the A8. A8 has itself been proved to be quite a strong chip as it powered the latest iPhone 6 duo. However, there were still more surprises hidden under that airy tablet that Apple did not talk about.

Latest iPad Air 2 benchmark from Geekbench reveal that Apple has used a tri-core processing chip in the Air 2 where each core is clocked at 1.5 GHz, instead of 1.4 GHz of A8. This actually settles why Apple needed another billion of transistors and also why it is being marketed as one of the most powerful tablets. With two larger iPhone 6 models on the product page, Apple had to define clear boundaries and selling points for its smartphone and tablet categories. While previously Cupertino has powered the tablets with same chips, things have changed for the current iPad Air 2 as it boasts not only an improved chip but also quite an unconventional addition of a third core along with 2 GB of RAM.

This configuration definitely takes the tablet up to the par of something like Nexus 9 which is powered by the leading Nvidia Tegra K1 SoC. While the Tegra still leads the competition in single core computation, Apple has done something intelligent by offering 3 cores and offering an amazing multi-core performance. Here are the iPad Air 2 benchmark results of the tri-core Cyclone: 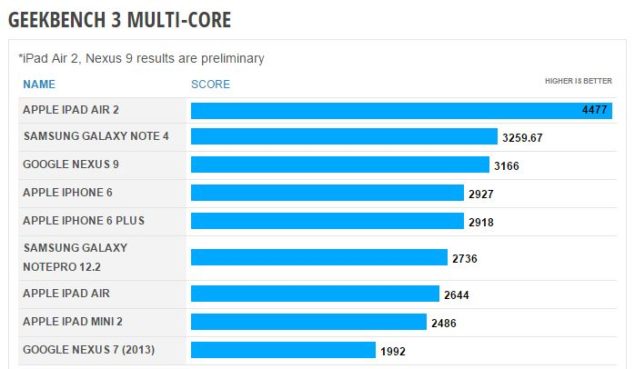 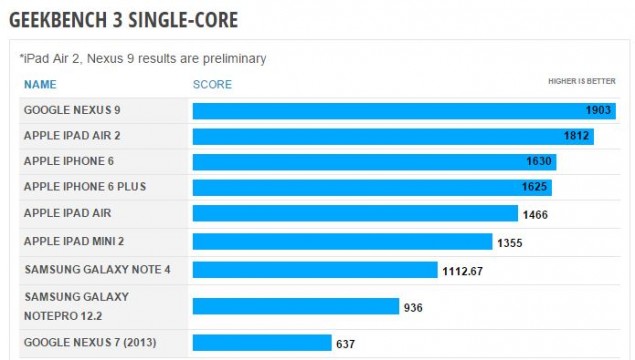