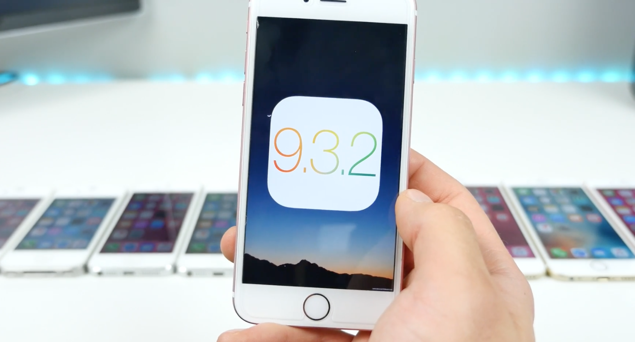 If you go through the changelog of iOS 9.3.2 you'll come to realize that Cupertino's new piece of mobile software is no more than a maintenance release, aiming to keep our iPhones, iPads, iPod touch devices running as smooth as possible. But is there a possibility iOS 9.3.2 is far more snappier than iOS 9.3.1 in the real world? A video on YouTube by EverythingApplePro aims to reveal just that. And without spoiling anything for our readers, take a look at yourself and be the judge whether or not iOS 9.3.2 kicks iOS 9.3.1 in the shin in terms of performance.

As you can see in the video, iOS 9.3.2 and iOS 9.3.1 are absolutely neck to neck when it comes to performance. While the former does outshine the latter in some places by an extremely small margin, but we wouldn't go on a limb at all and state that iOS 9.3.2 is a blazing fast release to come out of the Cupertino camp. But still, if you're seeking for a personal opinion we would suggest updating to iOS 9.3.2 right away to reap its bug fixing benefits. Besides, who doesn't want their iPhone or iPad to tick along smoothly in day to day use, right?

If you're an iPad Pro 9.7-inch owner then it should be worth pointing out that there are reports flying on the Web stating that iOS 9.3.2 is bricking said tablet, throwing a dreaded 'Error 56' at users. To make sure that doesn't happen to you, we would suggest that you hold back from updating your tablet for a while, as there's a chance Apple would either push out an updated version of iOS 9.3.2 with the necessary fixes packed into it, or we could just land on iOS 9.3.3 in an extremely short period of time. It totally depends on the route which Apple takes and we can't say anything for sure right now.

Meanwhile, we highly recommend that you check out the video above and make your mind up whether you want to stick with iOS 9.3.1 or iOS 9.3.2. And if you updated to iOS 9.3.2 or not, do let us know about it in the comments section below. We love to hear back from our readers!

Apple Stops Signing iOS 9.3.1, Here’s What It Means For You