Apple has just released iOS 9.1 beta 4 for compatible iPhone, iPad and iPod touch devices as well as the third beta of tvOS to developers who are in the possession of the new 2015 Apple TV.

Apple has been slowly and steadily pushing updates for its pre-release software for quite a while, aiming to make the overall experience as smooth as possible for the end user. Today, the company saw it fit to push out the fourth beta of iOS 9.1, which is due for release when the 12.9-inch iPad Pro hits shelves some time in November. Apart from that, the Cupertino tech mammoth also pushed out a third beta of tvOS, the software that powers the new 2015 Apple TV.

If you already have a previous beta of iOS 9.1 installed, then simply navigate to Settings > General > Software Update to grab the fourth beta straight away. Also be vary of the fact that your device must be charged beyond the 50% mark if you want to go ahead with the installation. Lastly, you must be connected to a WiFi network in order to download the update. If you have less than 50% battery on your device but are connected to WiFi, then the installation process won't go forward in that case, and you'll be required to connect your device to a power outlet. 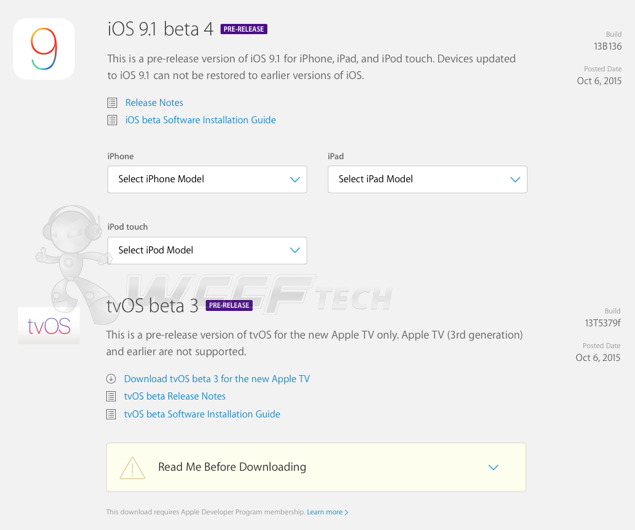 iOS 9.1 beta is also available as a public pre-release build, and if you're feeling the urge to try it out on your iOS device then you can do so right away. Simply check out our guide posted here for more details on the matter: iOS 9.1 Public Beta Now Available, Here’s How To Download It Right Now.

The last beta of iOS 9.1 brought with it new and refreshed wallpapers, and apart from that, things remain unchanged, other than the fact that the software brought with it bug fixes and performance enhancements to make everything smooth as possible.

tvOS on the other hand, is the software that powers the new 2015 Apple TV, which is also set to go on sale later this year. The new set-top box is packed to the rafters with a bunch of new and great features, such as support for third-party apps and games, as well as Siri, allowing you to search for TV shows and movies right from the comfort of your couch and voice.

We highly recommend all developers to update their devices straight away to reap the benefits of the new updates Apple has pushed out to those enrolled in the Apple Developer Program.

Update: iOS 9.1 Public Beta 4 has been released as well.