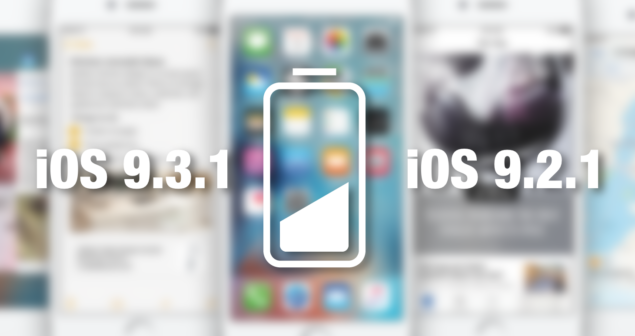 Apple has been accused of crippling devices in terms of battery life and performance with every new release of iOS. While that has remained true in a lot of cases, but some releases have actually managed to push the limits regarding battery life. With that out of the way, is iOS 9.3.1 better than iOS 9.2.1 when it comes to battery life? A newly surfaced video on YouTube aims to answer that question, but using a simple, non-scientific test.

Without any spoilers, check out the video down below.

Rather than opting for a real-world test comparing iOS 9.3.2 versus iOS 9.2.1, iAppleBytes instead opted to run the Geekbench battery test on all the devices he was testing out.

Before running the test, each device was charged all the way to the 100% mark and left to charge 30 minutes extra before the plug was removed and the Geekbench test was run.

First we charged all devices to 100% let them sit in the charger for an additional 30 minutes. Ran Geekbenchs test on all devices until the battery died, and filmed every wonderful moment.

We did this on iPhone 4S, iPhone 5, iPhone 5S and the iPhone 6. Using the same physical device to ensure the same battery life, first on iOS 9.2.1 and then again on the same device upgraded to iOS 9.3.1

Interestingly enough, the iPhone 4s managed to last the longest in terms of battery life in both the tests - running iOS 9.3.1 and iOS 9.2.1. But of course, that sort of battery life can be handed to the fact that the device has a smaller display topped off with a measly processor. But still, we can't conclude from this test that Apple has crippled battery life with every new hardware release, since this is indeed a non-scientific test, all handled by software.

While we do agree to the fact that Apple has indeed done some poor battery life work recently, but one can't deny the features which the company has tossed into the mix over the years as well. We're still hopeful at this point in time Apple will eventually answer all our battery life related woes with a proper solution, rather than with things like Low Power Mode etc.