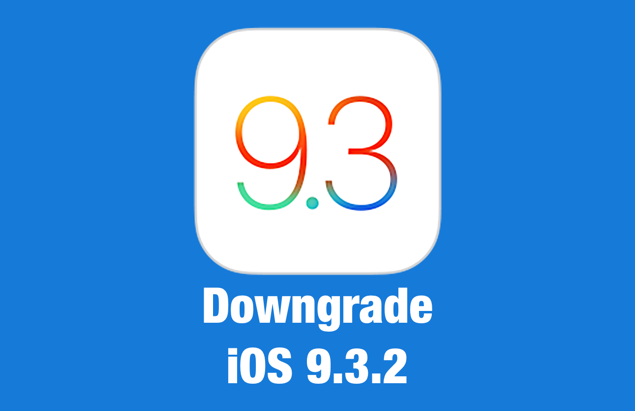 2. Backup everything to iTunes or iCloud.

3. Connect your iPhone, iPad, iPod touch to your PC or Mac using the supplied USB cable.

4. Launch iTunes. If you don't have iTunes installed already, then you can do so by heading over to apple.com/itunes.

5. Select your iOS device from the top left hand corner of iTunes.

6. Hold down the left Shift key (PC) or the Option key (Mac) and then click on the 'Restore iPhone' button in iTunes.

7. iTunes will now verify the iOS 9.3.1 IPSW file with Apple's servers and the downgrade process will then begin.

Do not touch your device while the iOS 9.3.2 downgrade is in process. You want everything to go through as smoothly as possible with minimal of fuss. Once the downgrade is complete, you'll boot into the fresh sight of iOS 9.3.1's welcome screen.

It's worth mentioning here that while iOS 9.3.2 is the latest public release of iOS 9 available from Apple, iOS 9.3.1 is still being signed concurrently as well, making the downgrade process possible. This also means that Apple will, at one point, stop signing iOS 9.3.1, killing the downgrade process altogether, leaving users on the latest public release rather than the one which was released before it.

In other words, if you're looking to downgrade your device, then now is the time to do it before Apple ceases to sign iOS 9.3.1 firmware. And we can only take a wild guess when that might happen. It could happen later today, tomorrow, or maybe after a week. But still, hesitating might put you in a troublesome position so go with the downgrade without giving it a second thought.

If you're seeking for a personal advice, I would recommend that you upgrade to iOS 9.3.2 straight up as it brings with it a handful of bug fixes and performance improvements. Also, iOS 9.3.2 introduces a cool new trick which users have been wishing for quite some time - the ability to use Night Shift with Low Power Mode. If none of that floats your boat and have reasons to stick with iOS 9.3.1, then you're more than welcome to downgrade.

Given that you did downgrade iOS 9.3.2 to iOS 9.3.1, then be sure to let us know about it in the comments section below.