According to newly published numbers, iOS 9 is now on 12% of devices worldwide after just 24 hours of release.

Apple flipped the switch for iOS 9 download just yesterday around this time, and since then it has seen a staggering growth. But interestingly, it is seeing the adoption rate same as that of iOS 8, which was released last year. For comparison, iOS 7 was adopted far more quicker compared to iOS 9 and iOS 8 both. The slow rate of iOS 9's adoption can be handed to the fact how Apple's servers took a beating when people flocked in droves to grab the latest update.

According to Mixpanel, who released the data:

iOS 9 has received 12% adoption in the last 24 hours and is being adopted similar to iOS 8 last year. However, one issue for it being substantially slow compared to iOS 7 is that servers are having trouble keeping up right now as people update. 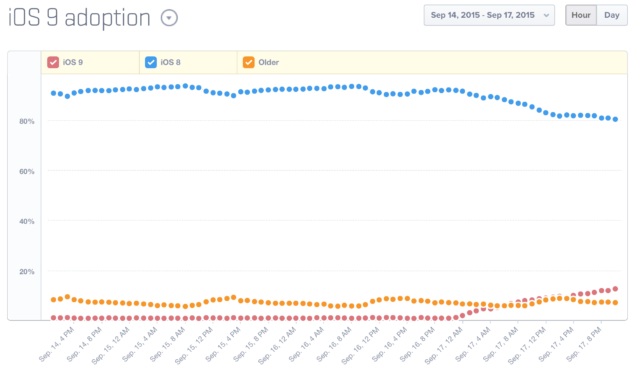 These numbers will turn very interesting as we move one month ahead, only then we'll get to know how much uptake iOS 9 really has. But given how many positive things we're hearing about iOS 9 already, it seems as though Cupertino's mobile OS will blast past iOS 8's adoption rate really soon.

iOS 9 is the latest mobile operating system to come out of Cupertino, and builds on top of the solid foundations of iOS 8. While Apple has packed in a bunch of new features to entice users to upgrade, the company has also made sure that every device is compatible with its latest firmware. To put things into perspective, the iPhone 4s from 2011 also gets the taste of iOS 9. But the story doesn't end there, the iPad mini as well as the iPad 2 both get Cupertino's latest installment of its mobile OS.

iOS 9 is only a day old and we'll hear more good and bad about it in the day to come as users start to scrutinize the firmware in a wide number of ways. Even we are hunting for gems as we speak, and we'll bring them to our readers, so stay tuned for that.

If you haven't updated to iOS 9 already, then be sure to check out: How To Download / Install iOS 9 On iPhone, iPad, iPod touch The Right Way.

Are you one of the many who installed iOS 9 on their iPhone, iPad or iPod touch? If yes, then be sure to let us know in the comments section below how you like Apple's new mobile firmware.