After sharing with you the app launcher to launch as many as six apps right from your iOS 7 lock screen, here are a couple other tweaks to help you enhance the features of your iOS 7 and increase the ease and accessibility.

Apple has the time and duration set to lock your iOS powered device when left unattended. You can customize this autolock duration using LongerAutoLock iOS 7 jailbreak tweak. This tweak will help you keep your specified time until your device is put back to sleep. Easier and quicker to unlock if you don't own an iPhone 5s with fingerprint scanning ease. 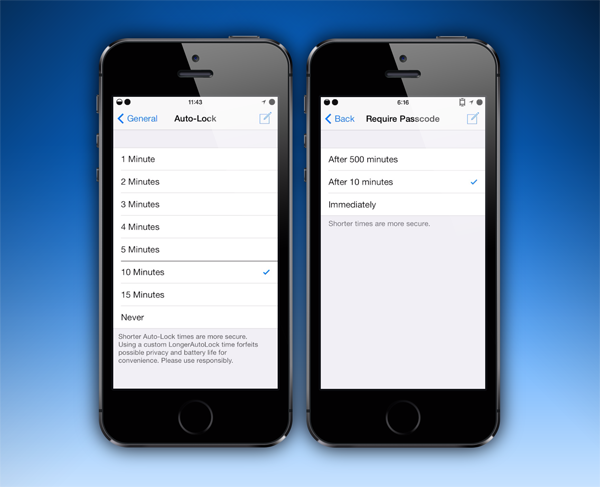 Read: See ‘iOS in the Car’ in Action Running on an iOS 7 Simulator!

Alternative: One other such lock screen auto-lock jailbreak tweak is PassTime. PassTime iOS 7 lets you specify the time before your devices asks you for a password. This will be helpful if you have to lock and unlock it repeatedly to set a time duration for passcode query. This would be especially helpful for those moments when you are communicating with someone and don't want to enter passcode every other minute. All the while it ensures that your device is kept safe after longer intervals.

LongerAutoLock and PassTime iOS 7 jailbreak tweak are both developed by same developer. This actually gives you a good deal of "buy one, get one free!". Both these tweaks are available at BigBoss repo in Cydia. Available for $0.99, if you purchase one, you can get the other for free.

Let us know if you have tried these two iOS 7 lock jailbreak tweaks.