How to Use iOS 7 Burst Mode on Older Devices?

A new Camera feature in iOS 7 is Burst Mode which lets you take several pictures in rapid succession during a shot span of time. Simply tap and hold on the shutter button from the Camera app to capture any high-speed event to make sure you do not miss it! iOS 7 Burst Mode [Read: iOS 7 features I & the iOS 7 Features II] is actually pretty useful and efficient feature to give you out some amazing memories.

the two volume keys to activate it. For the users on older devices, or those on iOS 6, iOS 7 Burst Mode can be used with a new jailbreak tweak. So if you have a jailbroken device, you can use this amazing camera feature. 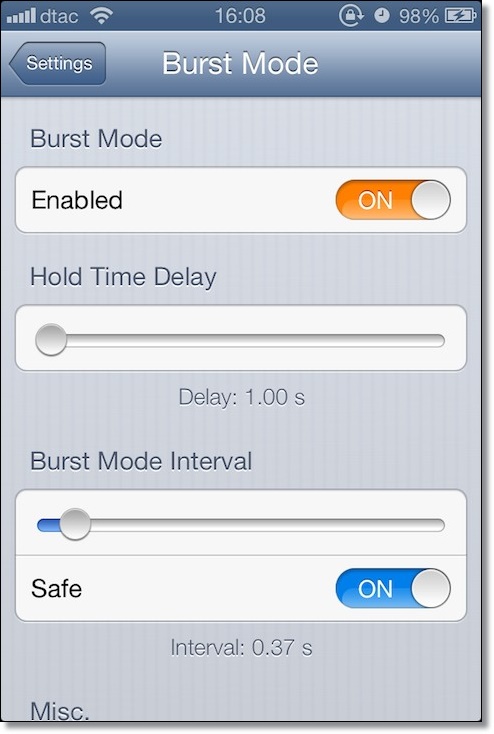 Developed by PoomSmart, this Burst Mode tweak works as same as on the iOS 7. In fact, unlike Apple's Burst Mode, this tweak has no limits on photos. Tweaked Burst Mode feature also has got some additional settings that you can turn off or on for those pictures. You can enable or disable iris animation, preview animation, live preview, and also choose to enable burst mode from HDR or with the LED flash.

Once you have installed this tweak, you can enable the tweak via toggle switch to start using it. You can adjust the time of delay and the interval at which burst photographs are taken.

iOS 7 Burst Mode is available for FREE in Cydia's BigBoss repository. Compatible with iOS 5 and iOS 6 on iPhones, iPad and the iPod Touchs, this feature will help you capturing some hi-speed images.