Finally we see some development related to the public release of iOS 6.1, Apple's upcoming major update to its mobile platform. Earlier today seeded another beta of this upcoming update hence registered Apple developers can now download iOS 6.1 beta 5 IPSW from the Developers Portal. 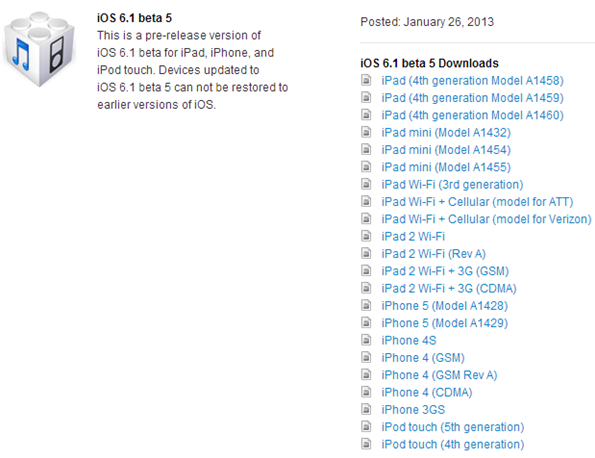 It is absolutely normal for Apple to seed a number of betas to developers only before making the public release of an upcoming firmware update. Incremental updates do appear from time to time and are directly pushed out to the end user. When it comes to major updates, such as iOS 6.1, the company makes sure that developers get maximum opportunity to test out the new update as well as get their apps ready for it. The beta program for iOS 6.1 started late last year and today the developers registered with Apple can download iOS 6.1 beta 5 IPSW for their respective devices.

This new beta comes merely a couple of weeks after it was rumored that the company is ready to roll out iOS 6.1 GM build to developers. The only difference between a GM build and a beta version is that the former is considered almost ready for public release, which takes place shortly after the GM build is seeded to developers. On the other hand a beta version may be succeeded by another one if the bugs and issues have been been addressed properly.

iOS 6.1 beta 5 is probably going to be the last beta before the GM build is released. It seems as if Apple is trying to get it spot on with this new update, considering that iOS 6.0 failed to live up to its expectations with various users complaining of numerous bugs and issues. Lets not forget the Apple Maps application as well, which is going to be greatly improved in iOS 6.1.

So if you're a registered Apple developer, go ahead and download iOS 6.1 beta 5 on your iPhone, iPad or iPod touch right now. The general public probably just has to wait patiently for only a couple of weeks now for the end user release of iOS 6.1 firmware.