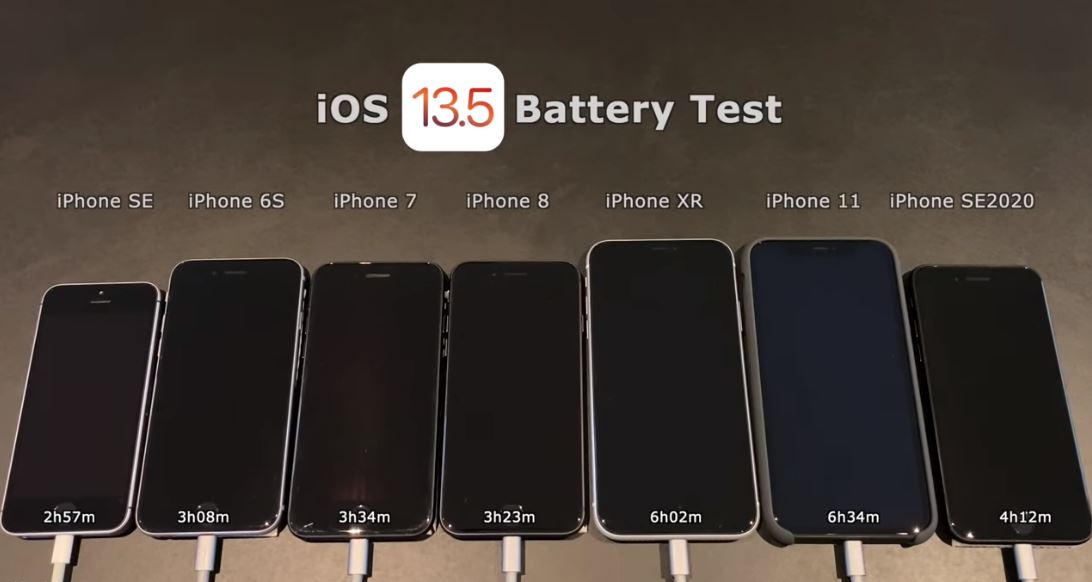 iOS 13.5 was released to all users last week holding significant additions like the COVID-19 contract tracing API. However, there are bound to be other additions as well pertaining to performance and battery life. We have already covered iOS 13.5 speed test against iOS 13.4.1 and now, users must be wondering how the battery performance stacks up.

Here's How the Battery Life Compares on All iPhone Models on iOS 13.5 Against iOS 13.4

For your ease, YouTube channel iAppleBytes have conducted a battery performance test on a wide range of iPhone models which includes the 2020 iPhone SE, iPhone 11, iPhone XR, iPhone 8, iPhone 7, iPhone 6s and the iPhone SE. All iPhone models were running iOS 13.5 and the test was conducted a week after so everything settled in well.

In the Geekbench battery rundown test, the iPhone 11 was the last standing iPhone with 6 hours and 34 minutes on iOS 13.5 which is roughly the same amount of time it took to rundown on iOS 13.4. iPhone XR was the runner up with 6 hours and 2 minutes on iOS 13.5, a major decrease compared to iOS 13.4 that lasted 6 hours and 20 minutes. Take note that the smaller iPhone models with small batteries will tend to last not as much as the iPhone XR and iPhone 11. However, the 2020 iPhone SE ran through 4 hours and 12 minutes.

Check out the video embedded above for more details on the iOS 13.5 battery test. As can be seen in the video, iOS 13.5 does not bring anything major to the table as far as battery performance is concerned. If not better, your iPhone should last more or less the same time as it did on iPhone models running iOS 13.4 or iPhone 13.4.1.

That's all there is to it, folks. Have you installed the latest iOS 13.5 on your iPhone? How has your experience been? Let us know in the comments.