Talk about the craze for having more than one display. We've seen the Dual Panel monitors from EVGA, and dual slide out screen notebooks from gScreen. We've even seen a slightly different take on the technology thanks to ATI Eyefinity which can connect up to a freakin' 24 displays to one PC thanks to their latest ATI Radeon Eyefinity GPUs. But none of that is in line with what Intel has shown - a single Notebook with 4 display screens on it with multitouch support. 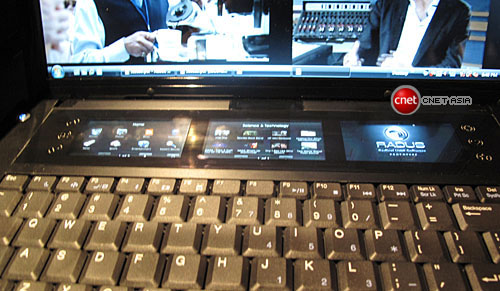 Codenamed Tangent Bay, the Notebook boasts one primary LCD along with 3 auxiliary OLED displays just above the keyboard, allowing you to multi-task in ways never imagined before. The prototype device was shown at a local community event at San Fransisco, instead of being on display at the Intel Developer Forum which was kind of surprising for me. Since the event was invite only, so we didn't get to have a lot of information on the device.

What we do know is that the screens support all the regular multi-touch gestures and that you can drag and drop content between them. Other details about when this device would go into production (if it ever will) are still missing. But Crave does have a couple of more photos and videos for you to crunch on. As for me, I'm not impressed by any Intel news now after finding all those dirty anti-competitive tactics it pulled off.

Intel May Face More 14nm CPU Shortages in Q2 2019, AMD Notebook Market Share To Increase Significantly With Ryzen Mobile From 10% in Q1 To More Than 18% in Q2