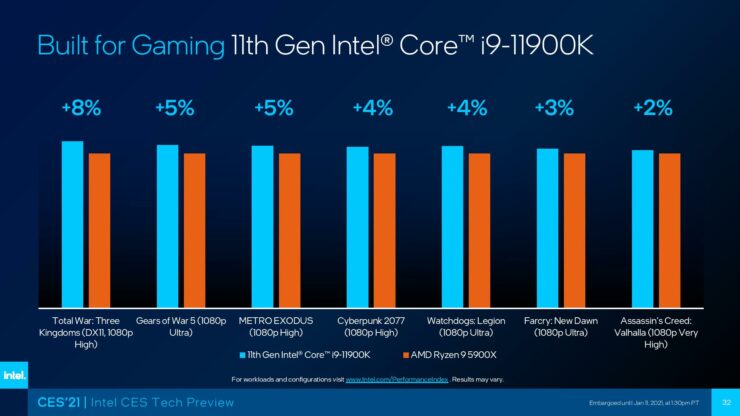 Intel has just teased its Rocket Lake S CPU at CES 2021 and the company shared some gaming benchmark sessions with us to put some steam into the hype train. Rocket Lake will be the company's first PCIe 4.0 mainstream platform and will represent a major step up from the countless iterations of Skylake. According to our sources, the platform is expected to launch in March 2021 but before that, we have some gaming performance to share.

As you can see, Intel's Rocket Lake CPU, the Core i9-11900k officially, is an absolute beast. It is itself an 8-core affair but not only does it go toe to toe with AMD's latest generation Ryzen 5900X 12-core processor in gaming performance - but it actually beats it by a small margin. As with any first-party benchmarks, we would urge a grain of salt till independent testing is out but what is happening here isn't surprising. Gaming is highly clock rate dependant in terms of performance and Intel's 14nm is an extremely mature platform that can clock up to 5.3 GHz (an absolutely ridiculous clock for a mainstream processor). 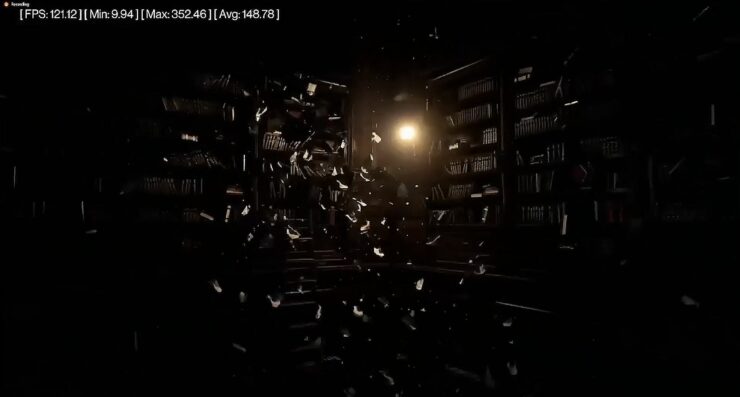 The gaming benchmarks which Intel covered include Total War: Three Kingdoms, Gears of War 5, Metro Exodus, Cyberpunk 2077, Watchdogs: Legion, Farcry: New Dawn and Assassin's Creed Valhalla. All games were tested on the 1080p graphics settings to truly test the capabilities of the CPU and make it the primary bottleneck. The difference in performance ranges from 8% in Total War (which is a very CPU intensive game) to 2% in Assassin's Creed Valhalla. On an aggregate basis, Intel's Core i9-11900k is 4.4% faster than AMD's Ryzen 5900X.

The company then proceeded to show the generational leap Rocket Lake brings when compared to the older generation Core i9-10900k processor (which is still based on Skylake). While the former flagship scores 129 frames per second in Hitman 3, the Core i9-11900k (powered by Rocket Lake) scores up to 140 frames per second. On an averaged basis, the difference in gaming, generation over generation is roughly 7% according to Intel's own tests. 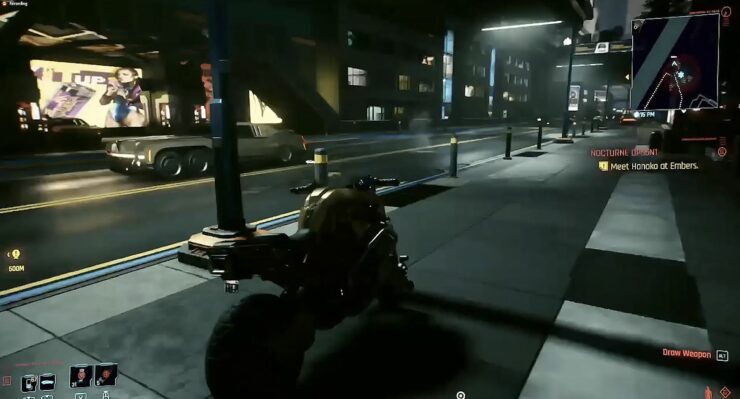 The company also then proceeded to show off a demo of Cyberpunk 2077 running (presumably maxed out) on the Rocket Lake S platform while coupled to an NVIDIA RTX 3080. While no performance numbers were given, the game seemed to be fairly smooth in the stream (any lag you see is due to my OBS software recording the stream). It is important to note here that Rocket Lake S features direct access to the SSD and the GPU using the PCIe 4.0 which is shaping up to be an incredibly important feature in the future of gaming. Games are already being designed with asset streaming tech, and this will be a must-have feature for high-end gamers.

You can watch the full preview over here: