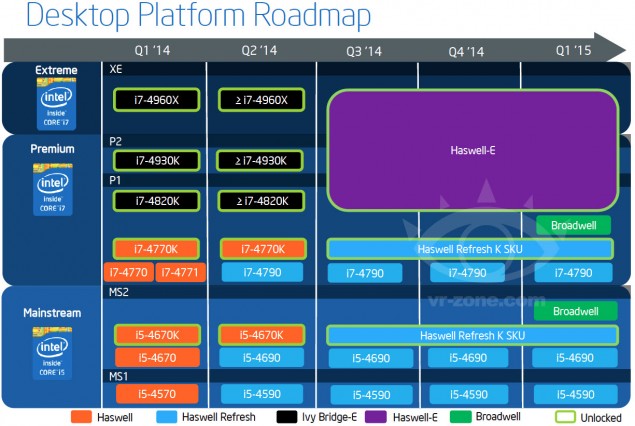 From what we have heard and previously reported, Intel will only paper launch these processors on 2nd June at Computex 2014. They will also host an overclocking competition that would allow attendees and overclockers to test out the new Core i7-4790K and Core i5-4690K processors prior to launch. It is known that the new Devil’s Canyon processors ship with faster clock speeds, better packaging materials, design that’s built to sustain overclocking and most importantly, better TIM between the IHS and die of the processor to get better results while overclocking.

Several retail sites have listed the Core i7-4790K, Core i5-4690K and Pentium G3258 processors for pre-order prior to their launch but the actual sales won’t commence until end of September 2014. Users who have purchased the Z97 motherboards specifically for Intel Devil’s Canyon processors will have to look into Haswell and its Refresh series until Devil’s Canyon launches. We also received information that almost all of the motherboard makers are holding out for Devil’s Canyon to launch their high-performance and enthusiast minded Z97 boards. Currently, the Z97 boards available by ASUS, MSI, GIgabyte, ASRock haven’t seen the flagship parts such as the ASRock Extreme9, ASUS Maximus VII Formula, etc. These boards will be launched with Devil’s Canyon and marketed as proper overclocking boards with support for Devil’s Canyon. Following are the list of Devil's Canyon and Intel's 20th Anniversary Pentium processors which we expect to see in the market:

The Core i7-4790K will be the flagship processor of the Haswell Refresh lineup and the first 22nm consumer CPU to obtain clock frequency of 4 GHz and a maximum boost clock of 4.4 GHz which is also a first for Intel. It will feature 4 cores and 8 threads along with a fully unlocked design which will allow users to overclock the chip past the limits thanks to the improved thermal design and updated package materials. The Core i7-4790K will feature a 88W TDP and would come with the latest HD 4600 graphics chip clocked at 1250 MHz. The pre-order pricing suggest a retail cost of around $359.99 US.

The Core i5-4690K will be the fastest Core i5 Series processor of the Haswell Refresh lineup featuring a clock frequency of 3.5 GHz and a maximum boost clock of 3.9 GHz matching the specs of the Core i7-4770K in a way. It will feature 4 cores and 4 threads along with a fully unlocked design which will allow users to overclock the chip past the limits thanks to the improved thermal design and updated package materials. The Core i5-4690K will feature a 88W TDP and would come with the latest HD 4600 graphics chip clocked at 1250 MHz. Pricing is not known at the moment. The pre-order pricing suggest a retail cost of around $249.99 US.

Haswell-E In September Followed By Broadwell in Q1 2015

The roadmap also confirms that Haswell-E would be shipping to consumers in September 2014 which is the true HEDT platform for enthusiast and overclockers featuring support for next generation 8 and 6 core SKUs based on the Haswell 22nm die. The Haswell-E chips would be the first to support DDR4 memory on a socketed consumer platform.

Broadwell is also mentioned as a Q1 2015 product for desktops however all previous reports have pointed that it might slip past to Q2 2015. Sources suggest that Broadwell for desktops is pushed to May – June 2015 from its original launch period of Q1, the same year. While Intel is pushing Broadwell for mobility devices in Holiday of 2014 (Q4 2014), the desktop lineup would be further delayed. Broadwell would be the first 14nm consumer chip and would be headed to mobility platforms first in Q4 2014 followed by desktop chips in Q1 / Q2 2015.