We recently published an article on Intel's upcoming Devil's Canyon and Pentium 20th Anniversary Edition chips which were planned for launch on 2nd June 2014. However, we have just received information that suggests that the Intel Devil's Canyon processors would only be paper launched at the Computex 2014 event with availability of the chips planned for late September. 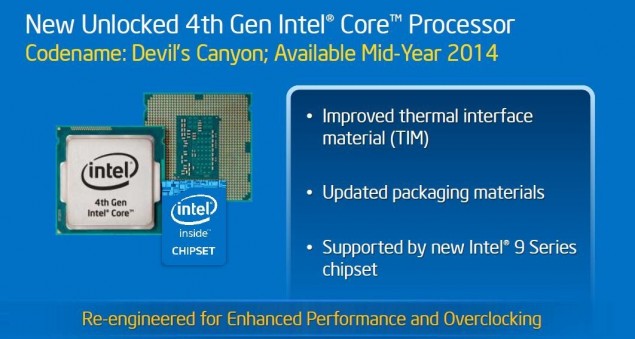 To be honest, this is somewhat disappointing as many users who have been waiting to try out something new on the latest Z97 motherboards will have to wait longer for the new Core i7-4790K and Core i5-4690K processors. It is known that the new Devil's Canyon processors ship with faster clock speeds, better packaging materials, design that's built to sustain overclocking and most importantly, better TIM between the IHS and die of the processor to get better overclocking results.

Several retail sites have listed the Core i7-4790K, Core i5-4690K and Pentium G3258 processors for pre-order prior to their launch but the actual sales won't commence until end of September 2014. Users who have purchased the Z97 motherboards specifically for Intel Devil's Canyon processors will have to look into Haswell and its Refresh series until Devil's Canyon launches.

While VR-Zone tells that this years Computex show will be more desktop oriented with Intel emphasizing a lot more than usual on their desktop users and platforms, their would be no actual chips available to prove it since Devil's Canyon will launch in September and Haswell-E which will be next generation HEDT lineup is also planned for launch around the same quarter. Aside from Intel's conference and booth, other manufacturers will actually be displaying several new motherboards based on Intel's high-performance X99 chipset which will be powering the LGA 2011-3 socket motherboards. I have also received information that almost all of the motherboard makers are holding out for Devil's Canyon to launch their high-performance and enthusiast minded Z97 boards. Currently, the Z97 boards available by ASUS, MSI, GIgabyte, ASRock haven't seen the flagship parts such as the ASRock Extreme9, ASUS Maximus VII, etc. These boards will be launched with Devil's Canyon and marketed as proper overclocking boards with support for Devil's Canyon.

On the other hand, Intel also seems to have pushed the launch of their next generation Broadwell K-Series and Broadwell processors for their desktop platform to Q2 2015 from Q1 2015. Sources suggest that Broadwell for desktops is pushed to May - June 2015 from its original launch period of Q1, the same year. While Intel is pushing Broadwell for mobility devices in Holiday of 2014 (Q4 2014), the desktop lineup would be further delayed.

Broadwell CPUs will be the first to adopt 14nm process technology and on the desktop parts which have been confirmed to feature Intel’s latest Iris Pro graphics chips. Intel Iris Pro graphics chips features double the execution units of the HD 4600 graphics chip (40 vs 20) and comes with its own 128 MB of on-package eDRAM codenamed ‘CrystalWell’. This super fast LLC helps deliver the Iris Pro graphics chip with 25.6GB/s + 50GB/s eDRAM (bidirectional) which fulfills its bandwidth requirement. The Crystalwell eDRAM is located on a separate package on the CPU die.

We can also confirm that just like Haswell, Broadwell will have a Voltage Regulator on chip. There will also be a power controller on chip. This will allow as much as C10 level of low power state computing. the U and H variants will both have a Extreme Tuning Utility which will allow easy overclocking of both the CPU and GPU. In such a case, we can obviously expect better performance from the Broadwell line of Core processors.

But as much great the Iris Pro chip sounds for Broadwell, it should be pointed that the Haswell processors with GT3e graphics ended up with much higher prices compared to those with HD Graphics. Intel may add a cut down variant of the Iris Pro chip on desktop variants to reduce prices keeping them at the same levels as Haswell and Ivy Bridge before it otherwise it will just add more cost to these chips. I also don’t see the point of adding the Iris graphics on flagship Broadwell processors considering the users will almost certainly end up buying a discrete graphics card that offers better performance. The Iris Pro graphics will however become a much better deal in some budget tier Core i3 and Core i5 chips which could be placed directly against AMD’s Kaveri and next gen of Carrizo APUs that arrive in 2015.