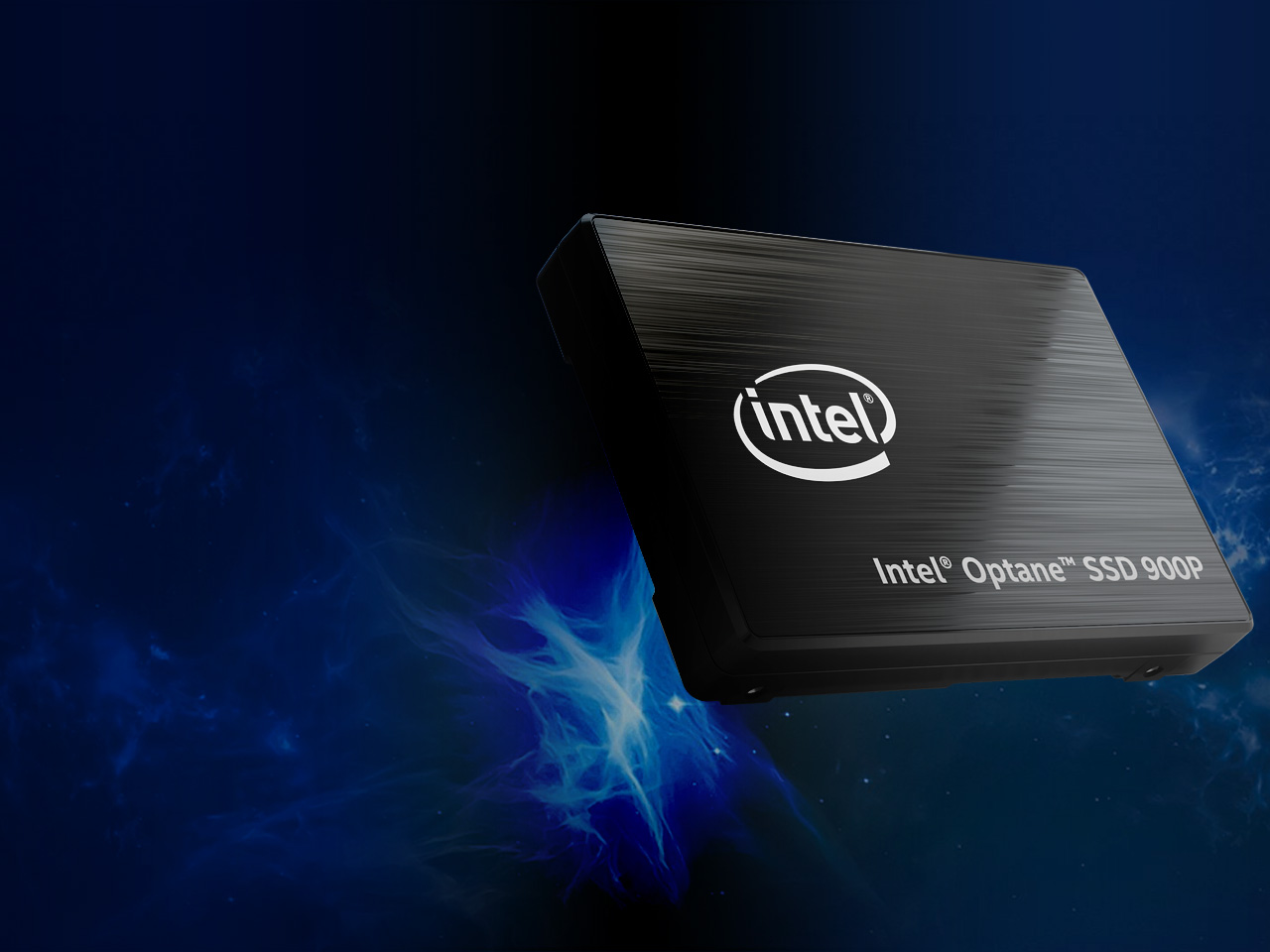 Intel has finally launched their first consumer grade 3D XPoint product, the Optane SSD 900P. The new Optane SSD 900P aims to be a revolution in the storage industry as they are aimed at the high end, enthusiast tier machines where users demand the best performance possible.

The Optane SSD 900P is based on 3D XPoint which is Intel's latest Non-Volatile Memory solution. Intel has previously introduced a range of products designed with 3D XPoint that include the DC P4800X SSD that was aimed at Data centers, they also launched the Intel Optane memory which acts as an intermediary solution between storage and memory to boost system responsiveness.

Today's launch is for the high-end spectrum as the Optane SSD 900P is designed for enthusiasts and workstation users. The Optane SSD 900P is going to be available in two form factors, one is a PCIe 3.0 x4 expansion card which comes with its own black colored shroud and backplate. The second form factor is the 2.5" bay drive that connects to a U.2 interface. The SSDs will be available in two capacities at launch, a 280 GB model and a 480 GB model. The price for the 480 GB model is set at $599 US while the 280 GB model will retail for $389 US. These prices are rather lower than what the industry had expected, but still remain higher than the $/GB standard set by other SSD manufacturers. However, the key factor here is the performance in which the Optane SSD 900P is miles ahead of the competition. 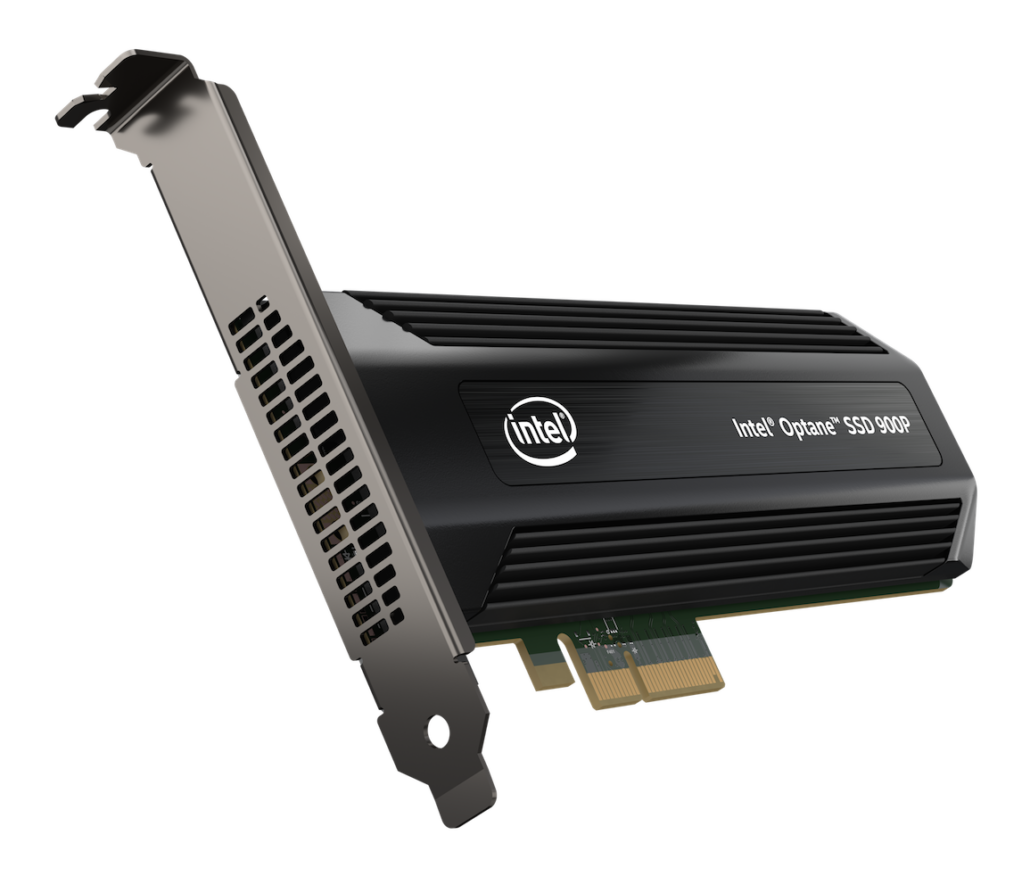 With non-volatile memory, the biggest advantage is in low latency. Intel and Micron have already stated in their conferences that 3D XPoint is going to be 1000x faster in terms of read and write speeds while featuring a 1000x longer lifespan. Some numbers provided by Intel show that their Optane SSD 900P has random 4K read and write speeds of 550K/500K IOPS, Sequential read and write speeds of 2500/2000 MB/s, latency of less than 10uS and an endurance rate of up to 8760 TBW (for the 480 GB model). This is insane and at data center level as current flagship SSDs have a endurance rating of under 500 TBWs. 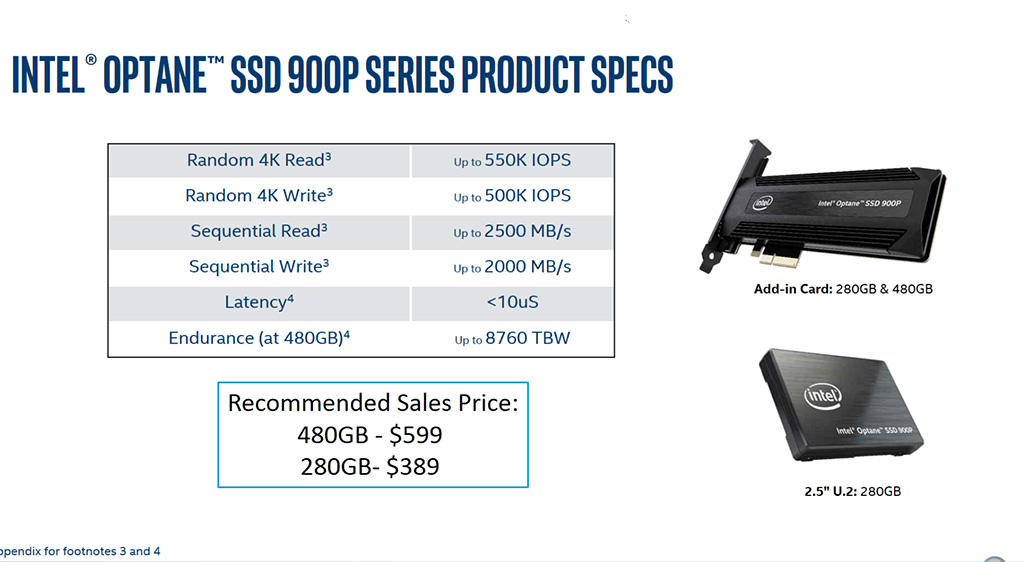 While there are independent reviews that we will mention below, Intel has also provided a look at their own performance testing of the 900P versus the Samsung SSD 960 PRO. The results that will show both performance and power efficiency in a range of SPECwpc V2.1 benchmarks such as "Media and Entertainment", "Product Development" and "Life Sciences" show significant gains. As seen, the Intel SSD 900P system is up to 3 to 5 times faster than Samsung's 960 PRO drive. 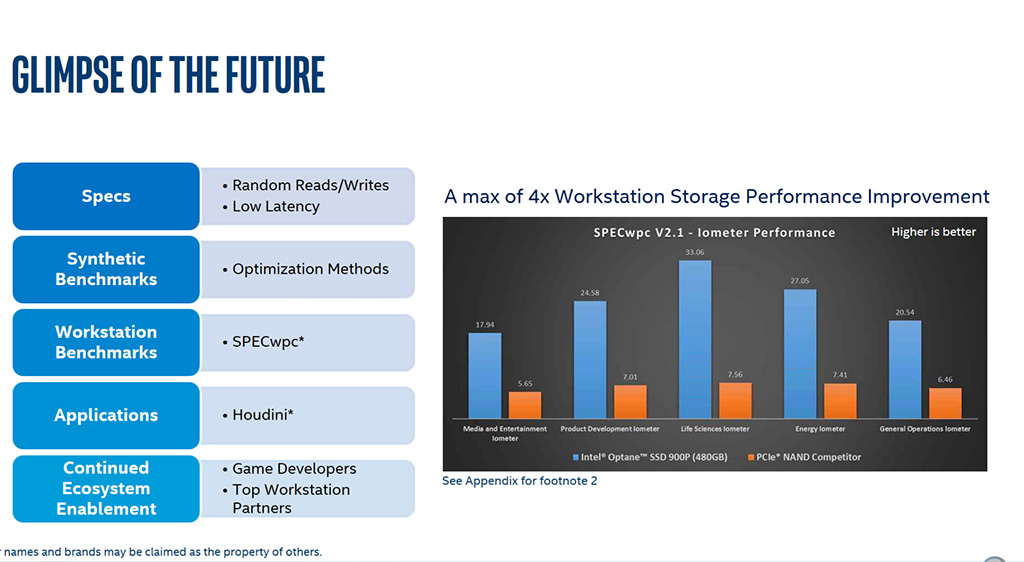 Another example provided by Intel shows the performance in rendering time where the 900P is able to render a 7 second scene of a maelstrom in Houdini (Video Rendering) in just 6.3 hours compared to 17.4 hours on the Samsung drive. Two things happened here, not only was the rendering time sped up by 2.7x, the system utilization during that time also increased by 2.75x which shows that Optane 900P also delivers an entire system boost rather than just storage boost. The lower latency and delay means that data is sent through the system without any interruption and can be processed immediately.

As it comes to it again, the drive is built for enthusiasts and workstation developers who want the best performance. For general mainstream consumers, there is still a small wait before Optane 3D XPoint arrives in lower price brackets but till then, the fastest Optane option on the consumer side remains the 900P. The Intel Optane SSD 900 is additionally bundled with a copy of Star Citizen (Not Squadron 42) and also an exclusive Space ship known as Sabre Raven. 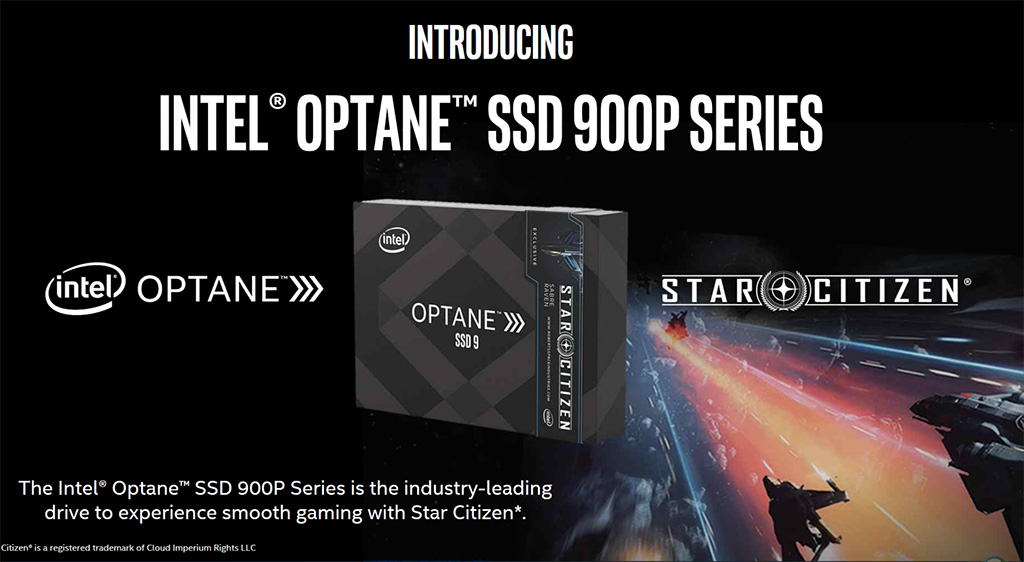 And lastly, following are AnandTech's and PCPerspective's take on the new Optane SSD 900P:

The wait is over, the SSD 900P is here, and it's even more affordable than I was expecting. The product was well built and nicely packaged, but it's the 3D XPoint on the inside that enthusiasts are truly after, and it did not disappoint.

The price is a bit on the high side, but you won't find a similarly priced client/workstation storage device that can come anywhere close to the SSD 900P's responsiveness, low latency, and high endurance anytime soon!

The Intel Optane SSD 900P is an amazing piece of technology, but one whose benefits are difficult to fully enjoy. Its 3D XPoint memory enables it to break almost all the performance records, but some where difference to Optane SSD performance is too small to justify paying more than twice the price per GB. However, there are some scenarios where the Optane SSD absolutely blows away the competition and justifies its premium.

Following are the official product pages of the different Optane SSD 900P models directly over at Intel. They are available for purchase now and come bundled with the Star Citizen game and ship as mentioned above.