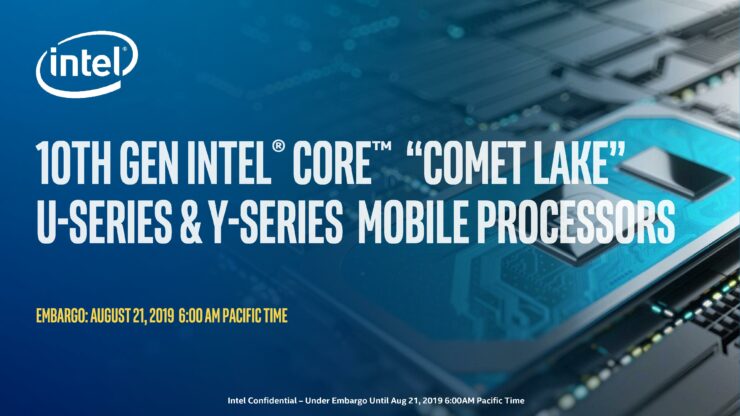 Intel today announced their 10th generation mobility processors dubbed "Comet Lake" which scale up to 6 cores / 12 threads and a massive 4.9GHz turbo (a very impressive number in the mobility world). For those that followed our Intel 10th generation "Ice Lake" coverage a while back, you could understandably be confused so I will address this from the start: the major difference between Ice Lake and Comet Lake processors is that ICL is the bleeding edge 10nm process while as CML is the highly mature 14++ (+?) process from Intel with great clock speeds.

Intel has already launched its 10nm 10th generation processors but it appears it doesn't want to miss out on the opportunity accorded by its highly mature 14nm process and that is where Comet Lake comes in. For those of you that want blazing fast clock speeds, and were not satisfied with Ice Lake's clock rates, this lineup is for you. 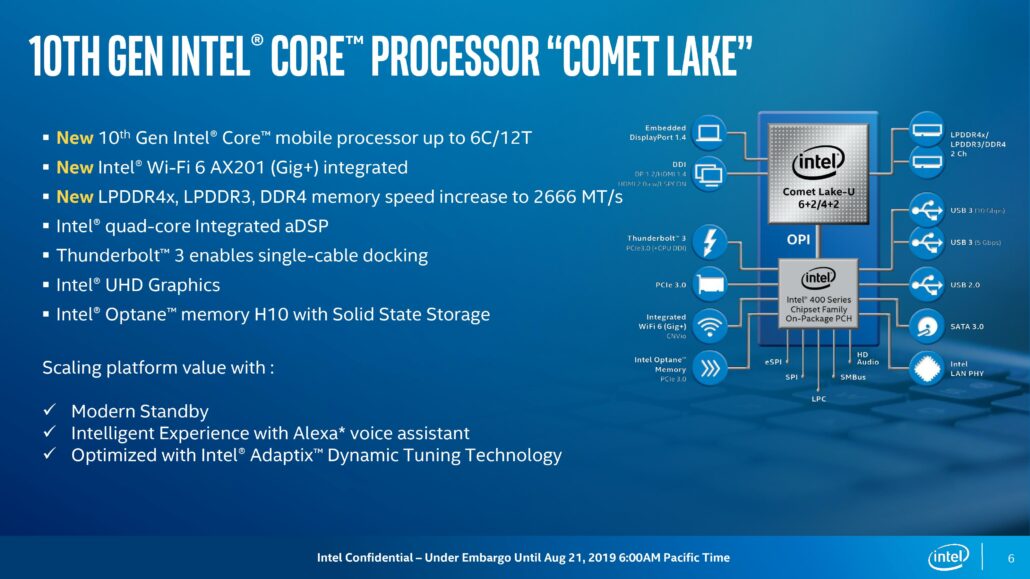 Intel's 10th Generation Comet Lake is based on the Intel 400 series chipset with an on-package chipset. It supports Intel Optane memory as well as the usual bells and whistles such as WiFi 6 and LPDDR4x and Thunderbolt 3. What it does not have is Intel's brand new Iris graphics and supports the usual UHD Graphics affair.

Then there is the question of what you should buy? Well, if you are looking for a laptop that is a powerhouse and has excellent performance ratios, then go with Comet Lake. If you are looking to game on your integrated GPU or you want the latest hardware codecs and decoders then go with Ice Lake. If you are someone that works with AI or deep learning then you should almost certainly go with Ice Lake as well.

Here is Intel's official blurb should you be interested in reading it:

The new mobile PC processors (formerly code named “Comet Lake”) are tailor made to deliver increased productivity and performance scaling for demanding, multithreaded workloads while still enabling thin-and-light laptop and 2 in 1 designs with uncompromising battery life3. These processors are performance powerhouses that bring double-digit performance gains compared to the previous generation1. The lineup also includes Intel’s first 6-core processor in the U-series, faster CPU frequencies, faster memory interfaces and the industry re-defining connectivity with Intel® Wi-Fi 6 (Gig+) and broader scaling of Thunderbolt™ 3. More than 90 additional designs based on the 10th Gen Intel Core processor family will hit the shelves for the holiday season.

“Our 10th Gen Intel Core mobile processors provide customers with the industryleading range of products that deliver the best balance of performance, features, power and design for their specific needs. From multitasking to everyday content creation, the newest additions to the family scale performance for even higher levels of productivity - in addition to offering best-in-class platform connectivity via Wi-Fi 6 (Gig+) and Thunderbolt 3 that people expect with 10th Gen.”

Why It Matters: Taking advantage of Intel’s world-class portfolio of technologies and intellectual property, the 10th Gen Intel Core processor family delivers a range of workload-optimized platforms to address diverse computing needs and experiences. The new 10th Gen Intel Core processors leverage the improvements in intra-node optimizations on Intel’s highly optimized 14nm process technology that enable up to 16% overall performance gains1 and over 41% better productivity and multitasking on

Microsoft Office 365* compared to the previous generation2 – all without compromising battery life3. Additionally, they integrate the best wireless connectivity with Intel WiFi6 (Gig+)4 and support Thunderbolt 3, the fastest and most versatile port available5.

Earlier this month, Intel launched the first products in 10th Gen Intel Core processor family, which were developed on the 10nm process technology and focus on bringing high-performance artificial intelligence (AI) to the PC at scale, a big leap forward in graphics performance, and the best-in-class connectivity. The new processors introduced today share the same leading platform connectivity, while expanding the family with processors for scaling performance and frequencies for modern productivity workloads. The result is a complete family of processors that complement each other, giving people choices for what usages matter most to them and reimagining the possibilities of a modern laptop experience.

People can also expect the same great connectivity across the entire 10th Gen Intel Core processor family. Integrated Intel® Wi-Fi 6 (Gig+) brings enhanced WPA3 security for additional peace of mind and is nearly 3x faster6 to enable quick file downloads and more responsive performance throughout the home. Systems with these processors can also support a Thunderbolt 3 controller enabling up to four Thunderbolt™ 3 ports, each one capable of delivering power, download speeds of 40 Gb/s and connecting to the thousands of docks, displays and peripherals in the market, all via a single cable.