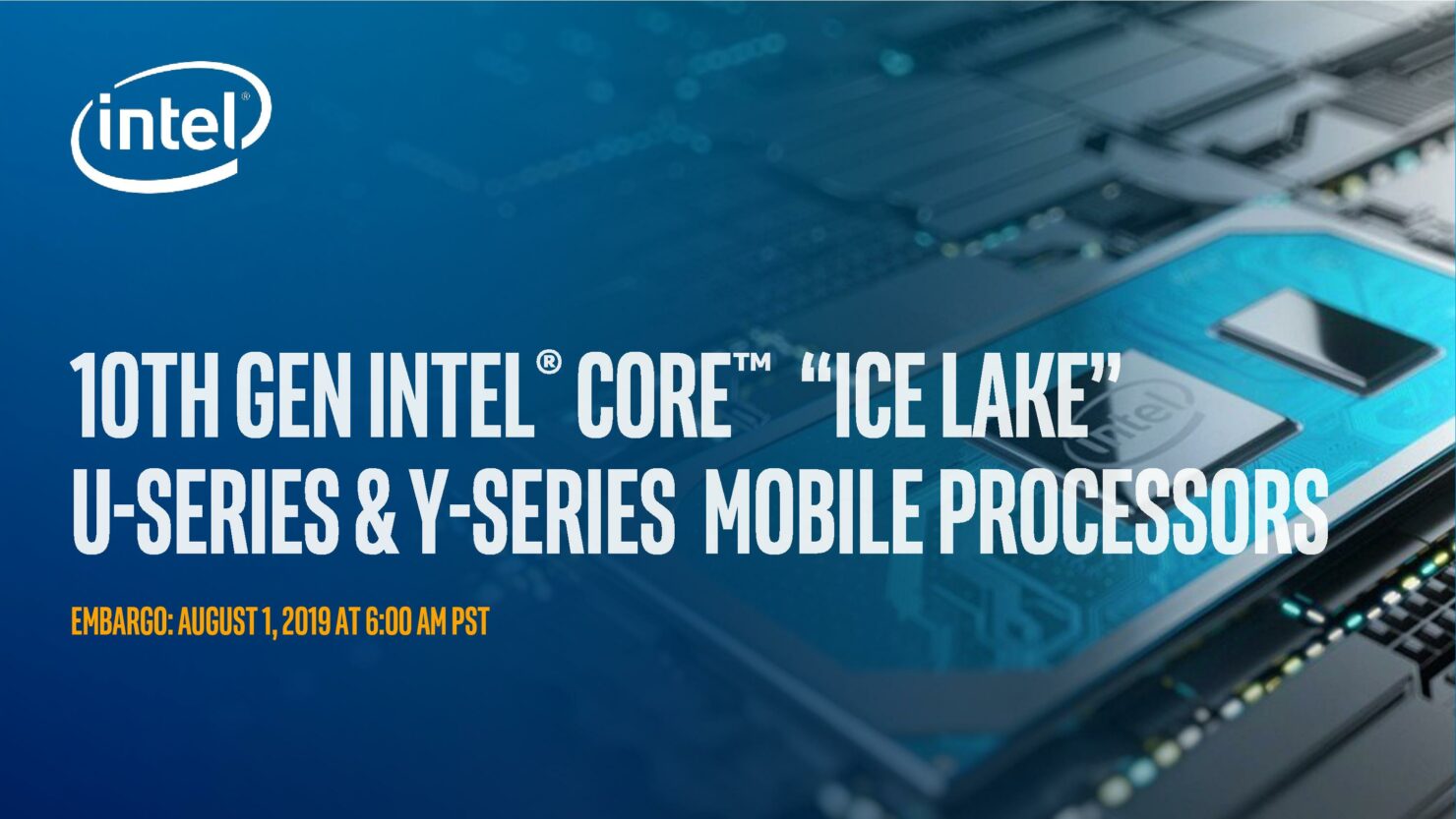 10th Generation Ice Lake processors support Wifi 6 and Thunderbolt 3 with memory support up to 3200 MHz on DDR4. The iGPU is nothing to sneeze at either with Iris Plus boasting up to 64 EUs. All core boosts are pretty strong at up to 3.6 GHz and single-core boosts go up to 4.1 GHz. This is one launch you will want to watch out reviews for since IPC is going to play big part here. 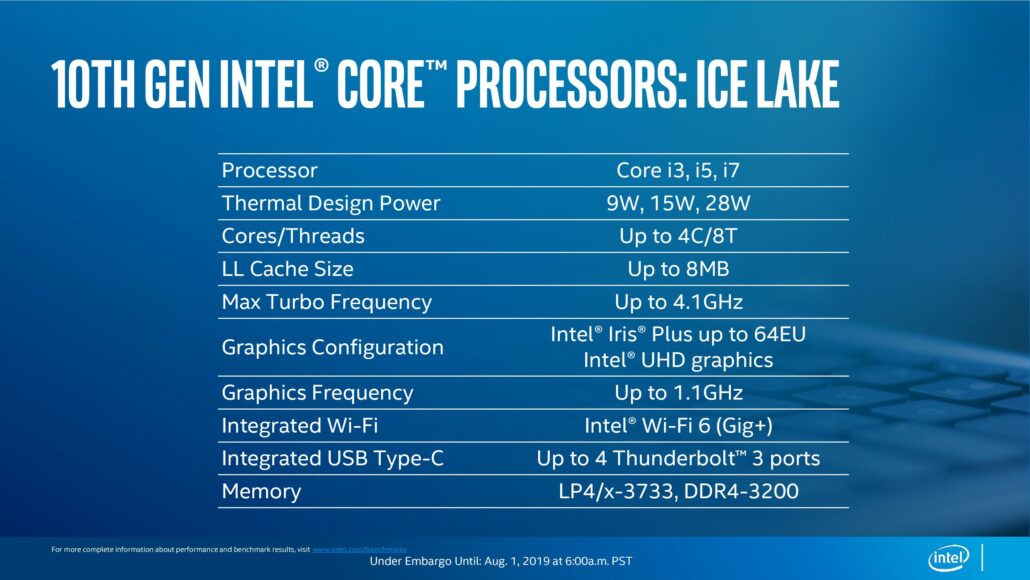 Some pretty exciting things are under the hood of the new Ice Lake architecture, something we have covered in detail before and also includes the first 1 teraflop iGPU from Intel that can actually handle a decent amount of workload. Here is what Intel had to say about the launch:

“These 10th Gen Intel Core processors shift the paradaigm for what it means to deliver leadership in mobile PC platforms. With broad-scale AI for the first time on PCs, an all-new graphics architecture, best-in-class Wi-Fi 6 (Gig+) and Thunderbolt 3 – all integrated onto the SoC, thanks to Intel’s 10nm process technology and architecture design – we’re opening the door to an entirely new range of experiences and innovations for the laptop.” -- Chris Walker, Intel corporate vice president and general manager of Mobility Client Platforms in the Client Computing Group.

Marketing jargon aside, the company has achieved some pretty impressive IPC gains with this architecture, notice that instead of the usual "compared to 5-year-old pc" they are actually using "compared to prior gen" here. 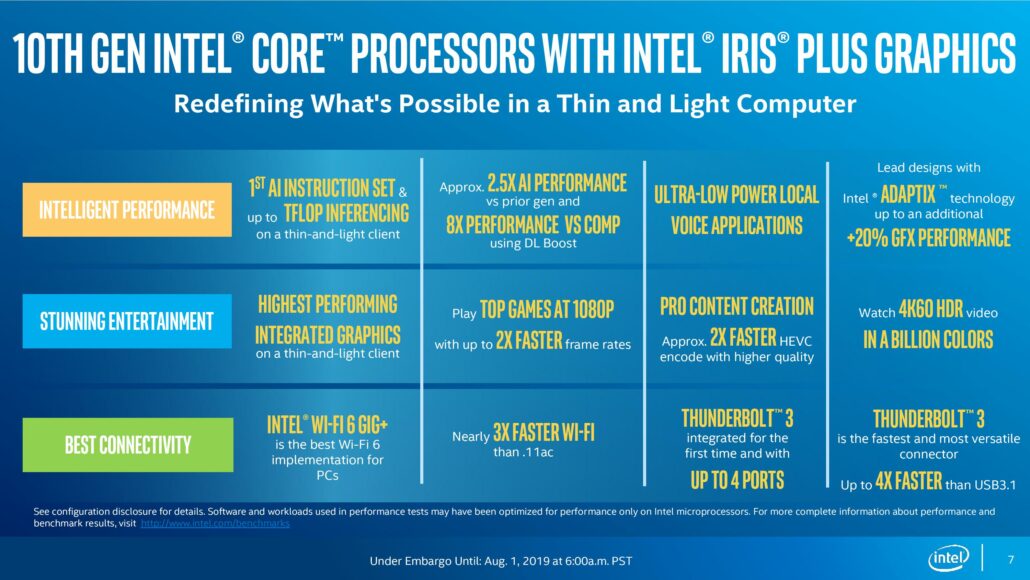 Some new features in Intel's Ice Lake processors include:

Intel's 10th generation 'Ice lake' processors consist of 11 CPUs broken into U and Y series designations. The Y series designation is reserved for the ultra low voltage ultra book environment whileas the U series is the standard mobile processors for laptops. This marks the first time Intel has shipped 10nm processors in volume and the point in time where you can safely say that the company has ironed out its 10nm woes.

The U Series processors consist almost entirely of quad cores with 8 threads. It is led by the flagship Core i7-1068G7 CPU with a 3.6GHz all core turbo (4.1 GHz single core), 8MB Cache and 28W TDP. This is the only processor which does not appear to have a configurable TDP.

All other processors on this list have a configurable TDP of either 15W or 25W. The Core i7 1065G7 has an all core turbo of 3.5 GHz and a single core turbo of 3.9 GHz. Interestingly, however, its base clock speed is almost an entire GHz lower than the 1068G7.

Finally, you have the Core i3-1005G1, which is the only dual-core in the lineup and has an all-core clock of 3.4 GHz with only 4MB of cache.

For the Y series lineup you have three quad cores and two dual cores. All processors on this list have a configurable TDP of 9W/12W.

The Core i3-1000G4 and Core i3-1000G1 both have the same specifications for the CPU side but the G4 has access to the superior Intel Iris Plus iGPU while the G1 only has the standard Intel UHD iGPU.