Intel has officially announced their upcoming Devil's Canyon processors which are also regarded as the Haswell Refresh K-Series. Built for overclockers, the Devil's Canyon processors which include the Core i7-4790K and Core i5-4690K feature impressive specifications and a new design scheme which allows better overclocking and more performance out-of-box. 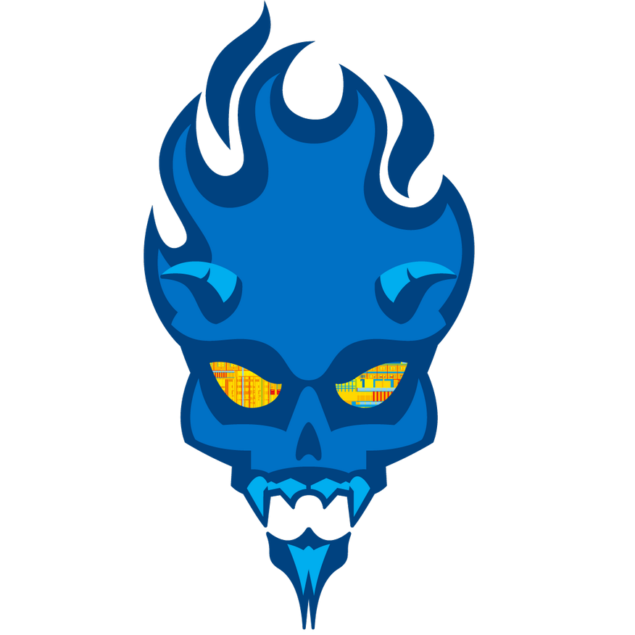 Update - The livestream video has been embedded to the article along with the initial results that are posted on HWBOT. Team MSI has won the $5000 US prize by claiming the Devil's Canyon Air/Liquid world record achieving a core clock of 5498 MHz or 5.498 GHz. Team ASUS has managed 5515 MHz on a single Devil's Canyon core. Team Gigabyte have also won $4000 in the LN2 competition by cranking 6331 MHz or 6.331 GHz on all four cores and 6409 MHz on a single core.

Watch live video from OverClockingTV on www.twitch.tv
The Core 4000 series processors based on the Haswell microarchitecture were launched a year ago at Computex 2013. The processors featured the latest 22nm core 3D Tri-gate transistors technology which improved the IPC and efficiency by a decent amount of Ivy Bridge. While the Haswell processors were met with a great response and backed by a variety of overclocking features, the processors didn’t happen to be great at overclocking due to the cheaper application of TIM between the IHS (Internal Heat Spreader) and the Haswell silicon itself which resulted in the heat to remain trapped between the chip due to poor contact.

Intel seems to finally be fixing this issue once and for all with their upcoming Haswell Refresh processors. The K-Series Haswell Refresh processors in specific are codenamed Devil’s Canyon which would offer users an improved design that incorporates updated packaging materials, improved TIM (Thermal Interface) and processors that are specifically re-engineered for enhanced performance and overclocking. So many users who have been waiting for Intel to update their TIM design since Ivy Bridge can now check out the new processors for their overclocking needs. To be specific, Intel is going to use Next Generation Polymer Thermal Interface Material (NGPTIM) inside their Devil's Canyon processors offering better heat dissipation to allow overclocking.

The Core i7-4790K will be the flagship processor of the Haswell Refresh lineup and the first 22nm consumer CPU to obtain clock frequency of 4 GHz and a maximum boost clock of 4.4 GHz which is also a first for Intel. It will feature 4 cores and 8 threads along with a fully unlocked design which will allow users to overclock the chip past the limits thanks to the improved thermal design and updated package materials. The Core i7-4790K will feature a 88W TDP and would come with the latest HD 4600 graphics chip clocked at 1250 MHz. The pricing is suggested around $339.99 US.

The Core i5-4690K will be the fastest Core i5 Series processor of the Haswell Refresh lineup featuring a clock frequency of 3.5 GHz and a maximum boost clock of 3.9 GHz matching the specs of the Core i7-4770K in a way. It will feature 4 cores and 4 threads along with a fully unlocked design which will allow users to overclock the chip past the limits thanks to the improved thermal design and updated package materials. The Core i5-4690K will feature a 88W TDP and would come with the latest HD 4600 graphics chip clocked at 1250 MHz. Pricing is not known at the moment. The pricing is suggested around $242.99 US.

Aside from the Haswell based Core processors, Intel also announced their 20th Anniversary Pentium edition unlocked processor. The Pentium G3258 is a dual core with two threads featuring a core clock of 3.2 GHz. It doesn’t come with Turbo Boost tech but will be supported on both 8-Series and 9-Series platforms unlike Devil’s Canyon which will feature support on just the 9-Series chipset based Z97 motherboards. Featuring the 22nm Haswell architecture, the chip comes with 3 MB of L3 cache and a TDP of 53W. The instruction set includes SSE4.1, SSE 4.2, EM64T and VT-X. The box prices suggest a retail cost of around $72.99 US.

As far as launch and compatibility is concerned, motherboard makers are trying their best to release BIOS for their Z87 products that allows Devil's Canyon support. So far, ASUS has been successful to offer one and we have already seen the results regardless of the targeted compatibility with Z97 chipset based motherboard. As for launch, the processors will hit retail by June 21st while boxed variants will come to global markets by August 2014. 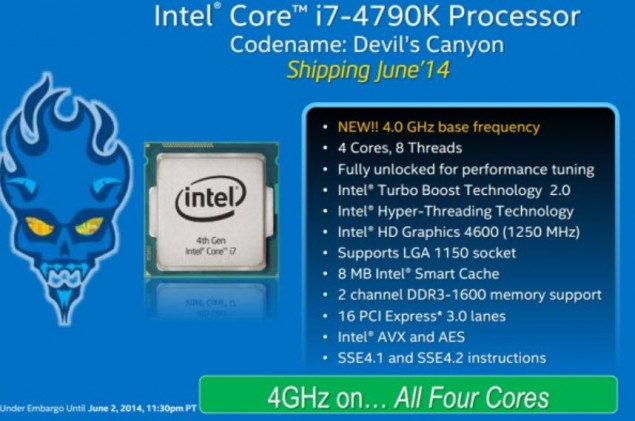 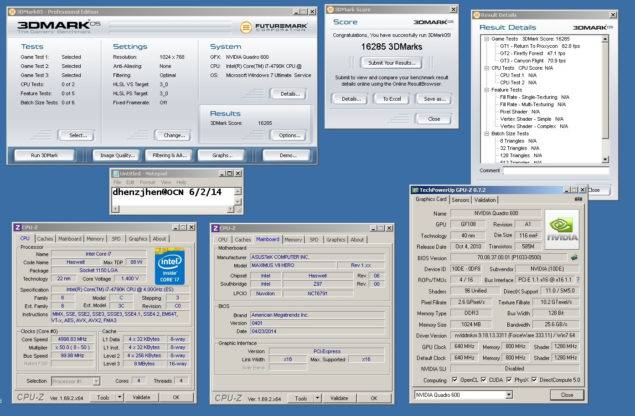 We will start seeing some official results in just a few minutes since the Devil's Canyon OC event hosted by Intel is going to begin soon. Infact, we already have a verified 5 GHz result of the Core i7-4790K which was maintained at 1.400V from Overclock.net forums user "Dhenzjhen@OCN". The chip was able to deliver a score of 16285 3D Marks in 3DMark 05 which heavily relies on the CPU performance. From what i've heard, this overclock was done on air so we can be looking at some big numbers when LN 2 cooling comes in to action.

Intel Devil's Canyon processors also transfer all the great overclocking features introduced on Haswell as detailed in our review such as a dynamically adjustable and fully unlocked Turbo Boost Technology limit that ensures users get the most out of their processors when they need it. Core ratios have been unlocked  upto 80 in 100 MHz increments while the CPU voltage is completely controllable via the iVR (Integrated Voltage regulator). DMICLK or BCLK allows for an unlocked PCH clock controller with increments upto 200 MHz while PEG and DMI will offer variable/adjustable ratios based on the BCLK frequency. Similarly, the GPU core also features an unlocked design that allows for frequency adjustments (60 Ratio in 50 MHz increments) and fully programmable voltage via iVR. An unlocked memory controller allows for upto 2933 MHz overclock on the DDR3 modules.

Intel has provided key details on the upcoming iVR through which voltage on CPU and GPU could be dynamically adjusted. Currently, voltage management is accomplished with the use of external VRM’s on the motherboard. There are in total four voltage override modes through the iVR module on Haswell chips which are accounted for when running the processor in default and overclocking mode. With the next generation Haswell processors, we would be looking at an increased BCLK of greater than 167 MHz (non-continuous) compared to the peak 116.95 MHz on Ivy Bridge along with a select CPU PEG/DMI ratios of 5:5, 5:4, 5:3 which is quiet impressive. The next few slides details various performance tuning ratios available on Haswell core for CPU/GPU/DDR/PEG,DMI and Ring. 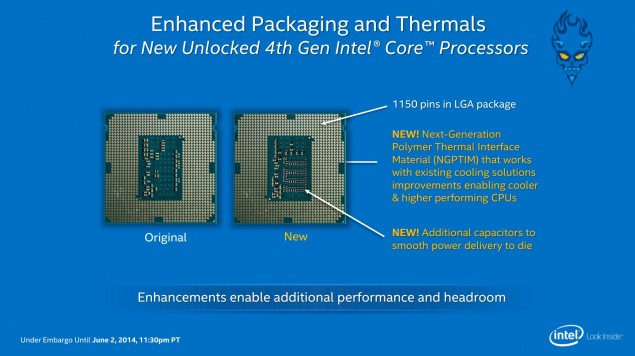 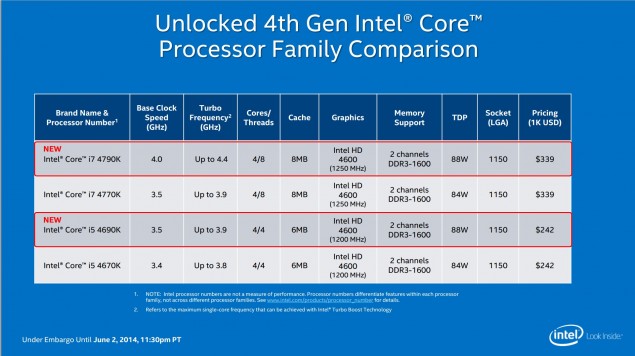 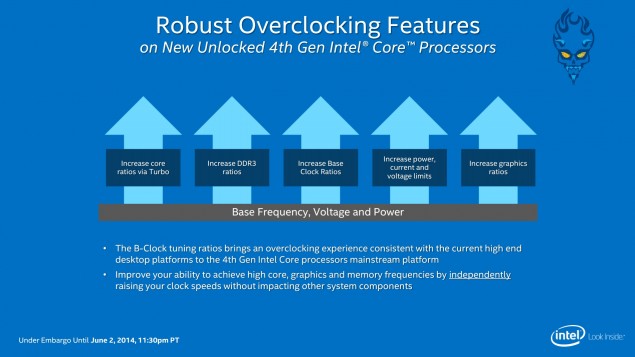 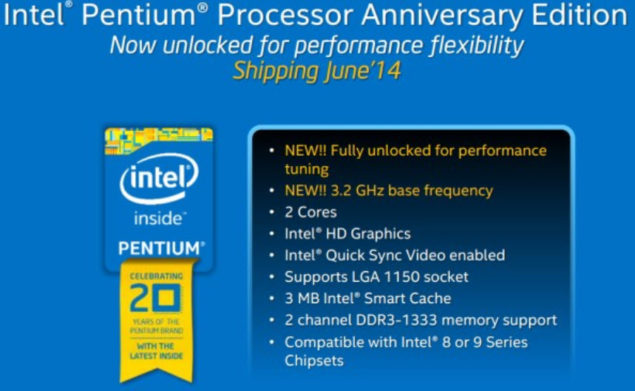 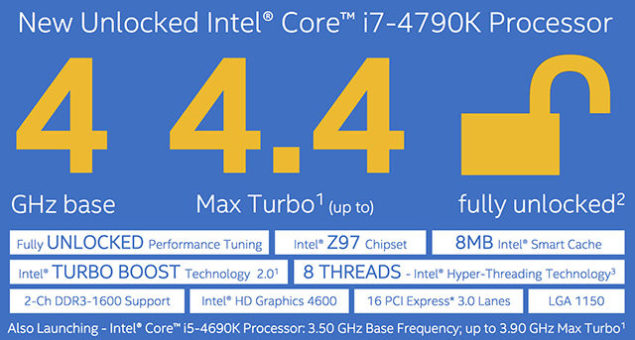 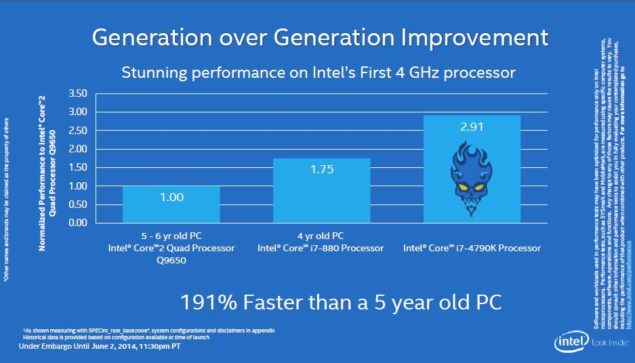 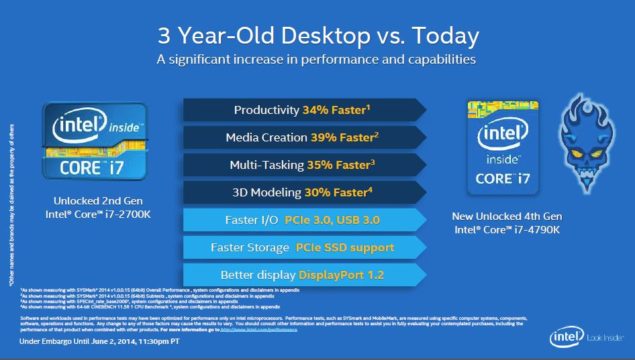