Intel will be announcing their overclock oriented Devil's Canyon processors at Computex tomorrow which will include the Core i7-4790K and Core i5-4690K. The Intel Devil's Canyon processors are officially said to work only with the 9-Series chipset based motherboards however there have been recent reports that some motherboard makers may allow compatibility with their Z87 chipset based products. 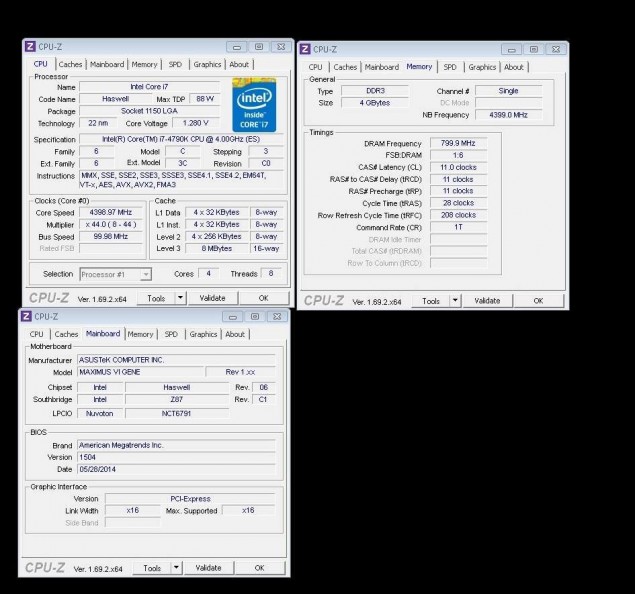 Yesterday, we posted an article that ASUS was offering a BIOS update that would allow Devil's Canyon processors to work on their Z87 motherboards. This has been confirmed by overclocking enthusiast Kevin Owi who posted an screenshot of the Core i7-4790K (ES) processors running on ASUS's MAXIMUS VI Gene motherboard that launched last year. The motherboard was updated with the latest v1504 BIOS which we detailed yesterday and acquirable from ASUS's official website to allow Devil's Canyon compatibility with Z87 chipset based motherboards.

There was already reports that motherboard manufacturer's are already running internal validation tests on 8-Series boards to add support of Devil’s Canyon processors through an upcoming BIOS when the processors are available. This will in return call in excess of sales of a handful of Z87 parts whose sales have been disrupted by the arrival of the new Z97 boards. Do keep in mind that we have seen some impressive designs on the Z87 generation of motherboards hence overclock support on the year old boards would be as great as the current 9-Series products. ASUS has previously violated the Z97 motherboard NDA with Intel by launching their products prior to launch and this could be another violation where Intel's rules and regulations are being disrupted.

This will also add more longevity and support for Z87 motherboards until Broadwell arrives early next year. There are a lot of consumers who are currently using the Z87 chipset based motherboards and would get frustrated to switch to another board when upgrading to a Devil’s Canyon processors. This would end if the BIOS ships in time, eliminating the need to switch or upgrade to a new motherboard based on the 9-Series chipset.

However, as much good as this sounds we should all be aware that this is currently a rumor and nothing official has been said. Motherboard manufacturer’s did try to do something similar last year when they tried to enable OC support for Haswell on Non-Z motherboards. Termed as Non-Z OC support by ASRock, several motherboard makers which include ASUS, Gigabyte and Biostar hopped abroad this bandwagon and started offering BIOS which ended the restriction allowing users to easily overclock on their H87 chipset based motherboards. But Intel soon retaliated and started actively blocking Haswell Non-Z OC For K-Series Processors on H87/B75 Motherboards asking vendors to release a second BIOS few weeks later to end this support. So we shouldn’t just yet keep our hopes high and wait for the official announcement tomorrow on June 3rd at Intel’s Computex 2014 seminar.

Intel is hosting a OC event tomorrow at Computex 2014, so we expect so see some overclock numbers along with launch dates for the Devil's Canyon processors which has now been adjusted around June 15-21 for the inital tray shipments while the boxed retail variants won't hit the market two weeks from that possibly going into early August. Following is a chart which shows the specifications of upcoming Devil's Canyon processors: 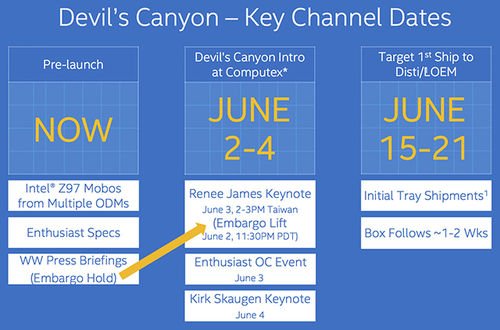