A couple of days back we informed you of the fact that motherboard manufacturers might allow Intel's Devil Canyon CPU support on Z87 motherboards. Intel is to announce the CPUs at this year's Computex. The Devil's Canyon series consists of two variants, the Intel Core i7-4790K and Core i5-4590K. Officially, only the Z97 chipset will fully support the Devil's Canyon SKUs with full compatibility for their overclocking features. Only Intel's 20th Anniversary Pentium series is to work with both 8 and 9 series chipsets. 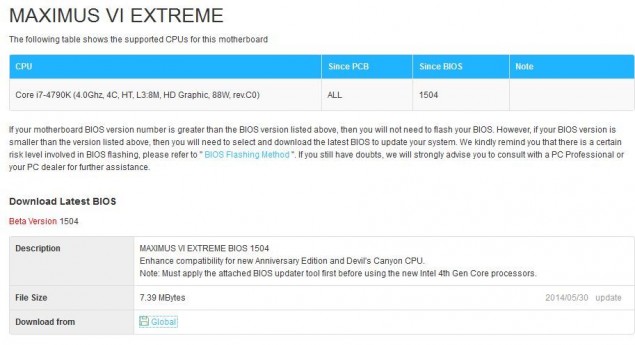 We received information from the french website hardware.fr that motherboard manufacturers might try to remove the restriction for Devil's Canyon on 8 Series Chipsets. A manufacturer had informed the French that internal validation tests on the Z87 boards for Devil's Canyon through an upcoming BIOS update were already underway. It should be kept in mind that architecturally speaking, the Z87 boards are similar to the Z97 boards. The only hurdle in the way is BIOS support. We know that officially, 4th Generation K-series will not be supported by the Z87 chipset at the time of it's launch. Already however, we have seen no heed being paid to restrictions imposed by Intel on motherboard manufacturers. This was in the form of blatant NDA violations by manufacturers through offering of 9 Series boards online prior to their official launch date set by Intel. Interestingly, in that case as well, it was ASUS who had taken the lead by posting official pictures and renders of its Z97 boards prior to their official launch.

ASUS has also taken the lead in this case. According to an image that we have received, its Maximus VI Extreme board will now include support for Intel Devil's Canyon Core i7-4790K through a BIOS update. The image details that the new update enhances compatibility for new Anniversary edition and Devil's Canyon CPU. Looks like another clear violation of Intel's instructions regarding its products by manufacturers is underway. This support for the Core i7-4790K by the Maximus VI Extreme has its plus points though. IF support for Devil's Canyon on 8 Series chipsets follows through, it will extend their longevity until Broadwell arrives early next year. This would delay consumer purchases of Z97 until they choose to upgrade to Broadwell and give them support for all the features 4th generation K series has to offer on their current Z87 boards. Whatever the benefits or the drawbacks, until now it seems that we might be in for another interesting spectacle of events surrounding Intel and Manufacturers and violations. So stay tuned folks!