Now that Intel's Haswell Refresh and Devils Canyon are out its time once again for another iteration of an all out round between Intel and AMD processors in terms of Gaming Performance. Basically these aggregated benchmarks are all about which CPU is the best for gaming. The benchmarks were provided to us by udteam.tistory.

Intel Vs AMD Benchmarks - What is The Best Gaming CPU Money can Buy?

The Intel CPUs used in this test are Haswell Refresh, Devil's Canyon and even Ivy Bridge-E (since Haswell-E isn't out yet), i.e. the latest generation of Intel available on the market today. From the AMD side of things, the Vishera, Kaveri, Richland and Kabini families were used. The test bench specifications are as follows:

For the benchmarks, multiple games including but not limited to the Crysis Series, Metro, Tomb Raider and Batman Arkham were used as well as synthetic benchmarks such as 3D Mark11 and 3D Mark 2013. The results were then aggregated into one relative price-performance graph. All processors are operating on stock clocks with no overclocking or overvolting. Finally without any further ado here is the aggregated benchmark: 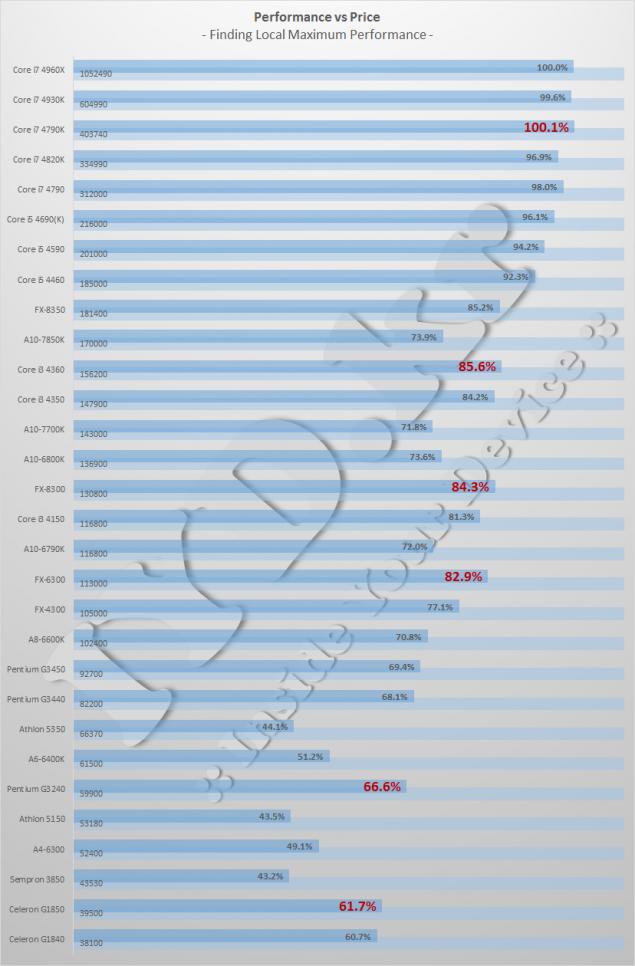 Not surprisingly the Devil's Canyon flagship Core i7-4790K takes the performance/price crown. This is because games cant really utilize the increasing cores and threads that Ivy Bridge-E has to offer and it comes down to a clock for clock basis and the 4790K with its higher clocks can keep up with the Ivy Bridge-E series while remaining out of its price class. The results are this:

Ofcourse, this benchmark is only considering the latest generation of Intel's Processors. I imagine if you were to bring in ol' Ivy and Sandy to play the benchmarks would get much more interesting. The fact of the matter is that for most Non - SLI / Crossfire rigs, you don't need a lot of CPU Horsepower, especially since modern APIs are now targeting CPU overhead. The performance increase of CPUs per generation is relatively stagnant as compared to the energetic exponential increase seen in GPU technology so you will have to wait a couple of generations before classics such as the i5-2500k even begin to show signs of poor performance.