This just in. Ahead of all the NDA violation drama, it seems that manufacturers have decided to ignore the NDA signing and release their Intel Z97 boards anyways. Intel is notoriously famous for secrecy when it comes towards companies using its design to make their products. We have seen several breaches of NDA this time round, first when we leaked MSI's images of their boards based on the Z97. Blurred images were then provided by the manufacturer to the press. Then ASUS went one step ahead and officially decimated the NDA by releasing unedited pictures of its boards all over facebook. Well things have heated up it seems, and boards based on Intel's Z97 have officially appeared on the retailing website.

Z97 Models Appear on Newegg (US). Several Other Retailers Around the World Also Make Listings

As it can be seen in the screenshot above, Newegg.com has started to list offerings of Z97 boards. Some important mentions include MSI's flagship Z97 MPOWER Max AC which costs around $259, ASUS' TUF Sabertooth Z97 at $249 and Gigabyte's mid price range model at $149. This however is not the only listing of the boards.

Now ofcourse it could be a surprise, early NDA lift. Since so many retailers are now posting these motherboards ready to ship it would make little sense otherwise. I would be genuinely surprised if all the AIBs have done this without Intel's consensus. Because NDA be damned forever if Intel does not know about this. The listings are popping up all over the world as we speak, this is quite possibly the first of its kind, early NDA lift.

MSI and Gigabyte had both made statements that they will not be following in ASUS's footsteps and stick to the original release date of 11th May but then what exactly has happened? Have they changed their minds or have they convinced Intel to let them free ahead of schedule and counter any marketing head start ASUS gained? One thing is for sure, a very big game was played tonight and we will know the details about it soon enough. And if this is indeed an early NDA lift, expect reviews flooding in any second now. Also, here are the other listings, amongst which the most notable one is the one made by Aria (UK). The listing has been taken down as of now but here's a cached image for your viewing:

Another European retailing site, Geizhals has made listing of similar models offered by the manufacturers. This is all being done before the official release date.

Finally, the US and EU are not the only ones who benefit from this updating of catalogs. Outlets in Taiwan (CoolPC) have also made listings of boards following the Z97. However the only boards listed there are the ones manufactured by ASUS and Gigabyte. Now Newegg is claiming the motherboards are 'ready to ship' but if someone placed an order right now, would they actually ship?

We have already done several round-ups of the latest Z97 motherboard lineups from various manufacturers which include ASUS, MSI, Gigabyte and ASRock. Each motherboard series has a distinct theme design and feature set of their own which offers gamers, overclockers and general users the best bang for buck for their budget ranges. 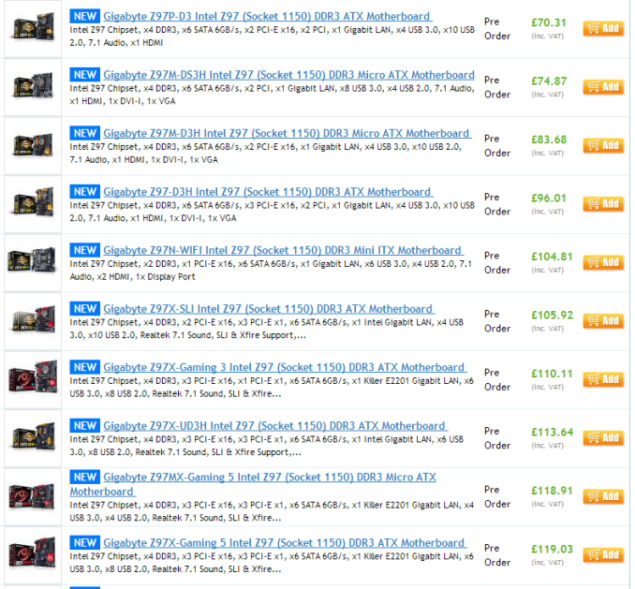 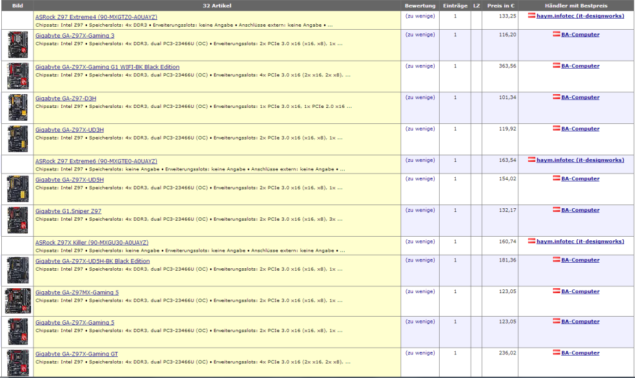