Intel's recently introduced 10nm Tiger Lake flagship, the Core i9-11900KB, is heading to the NUC 11 Extreme 'Beast Canyon'. The NUC 11 Extreme was pictured along with its Compute Element add-in card which is powered by the brand new Tiger Lake processor.

The NUC 11 Extreme was spotted over at KoolShare by HXL. The picture shows the 8 Liter chassis which comes with the brand new Compute Element. The Compute Element is an add-in card that houses the CPU, PCH, and VRMs and features an active cooling solution in a dual-slot form factor. It's very much like a standard graphics card expect it houses a CPU. The CPU is provided power in the form of a single 8-pin connector. 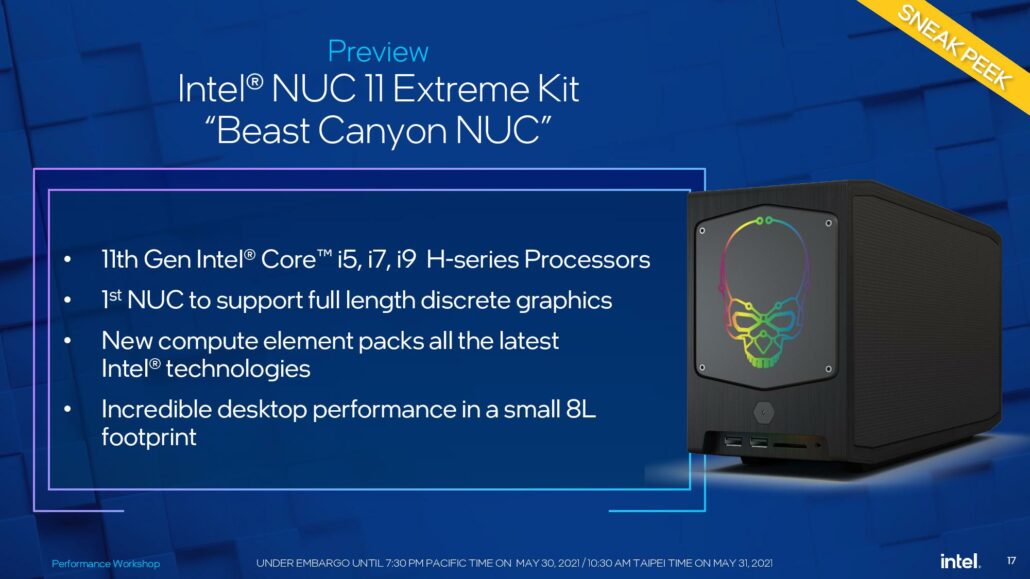 Intel has stated during its Computex 2021 presentation that the NUC 11 Extreme 'Beast Canyon' will feature 11th Gen Core i9, Core i7, and Core i5 H-series processors. However, it looks like the company also plans to launch its flagship NUCs with Tiger Lake KB series chips. This will also be Intel's first NUC to support full-length discrete graphics from AMD, NVIDIA, & also Intel's own Xe-HPG graphics cards when they launch later this year.

You can see in the picture that the NUC 11 Extreme 'Beast Canyon' has a full-length PCIe Gen 4.0 x16 slot with a dual-slot height for discrete graphics. There's also a PCIe 4.0 x4 slot for additional AICs. Other than that, we can see a right-angled 24-pin ATX connector on the motherboard. The specifications of Intel's Core i9-11900KB Tiger Lake 11th Gen CPU is mentioned below: