The first benchmarks of Intel's flagship Cascade Lake-X processor, the Core i9-10980XE have just been leaked. The processor which would feature the same core count as its predecessor, the Core i9-9980XE, seems to feature a good uplift in performance with faster clock speeds and also comes with aggressive prices.

We know that Intel is readying a new 10th Generation X-series lineup which would feature their Cascade Lake-X processors. The lineup leaked out yesterday, featuring the 10 core Core i9-10900X, 12 core Core i9-10920X, 14 core Core i9-10940X, and 18 core Core i9-10980XE SKUs. There might be more variants during the final launch but these are the ones that were unveiled in the leak.

Yesterday, we got to see the benchmarks of the 10 core, Core i9-10900X. Today, we are getting the first benchmarks of the flagship Core i9-10980XE from Momomo_Us. The Intel Core i9-10980XE has 18 cores and 36 threads which seem to feature a boost clock of up to 4.70 GHz. The frequencies on Geekbench aren't reported correctly but the processor does come with 24.75 MB of L3 cache (24.8 MB as rounded by Geekbench) and 18 MB of L2 cache. The processor was tested on an X299 board which confirms that socket compatibility will be retained for the third generation of X-series CPUs. 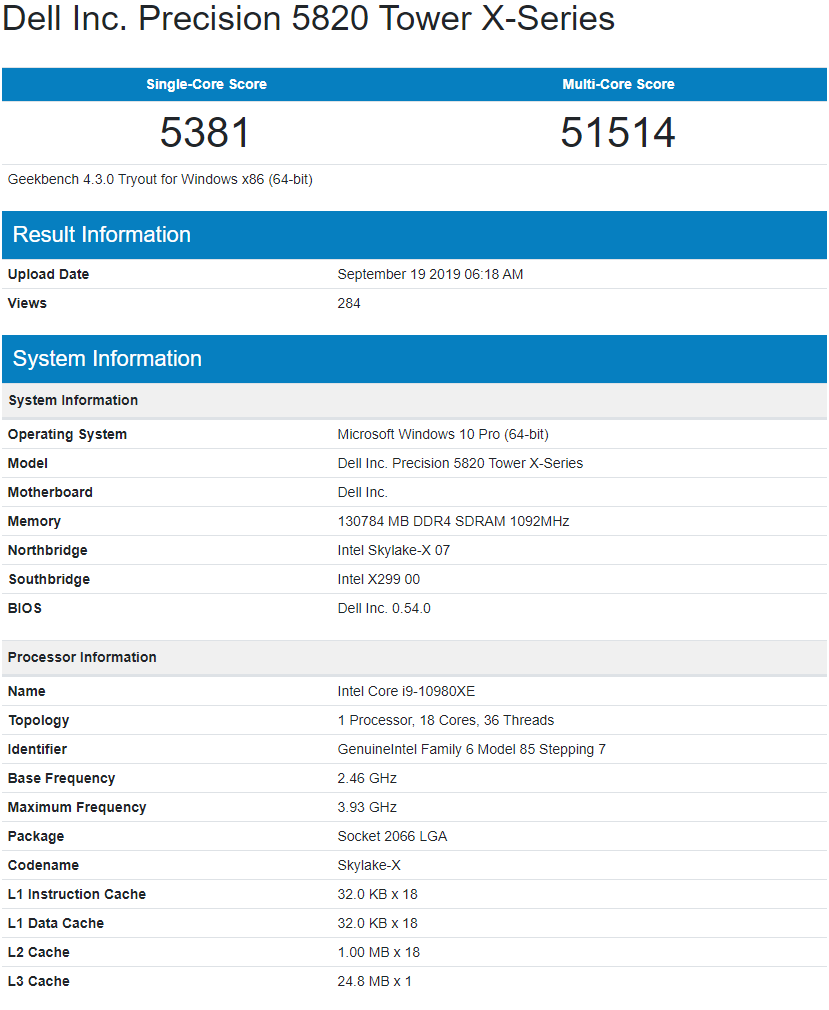 In terms of performance, the chip score 5381 points in single-core and 51514 points in multi-core tests. This is a respectable score considering the chip performance significantly better than not only its predecessor, the Core i9-7980XE but also the 16 core AMD Ryzen Threadripper 2950X. In benchmark results compiled by HotHardware, we can see a better image of the performance but do note one thing that certain Geekbench versions aren't fully optimized for higher-core count parts and as such, we see the Ryzen Threadripper 2990WX and 2970WX even below the 1950X.

These scores also align with what we have seen before for the 18 core and 10 core parts which leaked a while ago but without their proper name identifier. At Computex 2019, we saw various new and refreshed LGA 2066 socketed motherboards that had been designed to accommodate the upcoming Core-X processors. These motherboards had aggressive power delivery systems and more cooling heatsinks than the current ones suggesting that Intel will definitely be turning up the wattage on the high side to get those max clocks out of the Core-X line.

Now the one thing that remains to be seen is the prices of the new X-series parts. Intel has claimed a 2x performance per dollar increase over Skylake-X processors which if true should mean we can get the Core i9-10980XE around $1000 US range. Similarly, Intel is aggressively targeting AMD's 2nd Gen Ryzen Threadripper processors since 3rd Gen Threadripper CPUs haven't been launched yet.

With the combination of aggressive prices and performance that truly outclasses Threadripper line of processors, Intel might finally have a decent HEDT lineup in their hands. Intel announced that X-series (Cascade Lake-X) CPUs launch next month in October so we would definitely have more info on them prior to launch.