At their Architecture Day 2020, Intel also confirmed the launch of its upcoming Sapphire Rapids CPU platform in 2021. Sapphire Rapids will feature support for DDR5 memory and PCIe 5.0 and will truly be a "next-generation" data center chip with the addition of the CXL 1.1 interconnect. The company has also plans to release the OneAPI (going gold) later this year which should tie up their master plan of a unified datacenter ecosystem quite nicely.

While the company did not reveal the exact process Saphire Rapids is based on, we can infer that it will likely be based on the company's 10nm SuperFin Enhanced process because it succeeds Ice Lake processors (which are based on vanilla 10nm) and because it uses TME. Total Memory Encryption is an architectural design that encrypts the memory completely so even if someone dumps the RAM - they would just get garbage data. This feature is also present in Tiger Lake - which is based on 10nm SuperFin - which lends credence to Sapphire Rapids being based on the same (or more advanced) process as well. 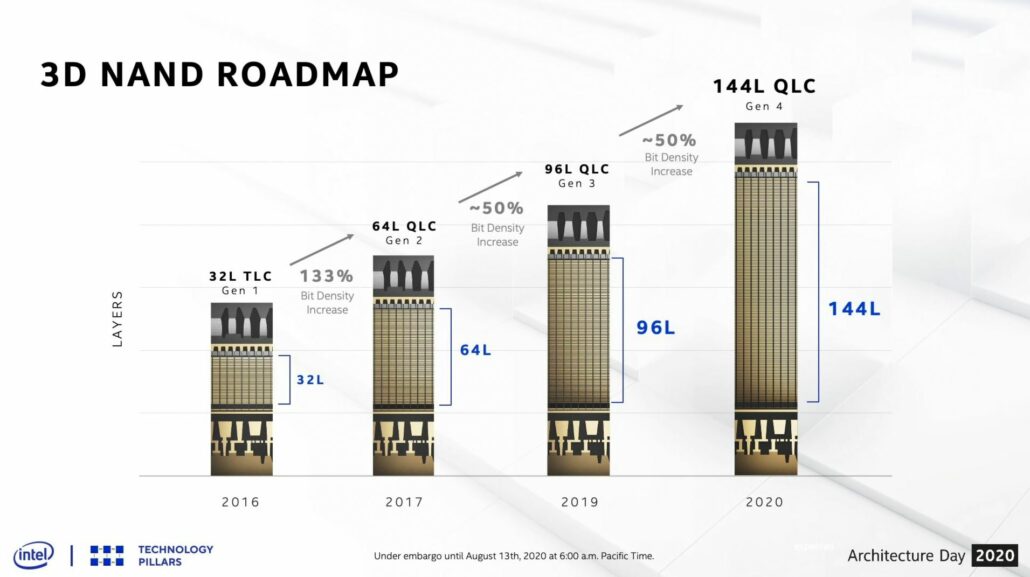 The company also confirmed that they will be shipping a new 144 layer QLC later in 2020 which should be higher than the industry average and offers a 50% density increase over the third generation QLC that Intel produced. This is something that once again ties in with their datacenter unification efforts. The entire platform would be competing against AMD's Zen 4 based EPYC Genoa lineup which would also be moving to a newer platform known as SP5.

AMD has promised new memory along with new capabilities for the Genoa lineup which would include support for DDR5, PCIe 5.0, and more. Intel plans to tackle AMD in two key departments with Sapphire Rapids, one being increased per core output (performance) and decreased TCO$ per core. With CXL and a complimentary Intel ecosystem in place, single-threaded performance alone is not enough to justify a transition to AMD parts - or at least that is what Intel is rationalizing.

The company also confirmed their Alder Lake lineup of CPUs featuring hybrid technology. These will feature Golden Cove cores with Gracemont and come out sometime in 2021 according to the roadmap. To put this into perspective, Golden Cove is the architecture that succeeds Willow Cove (the microarchitecture that Tiger Lake is based on) and should offer even higher IPC performance and clock speeds. The same goes for Gracemont cores which succeed the last generation of "monts".

Intel's Alder Lake will feature big and small cores and is Intel's ace to take over the mobility market. The small cores will allow the company to reduce standby power by as much as 91% allowing for a massive increase in battery life on notebooks and mobility devices while the high powered Golden Cove cores make sure that actual raw performance isn't compromised in any fashion.