Intel Broadwell Supports DDR4 Memory But Only On Server Platforms, Arriving To Consumers in Late 2014

Samsung and other major memory manufacturer's have already commenced mass production of the next generation DDR4 memory built on the 20nm process technology which aims to improve performance and       drop power consumption by 20-40 percent. 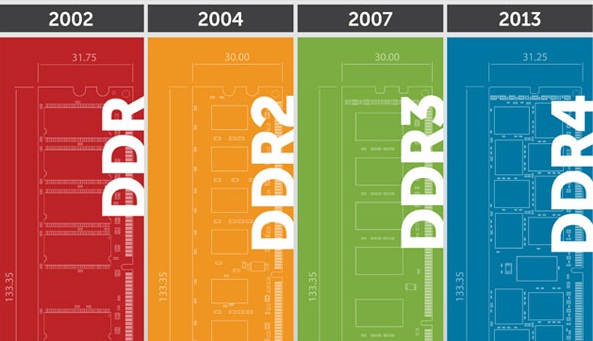 Intel Broadwell Supports DDR4 Memory But Only On Server Platforms

While these memory modules sound great, the chips that would actually support them aren't going to arrive that early and are currently slated for 2013 with the arrival of Intel's Broadwell chips and Xeon series processors. You already heard from us alot on the Intel Broadwell architecture which is a 14nm die shrink of Intel's Haswell CPUs and comes with minor improvements on the CPU side but major enhancements on power saving and graphics die which has been said to feature twice the performance of current GT2 graphics chips. Their are some rumors that are circulating the web that Broadwell-K series chips may feature GT3 Iris-Level graphics with embedded eDRAM of 128 MB but they hold no credibility and should be taken with a grain of salt. The statement may however be true for the mobile counterparts which Intel is primarily focusing towards.

Anyway, back to the DDR4 talk. According to ComputerWorld, Intel will be bringing DDR4 memory support to their 14nm Intel Broadwell chips. But this doesn't mean consumers but actually the server market which includes the Xeon processors would be getting support for the new memory modules while consumers would be restricted to DDR3 memory for a little over than a year before they get introduced to the new memory type with the arriva of new performance platforms like Intel Haswell-E in late 2014 and Intel Skylake in 2015.

"Broadwell, the first product on 14 [nanometer process], is up-and-running. Production is slated to begin in the first quarter of 2014, and Broadwell will launch in the second half of 2014,"

"The technology will be supported first on servers, while client users will have to wait for Intel's Skylake architecture for DDR4 support. Skylake is expected to bring support for DDR4, PCIe 4.0 and SATA Express."

"The only real customer [for DDR4] right now is Intel for use in next-generation system validation," Howard said in an email. "We are still 18 months away from client PCs with DDR4." ComputerWorld

G.Skill, ADATA and Crucial were among the first manufacturer's to show their DDR4 memory modules at Intel's IDF 2013 conference. It will still take some time for them to mass produce enough modules for shipment to server platforms by the second half of 2014. 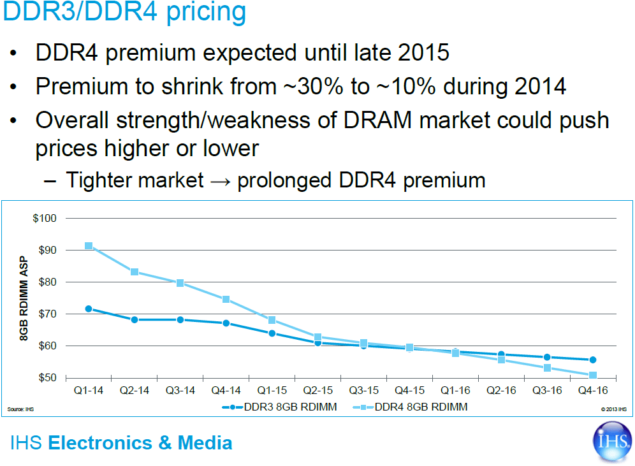 AMD on the other hand is planning to ship their first products with DDR4 memory support between 2014-2015. This is the same time when AMD launches their successor to Kaveri codenamed Carrizo which is already said to support DDR4 memory. The new Excavator architecture would also open the doors of DDR4 memory support in AMD's future Opteron processors. Its a pity that the AMD FX line isn't getting any new update next year (AMD surprise us?)