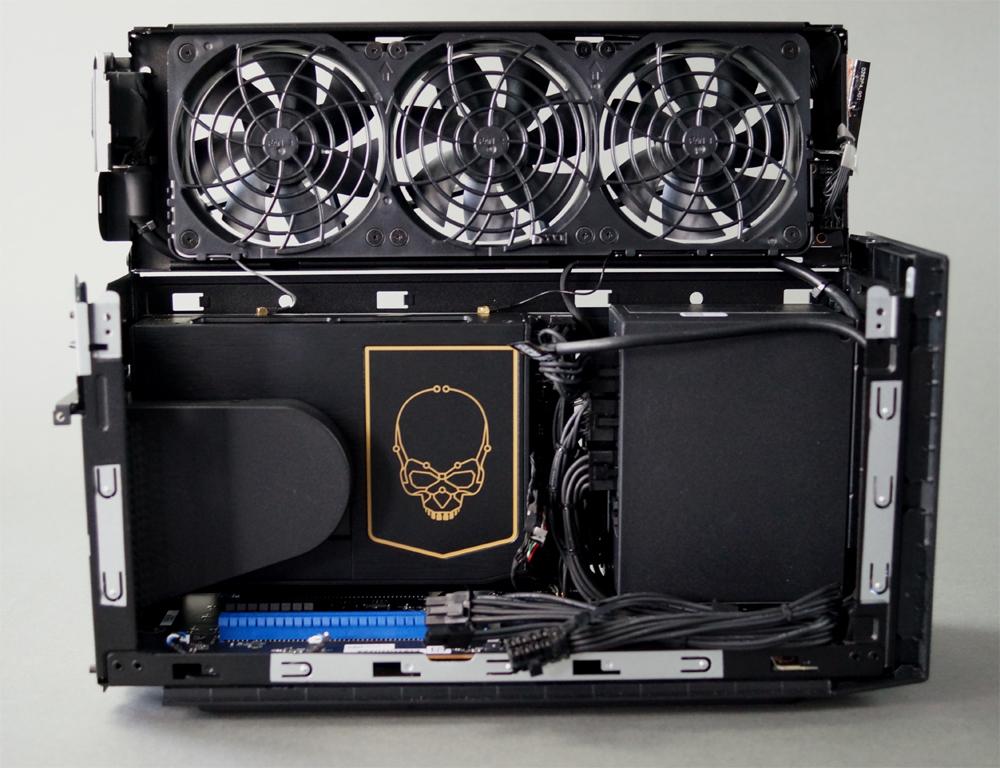 Intel's flagship Beast Canyon NUC 11 Extreme PC has been disassembled by MNPCTech, giving us a detailed view of what powers this insane SFF PC. The NUC 11 Extreme aims to be the fastest SFF PC within an 8L footprint and the way it is designed is nothing short of impressive so let's dive into the design and specs.

The Intel NUC 11 Extreme 'Beast Canyon' SFF PC comes within an 8L chassis which looks almost like a rectangle with huge mesh plates covering the sides and top of the case. The front features a large plate where the Intel 'SKULL' logo will be showcased with RGB LEDs. On the back is the traditional I/O and power inlet socket coming from the embedded PSU. The power supply itself is an FSP build 'FSP650-57SAB-A SFF' ITX 650W power supply.

'There are a good amount of ports on the NUC 11 Extreme which include:

Cooling is provided through three 92mm Cooler Master fans which blow air towards the NUC 11 Compute Element AIC. These fans and the mesh plate can be modified and are user-replaceable. As for graphics support, the Beast Canyon NUC 11 Extreme can house a dual-slot graphics card that is up to 12 inches in length. For additional cooling, Intel has placed an active cooling fan right below the Compute Element which covers a PCIe Gen 4 X4 slot. Right below the shroud for NUC 11's Compute Element are several expansion slots which include:

As the fastest Intel Tiger Lake B-Series offering, the Core i9-11900KB rocks 8 cores and 16 threads. It has a base clock of 3.30 GHz and a boost clock of up to 5.30 GHz (Velocity Boost). The CPU carries 24 MB of total cache and a TDP of 65W (PL1). The CPU features a BGA1787 package & pricing is not mentioned but will be based on the specific designs in which this chip features inside. One thing to notice is that the standard boost speeds are slightly slower compared to the Rocket Lake parts due to a more mature 14nm process node. The CPU is attached to the WM590 chipset which is purely designed for Tiger Lake embedded chips.

All 10nm Tiger Lake B-Series Desktop CPUs feature support for up to 128 GB DDR4-3200 memory and feature Iris Xe onboard graphics. You can pretty much expect all the modern features of Tiger Lake onboard these chips and we look forward to the designs that come up with these, especially the SFF stuff which will include next-gen NUCs. MNPCTech has promised to provide additional run downs on the Intel NUC 11 Beast Canyon SFF PC such as M.2 SSD, DDR4-3200 SODIMM & the GPU installation guide soon.