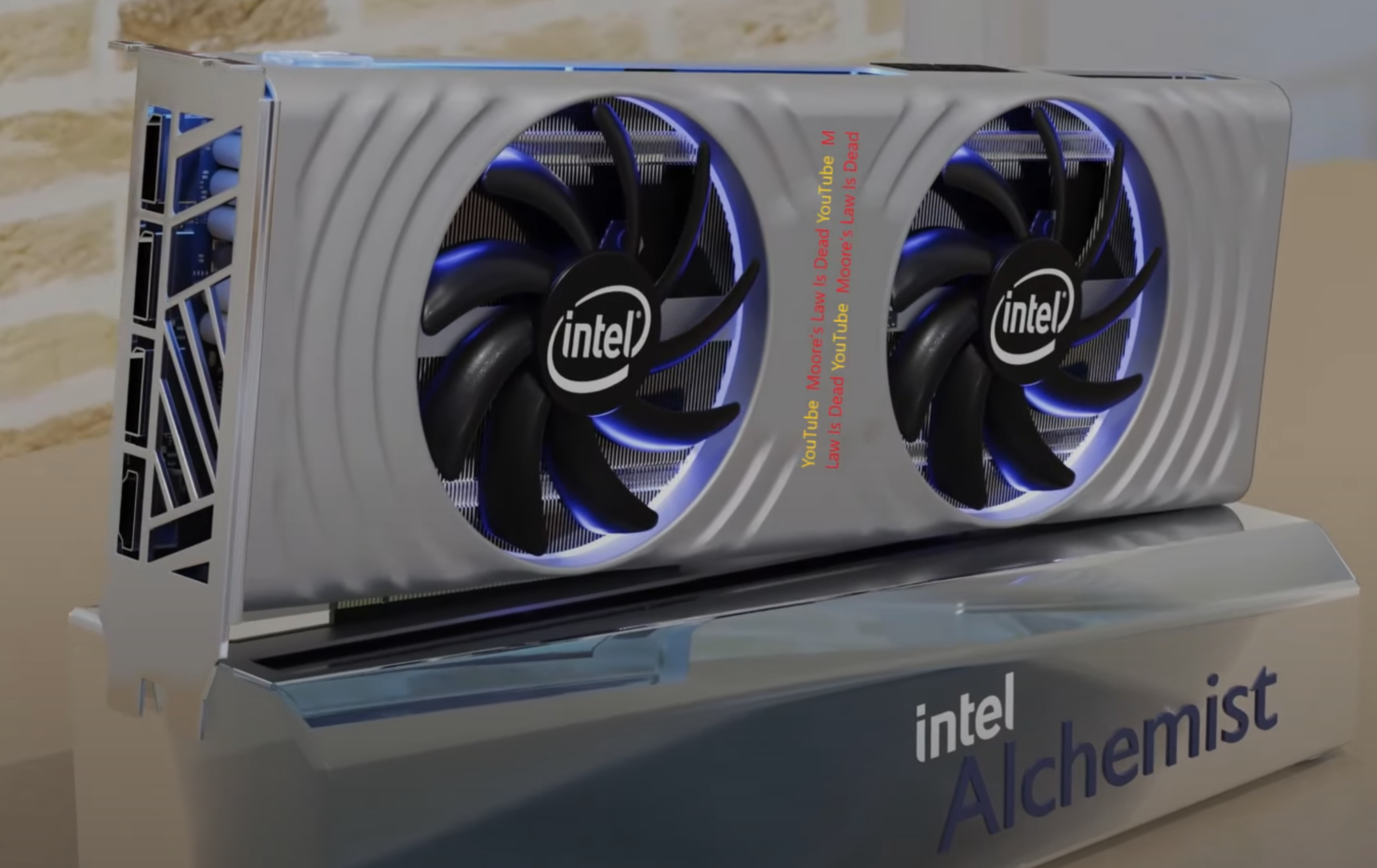 The first renders of Intel's ARC Alchemist reference graphics cards have been pictured in the latest leak by Moore's Law is Dead. The renders show us what Intel's own reference design will look like & a few tidbits regarding the launch of the desktop ARC lineup.

The Intel ARC Alchemist graphics card reference design for high-end variants has been pictured on several occasions before. We saw a prototype leak out by MLID back in April 2021 & Intel confirmed the design in its ARC marketing campaign in August. We also recently came to know how Intel plans to brand its upcoming gaming graphics card lineup, more on that here.

Moore's Law is Dead decided to ask his friend to render an animation of the reference graphics card based on the information he knows from his sources. The resultant render is very detailed and sheds light on almost every aspect of the reference graphics card, giving us a detailed look at what might be Intel's first and very own dedicated design for its first desktop discrete gaming card.

In the renders, we can see the card is based on a high-end ARC Alchemist GPU, probably the DG2-512 (Xe-HPG) chip which will power the upper echelon of Alchemist graphics cards. The card comes in a dual-slot and dual-fan design. Each fan incorporates a 9-blade fan design and there also seems to be RGB embedded around the fans giving a nice touch in blue. The cooler shroud has a circular patterning around the edges which gives a unique touch to the card. There's also the 'Intel' logo on the side accent plate that is made out of acrylic and also embeds RGB LEDs. The card rocks a large aluminum finned heatsink and MLID points out the possibility of a vapor chamber-based cooling solution under the hood.

Other than these, the card rocks a backplate that extends beyond the PCB. There are large vents on the backplate through which the second fan can vent air out. The card receives power through an 8+6 pin connector configuration while display outputs include a single HDMI and triple DP ports. In the renders, we can only see the outsides of the card so we might have to wait for a PCB render for later on. But despite that, Intel's reference and 1st Gen ARC Alchemist design looks great & credit to MLID and his friend for providing an early glimpse of the design, once again!

In a speculative measure of performance, MLID states that the TFLOPs make no sense for comparison as performance scales differently respective to the architecture, not the FLOPs performance. The gaming graphics card is pretty much expected to be faster than the RX 6700 XT & RTX 3070 at this point but with work ongoing on the driver suite, the performance is expected to improve further.

Also, it is stated that Intel's initial TDP target was 225-250W but that's been upped to around 275W now. We can expect a 300W variant with dual 8-pin connectors too if Intel wants to push its clocks even further. In either case, we can expect the final model to rock an 8+6 pin connector config. There're also talks about a custom lineup being worked upon by Intel's AIB partners. The first Intel ARC products are launching in Q1 2022.