Intel will soon be expanding its 11th Gen Tiger Lake portfolio of notebook CPUs with high-end 8 core offerings to tackle AMD's Cezanne lineup. The Intel Tiger Lake-H lineup would be split into two segments, the 35W parts which will be quad cores only while the 45W variants will feature more up to 8 cores.

The listings were spotted by Momomo_US and include three Intel Tiger Lake-H (45W) CPUs. All models are featured in Lenovo's upcoming Legion notebooks which will come in various CPU / graphics configurations. The main competitor for these laptops will be AMD's Ryzen 5000H CPU lineup codenamed Cezanne which launched a while back and offers up to 8 cores & 16 threads based on the Zen 3 core architecture. 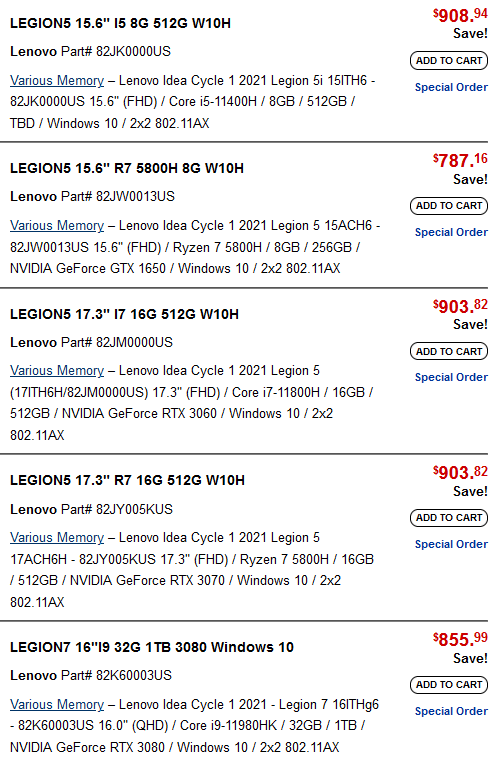 Starting with the top model, we have the Lenovo Legion 7 16" laptop which will feature the Intel Core i9-11980HK flagship. This CPU will come with 8 cores and 16 threads while its base and boost clock speeds are set at 2.6 GHz / 5.0 GHz, respectively. The configuration features 32 GB of DDR4 memory, 1 TB of storage, and an NVIDIA GeForce RTX 3080 graphics card.

This is followed by the Lenovo Legion 5 17.3" laptop which will feature the Core i7-11800H. The CPU will also feature 8 cores and 16 threads with clock speeds rated at 2.4 GHz base and 4.6 GHz boost. There's also the Core i9-11900H which will feature a similar core configuration but higher clocks of 2.5 GHz base and 4.9 GHz boost. The laptop is configured with 16 GB of DDR4 memory, 512 GB of storage, and NVIDIA's GeForce RTX 3060 graphics card. 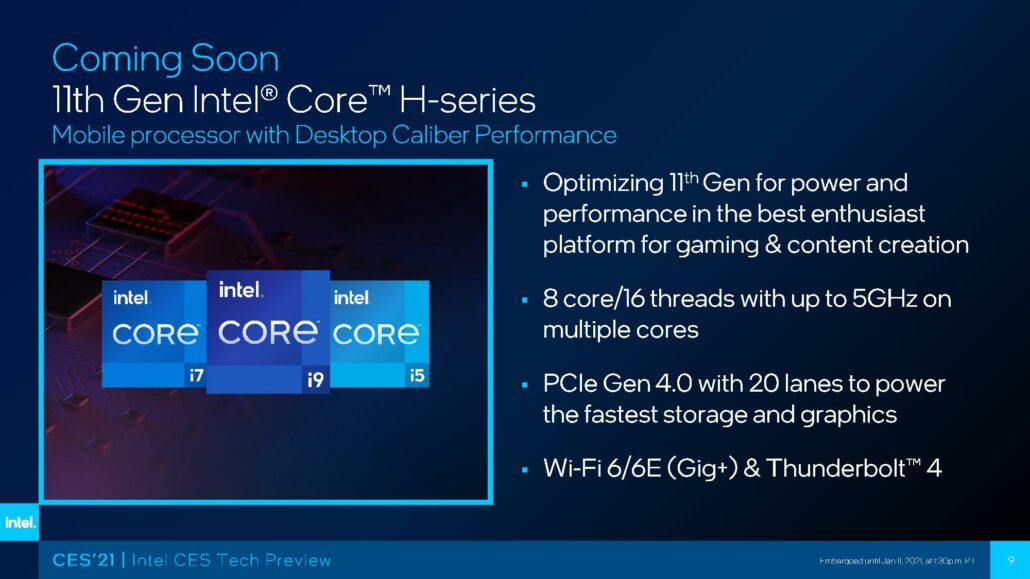 Lastly, we have the Lenovo Legion 5 15.6" with the Intel Core i5-11400H. This CPU will come with 6 cores and 12 threads. The clock speeds will be rated at 2.7 GHz base and 4.5 GHz boost while the laptop itself packs 8 GB of DDR4 memory, 512 GB storage, and the option to either select from an NVIDIA discrete graphics chip or Intel Iris Xe Max GPU. All four CPUs will feature a base TDP of 45W but will be configurable by OEMs while the higher-end HK variants will support overclocking. Their prices, however, as mentioned by the retailer, are not up to date and are just placeholders till we get close to the official launch which is set around late Q2 2021.

The high-performance 10nm Intel Tiger Lake-H lineup would consist of up to 8 core and 16 thread chips based on the new Willow Cove architecture. The CPUs would carry up to 34 MB of cache that's 24 MB L3 (3 MB L3 per core) and 10 MB L2 (1.25 MB per core). Tiger Lake CPUs will come with an asymmetrical 48/32 KB L1 cache and will fully support AVX2 & AVX-512 instructions. Tiger Lake-H CPUs would additionally feature Two-Level Memory (2LM) and SGX (Software Guard Extensions). Intel's Tiger Lake-H family would support DDR4 speeds up to 3200 MHz. There will also be up to 20 PCIe Gen 4.0 lanes on the Tiger Lake-H chips which will be a definite advantage over AMD's Ryzen notebook lineup.