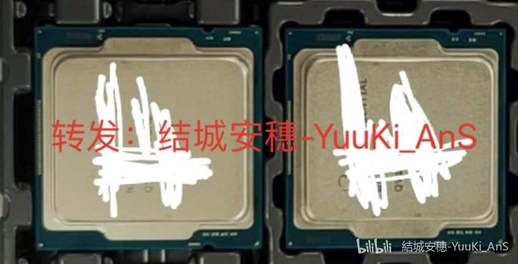 The first pictures of Intel's 11th Gen Rocket Lake Desktop CPUs have been leaked by YuuKi_Ans at Bilibili. The user who is known for leaking several engineering boards and CPUs before their launch has now given us the first look at Intel's next-gen successor to its 10th Gen Comet Lake family.

Update: Videocardz has also posted the first full shots of the 12th Gen Intel Alder Lake CPU. The chip features a rectangular design compared to the square shape which we will see up till Rocket Lake CPUs. The chip comes in a 37.5x45.0mm package versus the 37.5x37.5mm package that we get on existing processors. You can read more details on Alder Lake CPUs and their respective LGA 1700 platform here.

The pictures posted by the leaker show two chips sitting within a CPU tray. According to YuuKi, these are 11th Gen Core Desktop Processors which we know are officially codenamed as Rocket Lake. The 11th Gen Core family will replace the existing 10th Gen Core family and feature brand new cores based on the Cypress Cove core architecture and deliver some insanely fast clocks as per recent rumors.

Talking about the Intel Rocket Lake CPUs pictured in the leak, the two processors seem to feature a slightly different IHS compared to the 10th Generation Comet Lake CPUs. The socket is in the same position as these chips will be compatible with the LGA 1200 socket on both 400-series & also 500-series motherboards. The labels are covered since they can make it easy for Intel to track down the source of these samples and who the leaker got these chips through. However, the CPUs do come with the Intel Confidential marking so these are still ES (Engineering Sample) processors which may feature different specs than the final retail variants.

Our own sources at OEMs and board partners of Intel have told us that they have already received the first batch of ES Rocket Lake CPUs. They are currently testing them with various platforms and configurations which is standard routine for any new generation of processors.

What I've heard about Rocket Lake... It's gonna be hard times for Zen 3 related to gaming performance. 👀

To be honest, I am skeptical about it, we will see.

In addition to that, recent tweets by @CapFrameX have suggested that Intel is aiming for some seriously high clock speeds for its Rocket Lake lineup. It is said that current ES CPUs can hit turbo clocks of up to 5.6 GHz on a single core. Now, this is unverified at the moment but it looks like Intel could once again use their core clock advantage to tackle the competition in addition to using the newer Cypress Cove cores. Both of these features should allow Intel to gain back the single-core & gaming lead from AMD's upcoming Ryzen 5000 family which launches in two days.