With the launch of Intel's Ice Lake-SP Xeon CPUs approaching first, Inspur has revealed server racks that support the said Xeon CPUs along with up to 16 NVIDIA Ampere A100 HPC GPUs. This will put Intel on par with AMD who had landed the first and official design win for NVIDIA's DGX A100 server that utilizes EPYC Rome CPUs, taking full advantage of the PCIe Gen 4 protocol which Intel will introduce with its Ice Lake Xeon chips later this year.

While the official DGX A100 reference design uses EPYC Rome CPUs from AMD, various other OEMs will be designing their A100 servers around both, Intel's Xeon and AMD's EPYC platforms. Inspur, a manufacturer of data center and cloud computing servers has listed its upcoming AI servers which utilize NVIDIA's A100 Tensor Core GPUs.

All three servers feature the Intel Whitley platform with a dual-socket design to support two Intel Ice Lake-SP Xeon processors. All three servers are vastly different in terms of configurations. The top-end model is the NF5888M6 which focuses on extreme performance of up to 40 PetaOps. The server makes use of two Ice Lake-SP Xeon CPUs, 2 HGX A100 boards which feature 8 A100 Tensor core GPUs each making up for a total of 16 A100 accelerators. The server features 32 DIMM slots for DDR4 memory for up to 4 TB capacities. Storage options include eight 2.5" drive bays and 2 M.2 NVMe slots. The interconnect is handled by OCP 3.0 and eight 200GbE Infiniband slots. The total setup consumes 12 KW of power.

There's also the extreme scalability option known as the NF5688M6 which features the same Ice Lake-SP Xeon CPU configuration on a 2S Whitley platform but comes with a single HGX A100 board consisting of 8 Ampere A100 Tensor Core GPUs. The memory configuration is the same as and the storage NVMe options stick to two M.2 ports too. There are up to 16 2.5" drive bays on the system for expanded storage and a total of 10 200 GbE Infiniband slots. The system consumes 9KW of total power.

Lastly, we have the extreme optimization variant which consists of 2 Ice Lake-SP Xeon CPUs and a total of eight NVIDIA A100 accelerators in SXM4 form factor. This design isn't HGX compliant but is equipped with the same storage and memory specs as the Extreme performance variant. The inter-connect is provided through OCP 3.0 and four Infiniband 200 GbE slots. The model also consumes 9KW of power in total. 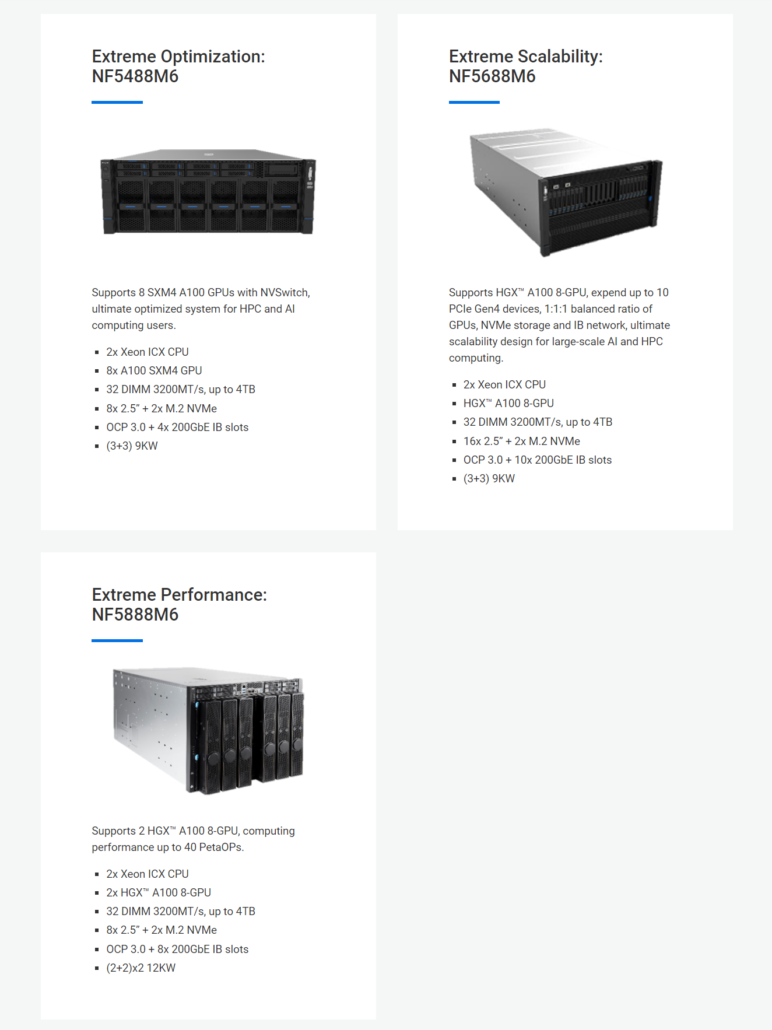 One of the key things to see here is that all three variants are PCIe Gen 4.0 compliant, something that is required to fully unlock the capabilities of the PCIe Gen 4 ready NVIDIA Ampere A100 GPU accelerators. NVIDIA already selected AMD considering they had PCIe Gen 4.0 support on its EPYC platform before any Intel server platform did. Inspur also offers a Cascade Lake-SP Refresh based server on the HGX platform but that is PCIe Gen 3.0 compliant.