Intel seems to be working hard on their next generation 10nm processors according to the latest leak. Their upcoming 10nm chips, including the much delayed Cannonlake and Ice Lake have been spotted in the 3DMark database along with their potential specifications.

According to the leak, we have details of at least three new mobile processors which are coming to different target markets. The first one we are going to talk about is Cannonlake-Y. The 10nm based Cannonlake-Y chip has no name at the moment, but it features dual cores and quad threads that are very basic for a Y-series chip that is meant to operate under 4.5W. The chip runs at a base clock of 1.10 GHz and will feature Gen 10 graphics. The chip was tested on a Cannonlake-Y test setup with LPDDR4 memory. This is probably the lowest frequency we have seen for a Cannonlake-Y chip as previous listings have showed dual core chips with up to 2.6 GHz clock speeds (2.2 GHz base clocks). 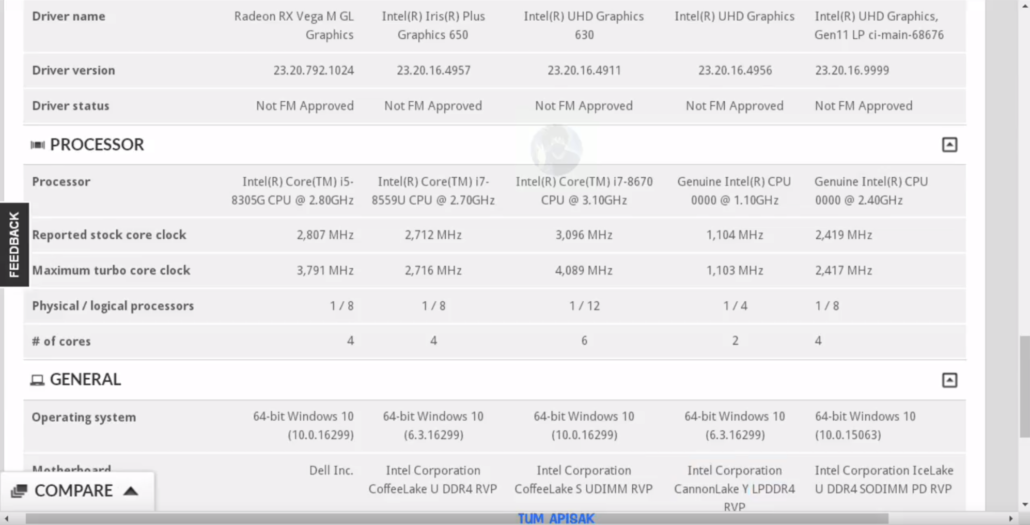 Next up, we have the unnamed Intel Ice Lake-U processor which features 4 cores and 8 threads. This chip comes with a base clock speed of 2.40 GHz and an unknown boost clock. This chip features the Gen 11 LP graphics processors and from previous reports, we can say that it may feature up to 48 execution units with a base clock of 600 MHz (twice that of current GT2 graphics chips). The chip was tested on an Intel Ice Lake-U test platform running DDR4 SODIMM memory.

The last processor that was listed is the 14nm Core i7-8559U which comes with four cores and 8 threads. This chip is clocked at a base frequency of 2.70 GHz and comes with the fastest iGPU to date from Intel, the Iris Plus Graphics 650 which features 48 execution units, up to 1100 MHz clock speed and 64 MB of embedded DRAM which acts as level 4 cache for the chip. The design is similar to Intel's 7th generation Kaby Lake-U series processors with Iris graphics, so we can expect similar 28W TDP designs.