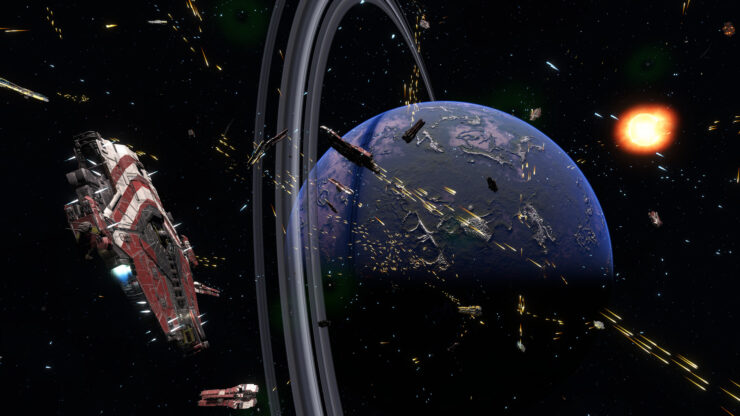 Infinity: Battlescape is one of those titles that seemingly have been in development forever. Some will recall the hugely impressive 2010 tech demo, after which the developers went dark for several years. Then, Infinity: Battlescape was funded via Kickstarter in late 2015 and now, at long last, the game will debut next week on Steam Early Access.

According to I-Novae Studios, the goal is to stay in early access for six months to a year. Check out the announcement trailer below.

Infinity: Battlescape is a multiplayer space-combat game taking place across a massive, true-to-scale procedurally generated star system that is 100% seamless (no loading screens). Multiple corporate factions are fighting for control of a solar system in a war involving hundreds of players, potentially more than a thousand per-server ( without instancing ), that can last from hours to days. Coordinate with other players to destroy enemy infrastructure around strategic locations, referred to as Battlescape's, across a wide range of gorgeous environments including barren moons, gas giants, volcanic planets, asteroid rings, and more.

Participate in space and planetary battles of massive proportions like those seen in movies such as Star Wars, Battlestar Galactica, and Serenity. It's not unusual in Battlescape to hop from battle to battle, some of them involving hundreds of ships. Climb the competitive ladder, gain ranks, and complete side missions to support the war effort in your own way.

Earn credits to upgrade and customize your ships, mount better weapons and equipment to give yourself an edge over your opponents.

Each faction owns a limited amount of infrastructure at each Battlescape, consisting of factories, land bases, large space stations, and small space stations. Large space stations can spawn all types of ship, making them critically important to defend, whereas small space stations and land bases are limited to smaller ships. Factories spawn AI-controlled haulers that transport resources to space stations. Those resources get converted into credits and redistributed on a regular basis to your team's players and AI commander. Players (or the AI) can then spend these credits on acquiring better ships and assembling a fleet to attack the enemy. Battles naturally emerge around the solar system at strategic locations.

Every ship in Infinity: Battlescape has its own strengths and weaknesses, supporting a wide variety of play-styles that each feel unique. An interceptor is small and nimble, good for scouting and protecting capital ships from hard-hitting bombers. Corvettes can be configured defensively, to repair team-mates, or offensively as "space tanks". Carriers are mobile spawn points with limited weaponry whereas cruisers are both heavily armored and heavily armed - capable of quickly dealing punishing amounts of damage to enemy capital ships and infrastructure.