After going all solar in the line of electricity, Australia has another solar electric surprise for us. It’s a limited edition sports car that’s under development in the country and it will be highly modified with an edgy look. You hear the word solar and everything dull comes to mind, but this solar electric car will change all that. At least that’s the thinking behind the concept.

The Immortus has got immense power and range

The concept car known as The Immortus is under development by an electric vehicle startup named EVX. The company is partnering with researchers from the Swinburne University of Technology in Melbourne and they are making their very best efforts to get this thing up and running. EVX made sure that the sports car has got significant power to keep it running and also to put it in the sports car category. It’s basically an electric vehicle at heart which feeds of the power socket in your home but it also has extensive solar paneling on the roof of the car which will give it the claimed ‘never ending’ power to stay on the road.

“The ability to run on the power of the Sun and store the energy for later use make it a car of practically infinite endurance,” boasts EVX’s website. “As long as the sun shines the Immortus lives…” 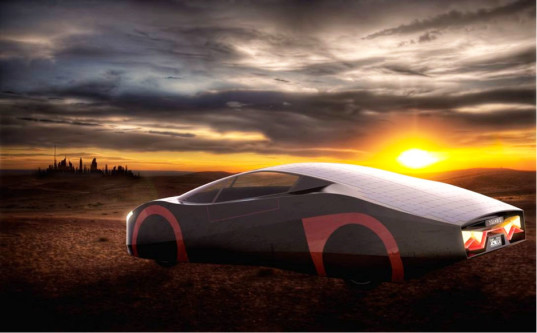 EVX worked quite cleverly by tying up with some of the top researchers in the country, from the Swinburne University, thus expanding their expertise in the area of solar research and helping them move one step closer to their ultimate goal of getting the Immortus on the road.

“Without government funding so far, we have made significant progress in our R&D and getting closer to turn our ambitious vision into a reality,” said Barry Nguyen, EVX co-founder and CEO, in a press release. “With the strong leadership of [engineering lead] Clint Steele, we have succeeded in keeping our approach lean through working with final year engineering students and new graduate engineers.”

The Immortus has got some really good specification too, including good battery range. EVX claims that you can get up to 550kms out of the battery at an average of 85km/h, that’s a little more than electric car rival company Tesla’s vehicles do. The company also claimed that the car will reach a speed of 100km/h from standstill in a matter of less than 7 seconds. According to EVX this concept car can run on solar power alone indefinitely, however that is still dependent on solar conditions of the area. This point is what intrigues me the most that dependence on fuel or electricity will become almost none if this car does come into existence and that would be really swell.

What the company calls “the complete independence that comes from never [needing] to refuel”.

The Immortus is still a concept, if that wasn’t clear before, but hopefully it will be out on the streets if everything goes as planned. A scaled down model of the customized solar sports car will be exhibited at SEMA 2015. SEMA is an autoshow scheduled to be held in Las Vegas this coming November and it exhibits specialty equipment of concept cars. Let’s see what people think of this car in November, we’ll keep you updated.