We can say that history is being made today, or at least it’s being attempted. Swiss businessman and pilot André Borschberg will be taking off in his Solar Impulse aircraft today in a daring attempt to make it around the world, that’s a staggering 35,000 kilometers, powered solely by the sun 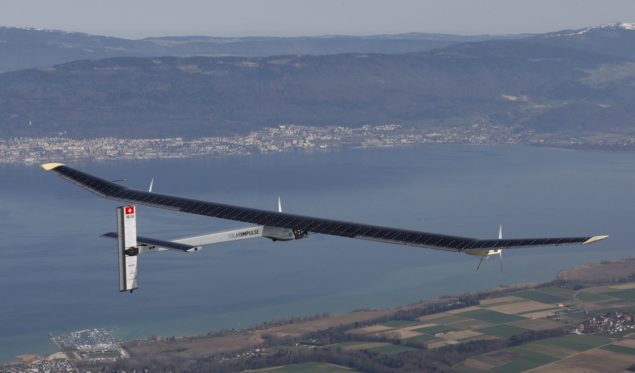 After a long struggle and many unsuccessful years, the endless years of planning a solar powered plane voyage have come to an end. The voyage will begin and end in Abu Dhabi. It will be split into 12 legs with each leg spanning into a total of 25 days of flight.

The journey won’t be a piece of cake for the pilots; they will end up spending about 250 hours in the cockpit of the plane. This won’t be a normal cockpit it won’t have oxygen or heating which will be needed due to the temperature changes that will range from -40 to 40 degree Celsius due to the difference in climate over the span of the globe. The single seats will act as both a bed and toilet by doubling, and to top it off the pilots will hardly have 20 minutes to nap every 2-4 hours so this explains why the flight will be split up into 25 days for each leg.

The plan is called Solar Impulse 2, it has a wingspan greater than that of a Boeing 747 and the whole wingspan is covered in more than 17.000 solar cells. These solar cells then provide power to the electric motors and also to four lithium batteries to power the plan through night time and any cloudy patches that come in the way. The plane has already broken the record as the first entirely solar powered plane to fly between continents, and if completes the journey it will become the first solar powered plane to fly around the globe. The plane has a constant speed of around 140km/h which is quite low considering aircrafts but at least it’s a positive step towards making renewable energy planes.

The plane is less likely to be commercially used in the near future, unless people decide that slow and uncomfortable air travel is what they prefer. But this concept voyage is not all about the speed as Chris Mills at Gizmodo explains:

“The craft is unlikely to be breaking speed records any time soon, but to the minds behind the project, Swiss aviators Bertrand Piccard and André Borschberg, that's not the point. For them it's the energy efficiency of the project that makes it exciting. They're not so concerned with changing the aviation industry just yet, so much as changing the public perception about how exciting renewable energy can be. In other words, this is as much publicity stunt as technological milestone."

I consider this a positive step towards a renewable energy automotive industry, it is likely that we will see more solar powered planes in the near future and let’s hope that someone comes up with a fster and more comfortable one.