Following the highly successful PC release of Monster Hunter World Iceborne, which already sold 4 million units across all platforms and propelled the base game to 15 million units sold, CAPCOM has now shared a detailed post-launch content update roadmap for the remainder of the year.

You can check out the official slide below, while the press release goes into much greater detail. For our review of the Iceborne expansion, head to this page. 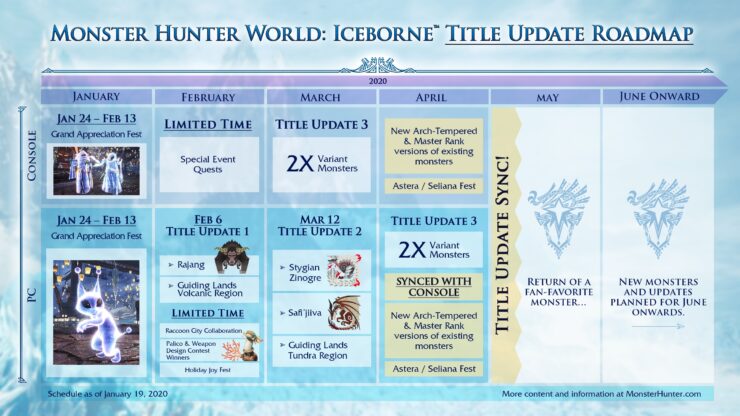 The centerpiece of the first PC title update on February 6 is the fearsome Rajang, the ruthless fan-favorite monster that offers a challenge for even the most seasoned hunters. A new Volcanic Region will be added to the end-game Guiding Lands, and becomes accessible once players have started the special assignment quest to battle Rajang. Popular survival horror icons Leon, Claire and Tyrant also pay a visit to Iceborne for the limited time Raccoon City collaboration, where hunters can acquire materials to craft Leon α+ and Claire α+ full armor sets plus three Raccoon City themed pendants to spruce up their favorite weapons. The first title update also brings the ability to visit other players’ rooms, and limited time quests that provide materials to forge the Hunter Weapon and Palico armor + weapon from the Iceborne Design Contest winners. Paid DLC options for room décor have also been added for those that wish to spruce up their place even more for guests.

On March 12, the second PC title update will star Stygian Zinogre, a more vicious subspecies of the electrifying fan-favorite Zinogre, that harnesses dragon elemental damage instead of lightning this time around. A new Tundra Region will expand the Guiding Lands further with a snowy landscape that’s home to bone-chilling monsters such as Barioth and Viper Tobi-Kadachi. As an added incentive, special materials exclusive to the Tundra Region can be used to further customize and upgrade weapons. Hardened PC hunters will also be able to attempt the challenging Safi’jiiva Siege to earn an arsenal of new Awakened weapons and craft powerful armor sets.

From February through March, console players receive new limited time event quests that increase the odds of encountering gold crown monsters, decorations, and Great Spiritvein Gems while maximizing their rank. A subsequent major title update brings two additional variant monsters to Iceborne, which will be available for console players in March and in April for PC. Later in April marks the beginning of major content updates for both PC and console being released on the same schedule. New Arch-Tempered and Master Rank versions of existing monsters will be available at the same time for both PC and console players, followed by the return of a fan-favorite monster in May. More synced updates and additional monsters will be available in June and beyond, with details coming at a later date.