Seems like the Ivy Bridge platform looks more promising as ever! With the latest benchmark slides that have surfaced, one can be sure to expect some noticeable improvements in the architecture over the to-be-superseded Sandy Bridge platform.

The hwbot member had himself this to say:

Although the selection of test items is not the most convincing, but it can also be seen Sandy Bridge and Ivy Bridge, when the frequency close to the performance gap. 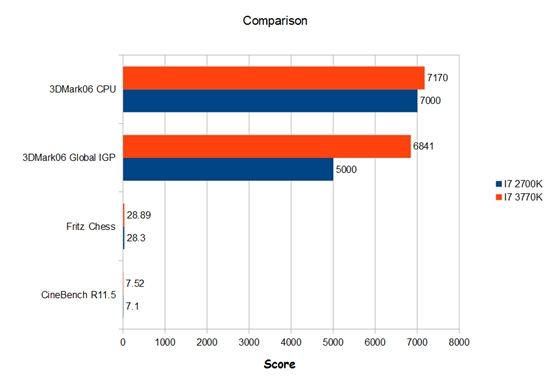 Seeing the slide above, that is indeed some improvement in terms of CPU performance.

As far as Intel’s policy goes, Ivy Bridge is Tick (more of as a Tick + as claimed by Intel officials) with showing there isn’t much gap with Sandy Bridge and having the average advantage of 3%. In terms of the IGP or integrated graphics on the CPU, there will be an increase of 35% in DirectX 9.0c, no further comment has been given over improvements in DX10 or 11.

Lastly, the Core i7-3770K his 20W more efficient relatively to the i7-2700K with the current Sandy chip having a TDP of 95W and the 3770K with 75W respectively. Hence, one can for sure have more advantages in terms of overclocking with the increased multiplier up to 63.

Do check the links below to know more on the upcoming Ivy Bridge Processors: