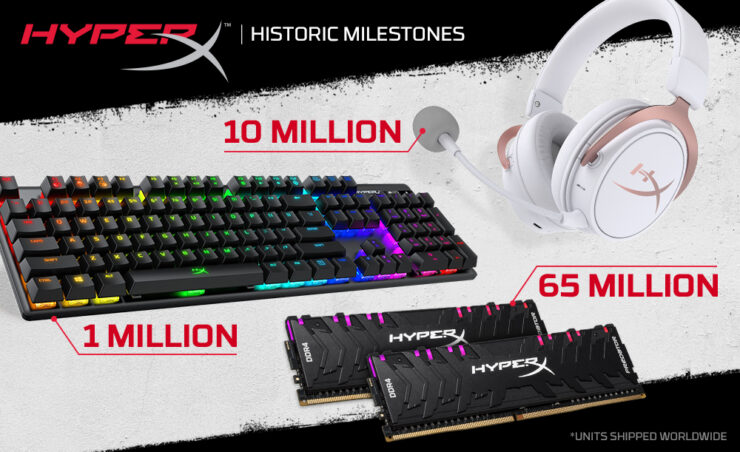 HyperX, the gaming division of Kingston Technology Company today announced it has sold over 10 million gaming headsets as it begins shipping its newest lifestyle headset, the Cloud MIX Rose Gold Edition. Since developing the first HyperX Cloud gaming headset in 2014, HyperX has produced 30 headset models, establishing itself as a leading PC and console gaming headset brand and moving into the lifestyle market with its Cloud MIX line of headsets. In addition, HyperX leads market share for PC compatible headsets according to the latest NPD data.

HyperX's Time to Shine in the Peripheral and Memory Industry

“Hyperx continues to exceed our expectations in market share, firmly established as both a leader in PC headsets and a pioneer in the gaming industry,” said Mark Leathem, general manager, HyperX. “Shipping over 10 million headsets is impressive enough, but given the keyboard and memory milestones, it shows what a powerhouse Hyperx has become in the gaming industry.”

As HyperX expands into the lifestyle market with its newest Cloud MIX Rose Gold Edition headset, it has developed a network of lifestyle brand ambassadors from a variety of backgrounds, including Grammy award winner Post Malone, JuJu Smith-Schuster of the Pittsburgh Steelers, Gordon Hayward of the Boston Celtics and a range of influencers and streamers. HyperX also recently launched its first apparel collaboration with Champion Athleticwear. HyperX is expanding from straight-up gaming to a lifestyle brand and it seems to be working.