Kingston and the Hyper X Predator family have a long-running history of uncompromising high performance. Their 2020 lineup of the Hyper X Predator DDR4 kits is no exception.  Aesthetically speaking not much has changed since this is more of a refresh than a new launch series and new XMP rated kits have been added running all the way up to DDR4 4800.

For this review, Hyper X sent over their Hyper X Predator DDR4 3600 CL17 32GB (2x16GB) kit. We will be testing it out on the X570 platform using the Ryzen 9 3900X CPU as the new lineup of Ryzen 3000 Series CPUs are handling high clock speeds so well, and we changed out our test bench.

The kit ditches the standard blister pack, but instead, quite the fancy box is accompanying the memory kit. The box is light on actual information for the memory kit with the front displaying the XMP rating as well as the capacity and DIMM count. The back of the box has a single sentence repeated in various languages with the model sticker displaying the capacity, XMP rating, and latency rating. Inside includes a case badge for those who like to use those kinds of things.

Sporting a thick black heatsink shroud with a two-toned aluminum finish for the heatsink with and brushed aluminum lettering and branding of the DIMMs. Sitting on top of the modules is the diffuser for the RGB modules that have the Hyper X logo printed onto it, so if you disable the lighting the module still looks attractive because sometimes you just have days where you want to disable the lights.

RGB is supported by their own Hyper X Ngenuity software as well as the more popular suites from vendors including; ASUS Aura Sync, ASRock's, Gigabyte's RGB Fusion 2.0, and MSI Mystic Light Sync. I found it integrates nicely with the ASUS Aura Sync on the ASUS TUF Gaming X570 tesh bench and the Hyper X Ngenuity software handled the RGB settings nicely on the EVGA Z370 motherboard as well. 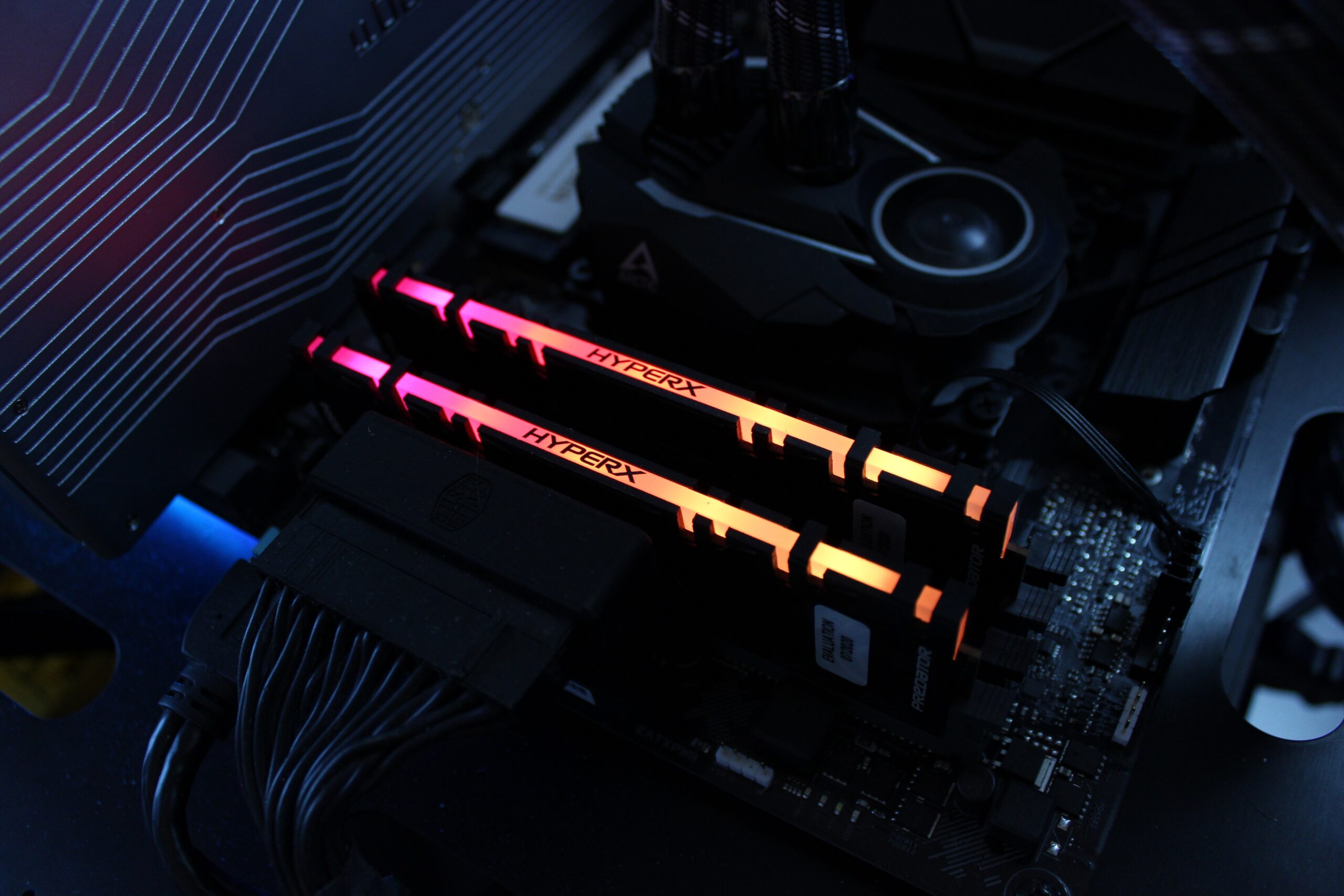 Our Memory test bench is based on the ASUS TUF Gaming X570 Pro-Plus and a Ryzen 9 3900X with a T-Force Cardea PCIe Gen 4.0 NVMe storage drive. Our tests are primarily synthetic tests based on real-world memory-intensive programs from Aida64 for measurements to compression/decompression workloads. One of the things we wanted to touch on with the Ryzen 3000 Series CPUs was to not just show dual CCD Ryzen 9 3900X performance but also show single CCD Ryzen 5 3600X performance as well. The biggest reason for this is that the single CDD processors will behave differently in the latency and write tests. So to 'simulate' this we disabled one fo the CCDs on the Ryzen 9 3900X and kept everything else the same, just something to note through the results

The Hyper X Predator kits are making use of the latest Micron J-die memory that was recently released. As of our last checking, you won't find these in the famous Ryzen DRAM Calculator as they're just that new. Compared to the Viper Black RGB's Samsung B-die modules it's clear that the Micron J-die is quite Ryzen friendly. 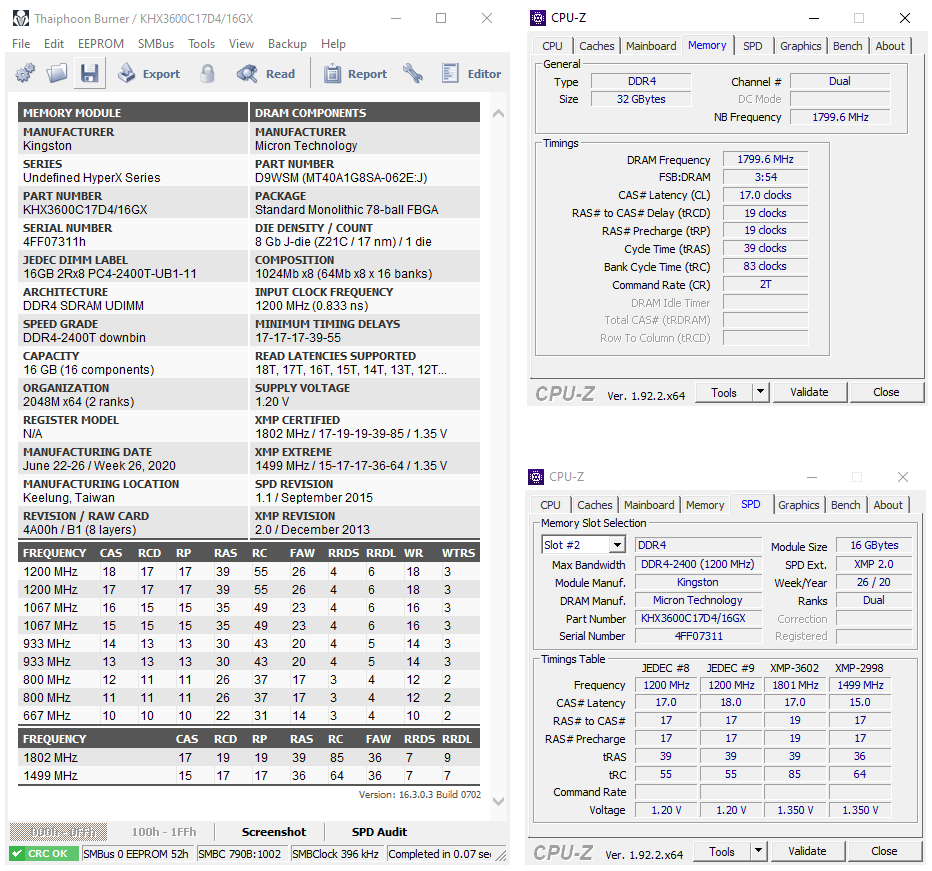 7-Zip is a very popular and free compression/decompression software tool that is used to zip and unzip files. We tested

Far Cry New Dawn is still a title that is known to put the hurt on the CPU so it should also share a very similar outcome.  While the performance delta is staggering, it's still a big enough gap for people to really consider faster memory when using these higher-performing CPUs. This was tested at 720p Low Preset paired with an RTX 2080 Ti, just a bit of info on the results is that they're entire CPU bound and this is allowing the impact of the memory speeds show their advantage.

At the end of it all Kingston's Hyper X Predator RGB DDR4 3600 32GB (2x16GB) kit is a pretty well-rounded kit of memory. It offers solid and comparable performance at it's XMP rated speeds but does fall a bit short if you have to run it at lower frequencies like DDR 3200. If that's the case just tighten up the timings to regain some of the performance lost and you'll be back in line with competing kits.

The aesthetics and lighting can easily be found complimentary of almost any build. The side profile is a bit garish but not overly done so it blends in well enough. If the RGB isn't your thing I would either tell you to turn it off or steer you into the direction of the Hyper X Predator Black lineup and go sans RGB altogether.

The pricing is a bit on the higher side, but the Predator lineup has never been known as the 'budget' option, if you want that I encourage you to look to the Fury lineup if Hyper X is where you want to land. But, more interestingly here is that I can't seem to find this particular kit available for sale anywhere at the time of wrapping up this review, I did find the lower 16GB (2x8GB) capacity DDR4 3600 on Amazon for a respectable $125.99 and the 32GB (2x16GB) DDR4 3200MHz for $180.33.

Gorgeous and fast memory that overclocks easily to the perfect sweet spot on Ryzen 3000, but it's not the most friendly on your wallet if you can find them in stock.