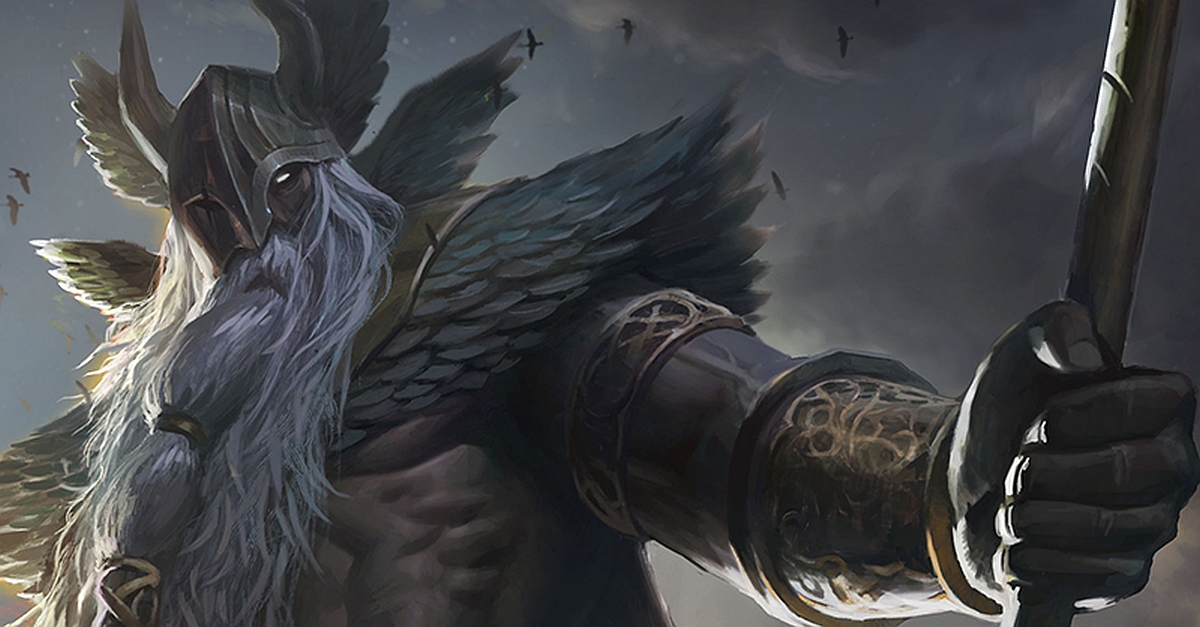 An artwork depicting Odin, The Allfather, in Rune: Ragnarok.

It's a great time to be a fan of Norse mythology, between the excellent Hellblade: Senua's Sacrifice, the upcoming God of War reboot and Rune: Ragnarok, announced recently by Human Head Studios.

A sandbox open world RPG set during the end of times in Norse mythology, we know very little else on Rune: Ragnarok other than there will be fighting, raiding, sailing and crafting, as fitting for this kind of game.

To try and breach the veil of shadows surrounding the game, we reached out to Human Head Studios and they've been kind enough to agree to an interview even at this early stage.

As a result, we talked with Project Director Chris Rhinehart. While the name might not ring a bell in your minds, Rhinehart has been in the industry for well over twenty years, starting as a programmer on games like Heretic and Hexen. In 1997 he was among the founders of Human Head Studios and then worked on the original Rune; since then, he is credited as Project Lead and Writer on 2006's Prey, as Designer on Bioshock Infinite and as Project Lead on the WiiU port of Batman: Arkham Origins.

It's been a long time since Rune. Why resume the franchise now?

Rune holds a very special place in our hearts here at Human Head. It was the first game we released back in 2000 and we've wanted to create a sequel for years. It's amazing how many fan letters and emails we receive asking if we'll ever create Rune 2!

Why now? The time was right where we had a team available to work on a new Rune. We found a partner willing to fund the project and give us the creative freedom to create something that is true to the original Rune but also modernizes the franchise.

Do you consider this to be a direct sequel or otherwise?

It's not a direct sequel in that it doesn't continue Ragnar's story from the original Rune. This new game is set a long time after the original during the end of days, Ragnarok.  If you're not familiar with the mythology, Ragnarok begins and a great war breaks out between humans, giants, and beasts. The Gods themselves fight and many of them die. At the end, the world is consumed by fire and reborn anew.

In Rune: Ragnarok, the world has not been reborn anew. The battle has raged on for seven years. Most people have perished.  You're one of the remaining humans, trying to survive and bring about an end to Ragnarok.

Will there be any characters, maps etc. from 2001's Rune?

Maps aren’t directly copied, but we are looking at what aspects of maps we can use as inspiration and possibly bring forward. Characters: There will definitely be interactions with the Gods. Which ones, exactly, will be revealed soon!

Which engine are you using for Rune: Ragnarok?  How long has the project been in development and how many developers are working on it?

We publicly talked about reviving Rune 2 in 2012, but we officially started development this year. We've had a lot of time to come up with ideas since the original Rune, though.

Ragnarok is a fairly common theme in Norse mythology fiction. Do you intend to add any particular twist to your game?

Yes, but if I revealed them now, they would cease to be twists. One twist we've already talked about: Ragnarok started but for some reason has not ended. It's frozen in place, metaphorically and literally. You're one of the last surviving humans. You must find a way to end Ragnarok.

Where does the game take place? Is it one of the nine Norse realms and if so, which one?

It takes place across realms that have merged when Ragnarok began. Most of the game takes place in Midgard.

You stated that the game will be a sandbox open world RPG. Can you disclose the main features?

Not yet, but soon! I can say that Brutal Melee Combat is a key pillar of the game....

Can you talk about the combat system you're crafting for Rune: Ragnarok? Will there be a lot of gore?

The combat system will be brutal and will have gore, certainly. True to the original Rune, you can lop off your enemy’s arm and beat them to death with it. More information about the combat system and controls will be revealed at a later date!

Do you already have an estimate on the length of the game? Will there be side quests/content?

We have goals, but I hesitate to speculate on how long the game will actually be at this point. We will share more about that as development continues.

Will Rune: Ragnarok be single player only?

We haven't revealed our plans for multiplayer yet, but suffice it to say that our fans are posting a lot of comments about how much they loved multiplayer in the original Rune. We read all those comments and are listening.

Which platforms are you targeting for the initial release? On PC, what's the likelihood of supporting Mac and/or Linux?

PC initially, but we certainly have Mac, Linux, and consoles in mind for the future.

Thank you for the opportunity for this interview. We're extremely grateful to our fans for their reception of Rune: Ragnarok. We've all been waiting a long time for a new Rune and we can't wait to show you more of what we're creating. If you're interested in following the game's development, visit the official website and sign up for our email list or check us out on Facebook.