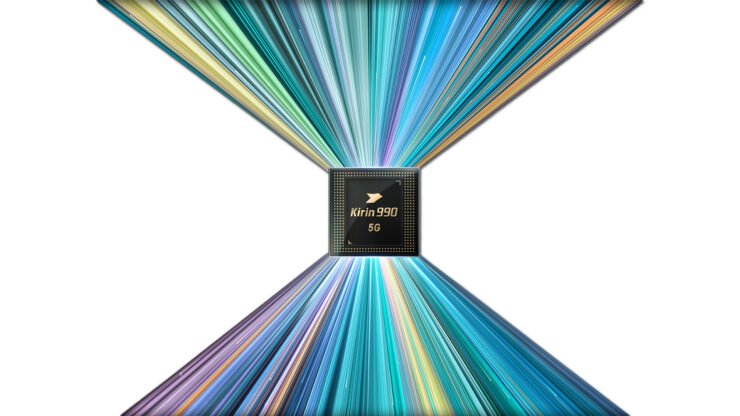 The Huawei Kirin 990 officially gets unveiled at the IFA 2019 trade show in Berlin. Though Samsung announced the world’s first mobile silicon with an integrated 5G which it calls the Exynos 980, Kirin 990 also sports an embedded 5G modem and here’s the best part. Since the Kirin 990 will be found in devices much earlier than the Exynos 980, technically, Huawei’s latest and greatest chipset holds the title of being the first SoC to feature an integrated 5G modem. 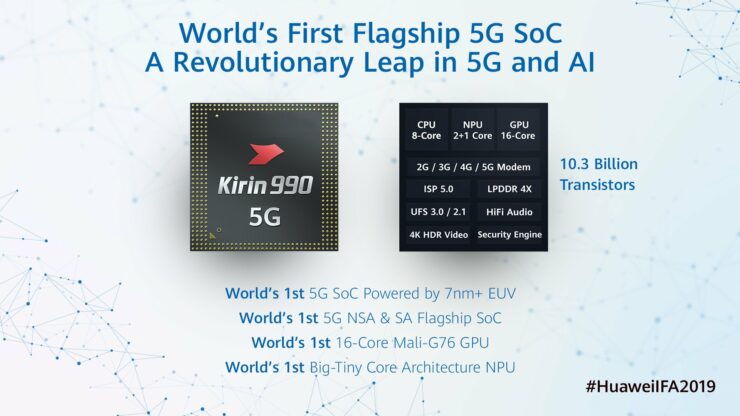 According to the press images, the company utilizes the 7nm+ EUV manufacturing process to deliver an upgraded GPU and CPU to perform above the threshold of the Kirin 980. The Chinese giant also states that when compared to the Snapdragon 855, the Huawei Kirin 990 can obtain 10 percent better single-core performance, 6 percent in GPU performance, and 20 percent in energy efficiency. The firm also claims that the new chip features a die size that’s 36 percent smaller than the Snapdragon 855 and it’s X50 5G modem. Another milestone for the technology giant is that the new SoC sports 10+ billion transistors.

Cellular speeds have also been given a massive upgrade, with the Kirin 990 being able to obtain a peak download speed of 2.30Gbps and a peak upload speed of 1.25Gbps. The company also incorporated an enhanced AI algorithm that ensures the best possible battery endurance. When compared to the Kirin 980 that’s connected to a 4G network, Huawei states the Kirin 990 offers the same efficiency. As for AI capabilities, Huawei claims that in just two years, it has managed to increase that performance by 12 times, which is impressive.

As for the CPU and GPU details, give below is the breakdown of what the Kirin 990 packs and supports.

It can connect with both NSA and SA networks while 5G evolves ?

HUAWEI Kirin 990 5G is the industry's best solution for NOW and for the future. #RethinkEvolution #HuaweiIFA2019 #IFA19 pic.twitter.com/SZOtWsOYX9

While we’ve mentioned it over and over that the Huawei Kirin 990 sports an integrated 5G modem, a 4G-ready version will be produced and will most likely be cheaper. There are some differences in the computing capabilities of the two versions which we’ll be updating you on, with the biggest one being that users won’t be able to able to connect to 5G networks.

Imaging and videography are two key areas where the company’s devices has shown its prowess time and time again. With the Huawei Kirin 990, things are expected to get even better. According to the press slides, the latest mobile silicon offers DSLR-level image noise reduction thanks to the BM3D or Block Match 3D filtering algorithm that enhances image quality and reduces unnecessary grain.

The Huawei Kirin 990 also supports camera sensors up to 64MP, and now officially supports 4K 60FPS encoding and decoding. As for which devices will feature the new silicon, the upcoming Mate 30 series will, which is expected later this year, as well as the new and improved Mate X. Huawei’s first range of flagships for 2020 will also be treated to the Kirin 990, so there are lots of things to be excited about.