HTC's smartphone division doesn't seem to be doing too good for the past few years. The company had its glory days back when Android was little more than a pet project. Today, the company struggles to keep up with the competition. Their devices are unable to compete with the likes of Samsung and OnePlus, and even Xiaomi. To make matters worse, their software upgrade schedule hasn't been particularly stellar either. Earlier this month, the HTC U 12 got it's Android Pie update and today, its the U11's turn. 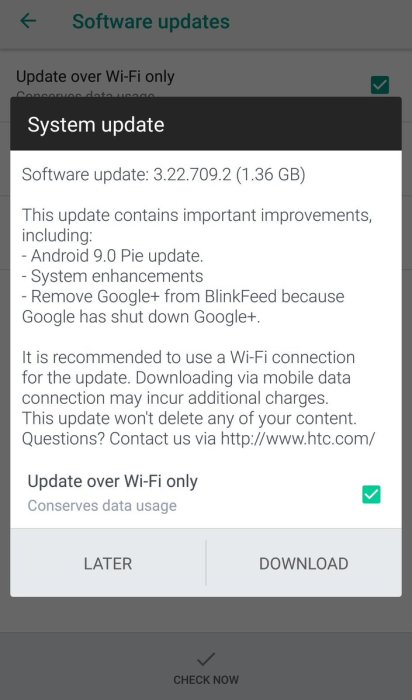 Earlier this month, HTC tweeted that its U11, U11+, and U12+ phones would be getting updated to Android 9 Pie this spring, beginning with the U11 before the end of May. Credit where it is due, HTC seems to be sticking to their schedule, something that a lot of OEMs take for granted very often. It is rather disappointing that we're still talking about Android Pie updates when Android Q is around the corner. Fragmentation has always been one of the biggest problems with Android and if things go the way they are, that isn't going away anytime soon.

The OTA update is heading out to devices in Taiwan at present. Although we would expect it to roll out in more regions in the coming weeks, it remains to be seen if that will actually happen. It's better than being on stuck on Oreo for sure. The update weighs in at a 1.36GB. The changelog states that it adds ‘System Enhancements’, it also removes Google+ from the HTC-made BlinkFeed. Additionally, it also brings Android Pie-specific improvements such as battery optimizations, optional gesture controls, and smarter notifications. It is very likely the last update the U11 will receive, considering its age.