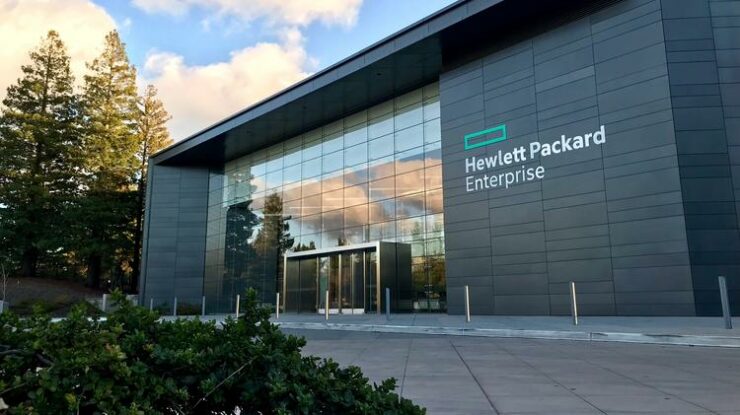 Overall the company reported earnings of $480 million on revenue of $7.22 billion. Revenue was down 9% from the same time last year, as analysts were expecting revenue of approximately $7.4 billion.  The most important of HPE's divisions, Hybrid IT, which is the company's sales unit for servers, storage and networking equipment, reported revenue of $5.67 billion, down 11% from a year ago and lower than what analysts forecasted of $5.74 billion. Within the Hybrid IT segment, compute revenue, which includes sales of servers and accounted for 45% of HPE’s total revenue, fell 13%.

Jury Sides with HP (NYSE: HPE) in Oracle (NYSE: ORCL) Lawsuit to the tune of $3bn

HPE also reported numbers for its full fiscal year fiscal numbers which were closer to Wall Street's expectations. The company reported $1.77-per-share profit on revenue of $29.1 billion while analysts were expecting earnings of $1.74 per share against revenue of $29.3 billion.

These softer than expected results close a tumultuous quarter for HPE. The company turned down a takeover deal by Xerox (NYSE:XRX) earlier in the quarter, that was brokered by billionaire Carl Icahn -- who is a shareholder of both companies -- but ultimately rejected by management for not being in the best interests of HPE. Xerox, however, didn't want to take No for an answer and threatened to bypass HPE management and go straight to shareholders and propose the deal to them.

This is also a time of transition for HPE as it attempts to shift from a model where it sells hardware and instead offers it as a service. HPE CEO Antonio Neri told CNBC that he no longer sees a traditional sales cycle -- particularly for larger deals -- as the cycle continues to stretch out. On a call with analysts, he stated that the company has set a goal of 2022 to transition to its service-oriented model.

“I am confident in our ability to drive sustainable, profitable growth as we continue to shift our portfolio to higher-value, software-defined solutions and execute our pivot to offering everything as a service by 2022,” Neri said. “Our strategy to deliver an edge-to-cloud platform-as-a-service is unmatched in the industry.”

Too Much Cloud to Go Around

The big question is if HPE will be able to convince its customers that Hardware as a Service is the future of enterprise computing.

As Neri reports a longer sales cycle is the new norm, it's going to be tough to move customers over to this model while still preserving profits. It might be that the cloud/enterprise market is oversupplied and has excess capacity: IDC reports that vendor revenue in the worldwide server market declined 11.6% year over year to just over $20.0 billion during the second quarter of 2019 (2Q19)while worldwide server shipments declined 9.3% year over year to just under 2.7 million units in 2Q19. IDC says that during this time key markets such a the US was down 19.1% while Latin America contracted 34.2%. China saw its 2Q19 vendor revenues decline 8.7% year over year.

Considering this oversupply, HPE shareholders should brace for a couple of tough quarters. Maybe its time to consider a buyout?