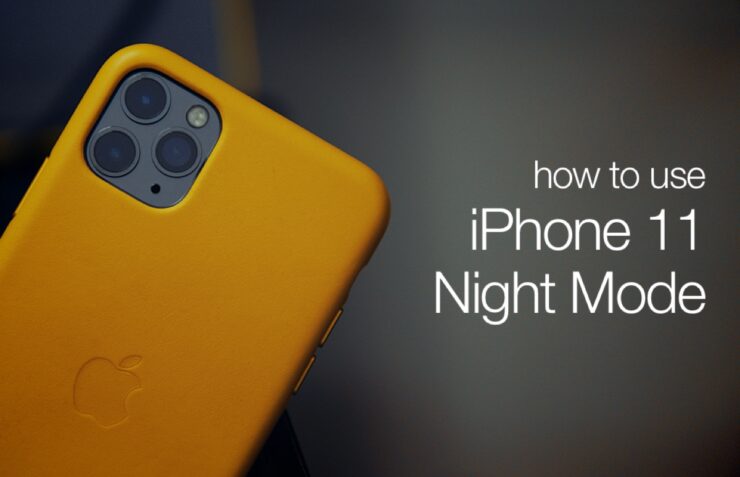 Use Night Mode in iPhone 11, iPhone 11 Pro to Make Your Photos Look Absolutely Stunning in Little to No Light

Every single smartphone out there bites the dust in the camera department as soon as the sun goes down. Thanks to computational photography and some other clever software based techniques, it seems as though this problem will become a thing of the past. And obviously, with sensors improving year over year, we can't forget this department either. But it's still mostly software that really adds the icing on the cake.

With the iPhone 11 and iPhone 11 Pro, Apple has introduced a brand new Night Mode. It works in a manner similar to how a full-blown camera would. It simply works by exposing the camera sensor to a particular scene for a prolonged period of time, allowing more light related data to be read, and in the end you are left with an image that looks as though was shot in proper lighting anyway.

Here's a sample image straight from Apple's website to give you an idea what you can expect once the feature kicks in:

On the iPhone 11 and iPhone 11 Pro, this is exactly how the new Night Mode feature works. But there are a couple of things which Apple has baked into its implementation that makes it stand out. Let's talk about those first then we will jump into how you can actually use the feature.

We're not making this up. There is no special option you need to enable in settings in order to jump into Night Mode. It kicks into action as soon as the camera notices that there is not much light around to take a bright enough shot. This is the sort of stuff we expect everyone to implement in the time to come. After all, smartphones are all about convenience.

Once the moon icon shows up in the top left hand corner, that is the indication that the feature has kicked into action. Remember, when it turns yellow, it means that your iPhone will shoot a long-exposure photo. If it's gray, you can tap on it to enable the feature manually, but it will only give you a very short exposure which doesn't quite help in improving things that much. Essentially, it's useless if it's grayed out. Wait for it to turn yellow instead and only then make necessary changes.

You Can Turn Night Mode Off, if You Like

Night Mode kicks into action on its own, but it's not really forced onto you. Even if the lighting conditions are bad, you can simply tap on the Night Mode button on the top left hand corner of the Camera app, which happens to be a little moon icon, and move the timer slider to Off. It's as simple as that.

Refer to the screenshot below if you need further clarification:

Note: The Night Mode feature does not work on the ultra wide-angle lens. It only works on the main wide camera, or the telephoto on the iPhone 11 Pro, Pro Max. The reason behind this is actually quite simple: the ultra-wide does not have image stabilization built in to keep the camera steady while snapping a low light photo, and it has a high aperture value, meaning it can't let too much light in for brighter shots.

Like I mentioned above, using the feature is super duper easy. Just wait for the moon icon to turn yellow, this is an indication that the iPhone is ready to take some banger shots. Right above the shutter button you'll see a timer in seconds, that's the amount of time you have to keep your phone steady so that the iPhone captures a night shot. Remember, the steadier the camera, the better the shot. Also, you can tap on the timer manually and expose the camera sensor even more to get a brighter shot. This in turn means you have to use steadier hands for an extended period of time in order to save a sharper image.

Lastly, there's an interesting feature built into the iPhone if you really, really want to take night photos to a whole new level. Since the phone has a built-in accelerometer and gyroscope, it uses the sensors onboard to detect how much exposure to give, based on motion - steadier the hand, a longer exposure value will be offered. Basically, if you place the iPhone on a static surface, or mount it on top of a tripod, you can shoot an image with exposures higher than 30 seconds. This is crazy, and is perfect for shooting the night sky, mountains, and whatnot.

Keep one thing in mind: low light images will always look somewhat bad no matter what you do. Noise will be removed as much as possible using the built-in software, but don't except to print massive posters using these shots, until or unless you are planning on using a tripod to take the images in the first place.

Last but not the least, here's a cool a little tip - you can use the ultra long exposures to create light paintings too. Place your iPhone on a still place, like a slab of concrete, or a tripod, pull the exposure dial all the way to the maximum seconds value, press the shutter button and draw something with a flashlight in the air.