How to Use Ambient Sounds on HomePod to Relax

Here's how you can use the new Ambient Sounds feature on HomePod to play sounds of ocean waves, rain and more in order to relax.

The HomePod is slowly and gradually learning new tricks with software updates, bringing to the table a bunch of useful additions such as multi-user support, Handoff as well as Ambient Sounds. The latter is an interesting inclusion to the software of the smart speaker as it allows you to play different sounds in the background in order to relax. It's a very therapeutic experience and can actually help you end your day or even focus on work in the most soothing way possible.

Note: This feature is limited to the latest HomePod firmware only.

Before we show you how you can play Ambient Sounds on HomePod, it's a wonderful idea to know what sort of sounds are actually available to the user. It turns out, there are seven of them in total, ranging from regular white noise to the beautiful sounds of the forest. Apple even threw in fireplace sounds into the mix too for those epic Christmas feels in the winter. Here's the complete list:

Use Your Voice to Play Any Sound You Like

Touch and hold the top of your HomePod to invoke Siri, or just say 'Hey Siri,' and then say 'Play White Noise using Ambient Sounds.' Of course, you can replace 'White Noise' with anything else in the list and HomePod will start streaming immediately. If you want to stop the sound at any time, simply touch the touch of your HomePod, or say 'Hey Siri, stop.' 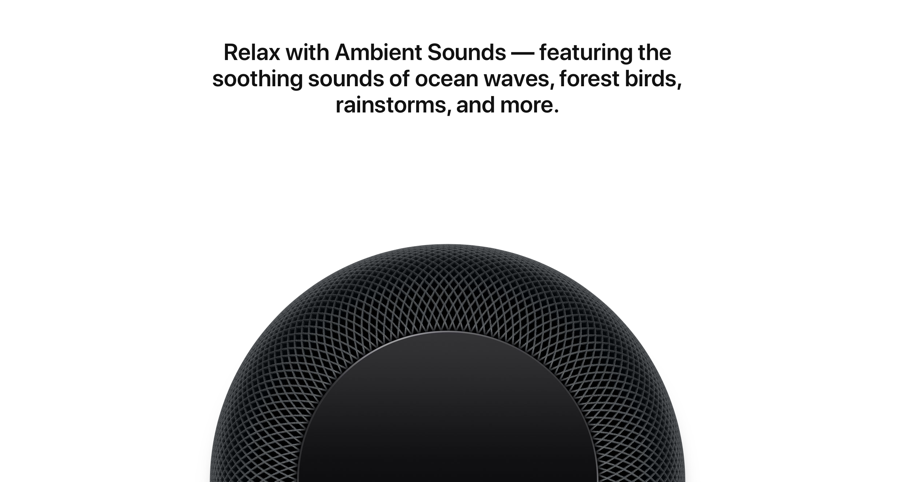 If you don't say anything to Siri after playing any one of the ambient sound presets then HomePod will keep on playing it for an indefinite period of time. Not the brightest of ideas, unless you really want to chill down or focus on something, and these sounds are the only thing that can help you. But, if you want to play the sounds for a limited period of time, then you can simply play the ambient sound followed by 'Hey Siri, set a sleep timer for 15 minutes.' What this will do is turn off the ambient sound after exactly 15 minutes.

I'm going to make something very clear at this point. Although this guide is specific to the HomePod, but even if you have a Google Home, you'll be pleased to learn that you can also play white noise or background ambient sounds too. Just say 'OK Google, help me relax' or 'OK Google, play fireplace sounds' and so on. Just like HomePod, Google has you covered with the Assistant too.