How To Recruit The Best Operatives In Watch Dogs Legion 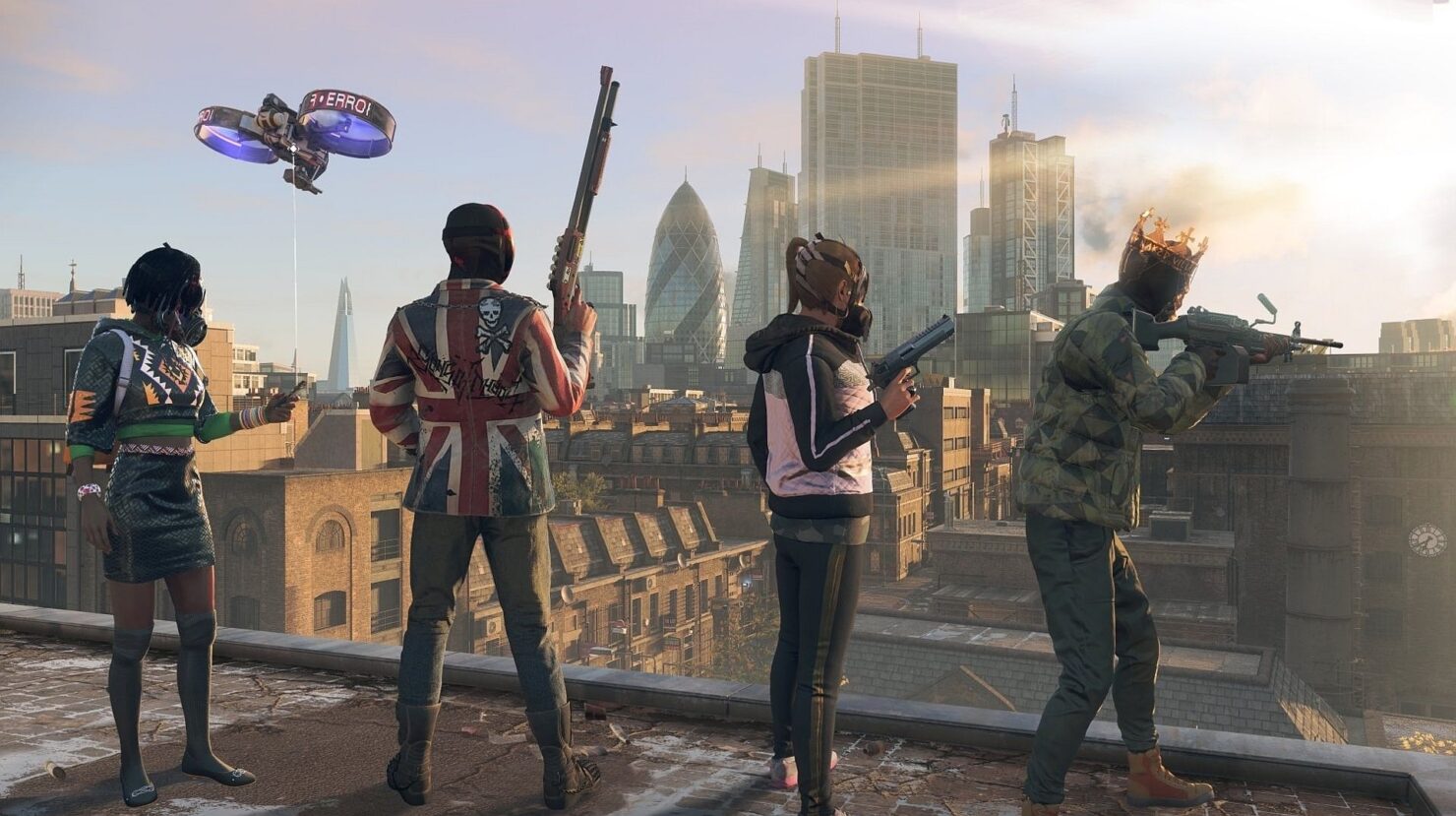 At the beginning of Watch Dogs Legion, DedSec, the hacktivist collective dedicated to counter-terrorism, apparently, goes through something of a restructuring. With fewer members but no less to do, you’ll have to start the recruitment process up again to fill out the ranks, and more importantly, the skills of the group.

Most of us have only ever experienced a job interview from the terrifying ‘please-hire-me’ side, but in Watch Dogs Legion, you’ll be headhunting the right candidate for the job from all over London. Which, in a city of about 9 million people, can be a little daunting. So if you need help playing a sort of reverse Alan Sugar in the Apprentice, look no further than this handy guide (after having taken a look at our beginner's tips and tricks guide, of course).

Why Should We Hire You? 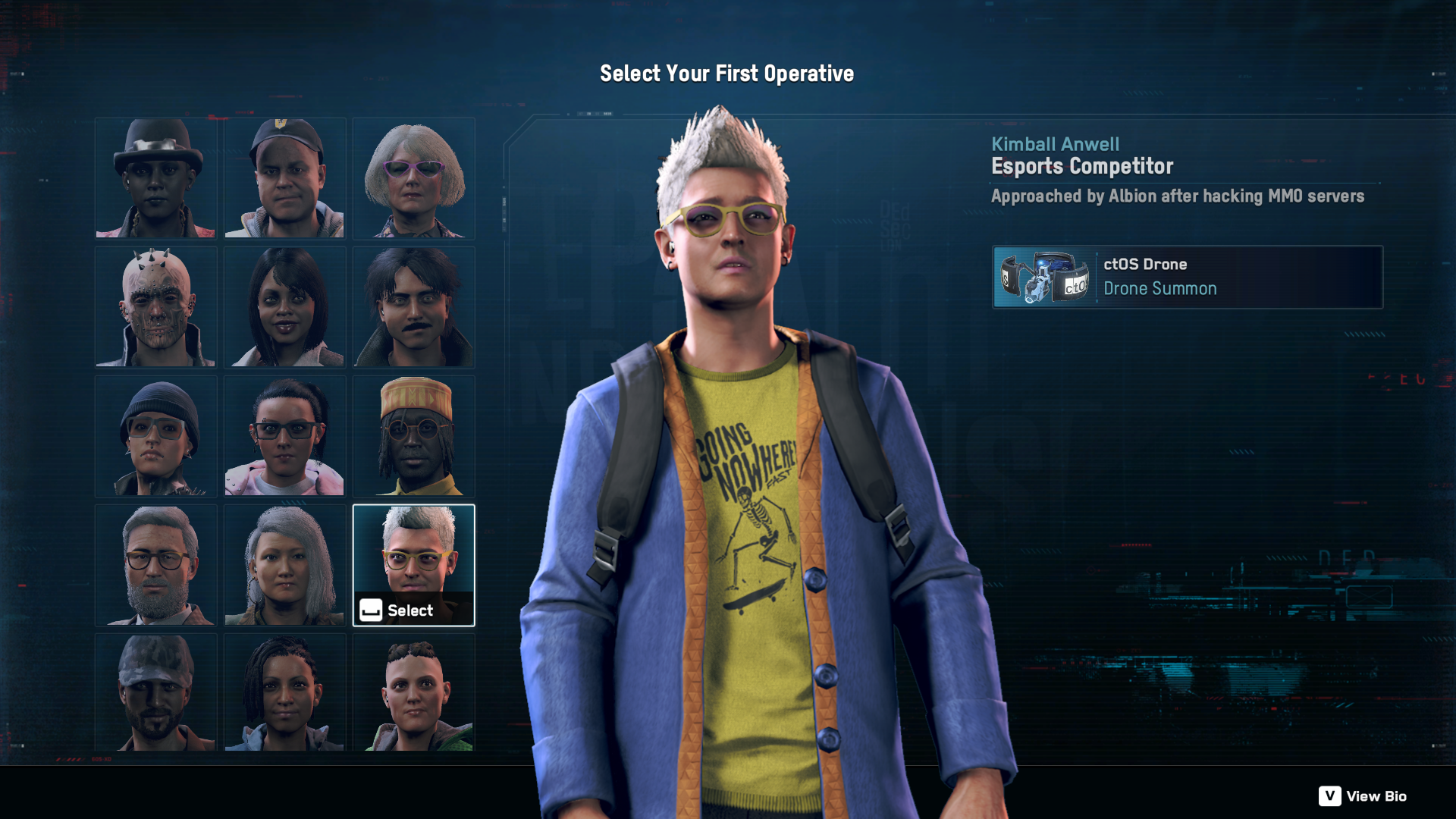 After the tutorial in Watch Dogs Legion, you’ll be shown a screen of potential recruits of which you’ll only get to pick one. This character will serve as your main avatar as you get DedSec up and running again so it can be a good idea to pick one right for the job. This screen also provides a good showcase of what kind of things to look out for when you’re recruiting in the future too.

Each citizen of London will have some assortment of Skills, Gadgets, Vehicles, and Weapons. Skills can be anything from discounts on clothing purchases (which may be necessary given the heinous and boring outfits some people choose to wear in public) to the far more substantial hacking speed and cooldown improvements. They can even take the form of extra faction damage or friends in high places who will allow for shorter arrest and hospital times should your operatives be in need of that kind of assistance.

Gadgets are the fun sci-fi toys you’ll be spending a lot of time with in Watch Dogs Legion as you wreak havoc across Albion’s London. These come in a variety of flying or spider drones, as well as mines and few other surprises too. These are often more helpful in theory than in practice though. While several collectibles might require a spiderbot to reach, you’ll normally find a spiderbot box somewhere nearby if you didn’t bring your own.

Vehicles are just that, bikes and cars to get around the city. Although they might not appear the most useful, it can save some time when you’re sprinting around the streets trying to find a car to ‘borrow’ for the next mission.

Weapons might be the most enticing, but they can actually make the game harder, especially at the very start. A crowbar or telescopic baton will be mostly harmless, but several characters come with access to more lethal firearms. Yanks might not know this, but the UK frowns upon citizens armed to the teeth, and likewise, our security forces aren’t always packing heat. We don’t shoot each other much in Old Blighty (we stab, bottle, and punch instead). So when you select an operative equipped with a gun, you might be tempted to use it. The problem is, if you start using guns, everyone else will too, and what started as a classic pub brawl could quickly escalate into a multiple fatality shootout.

Your first operative will be pretty basic, and only bring one benefit to the job, but as you progress you’ll find people out on the streets with a buffet of advantages to use. That means your first choice isn’t that important, but if you’re trying to get the most out of them, a skill is probably more useful than anything else, especially if it improves their hacking or stealth for the first couple of missions. And as you’re deciding which one to select at first, you won’t have to worry about permadeath. Even if you do have it turned on, it won’t take effect for the first few missions and by then, you’ll hopefully have a few spare resistance fighters should the worse happen.

Why Do You Want To Work Here? 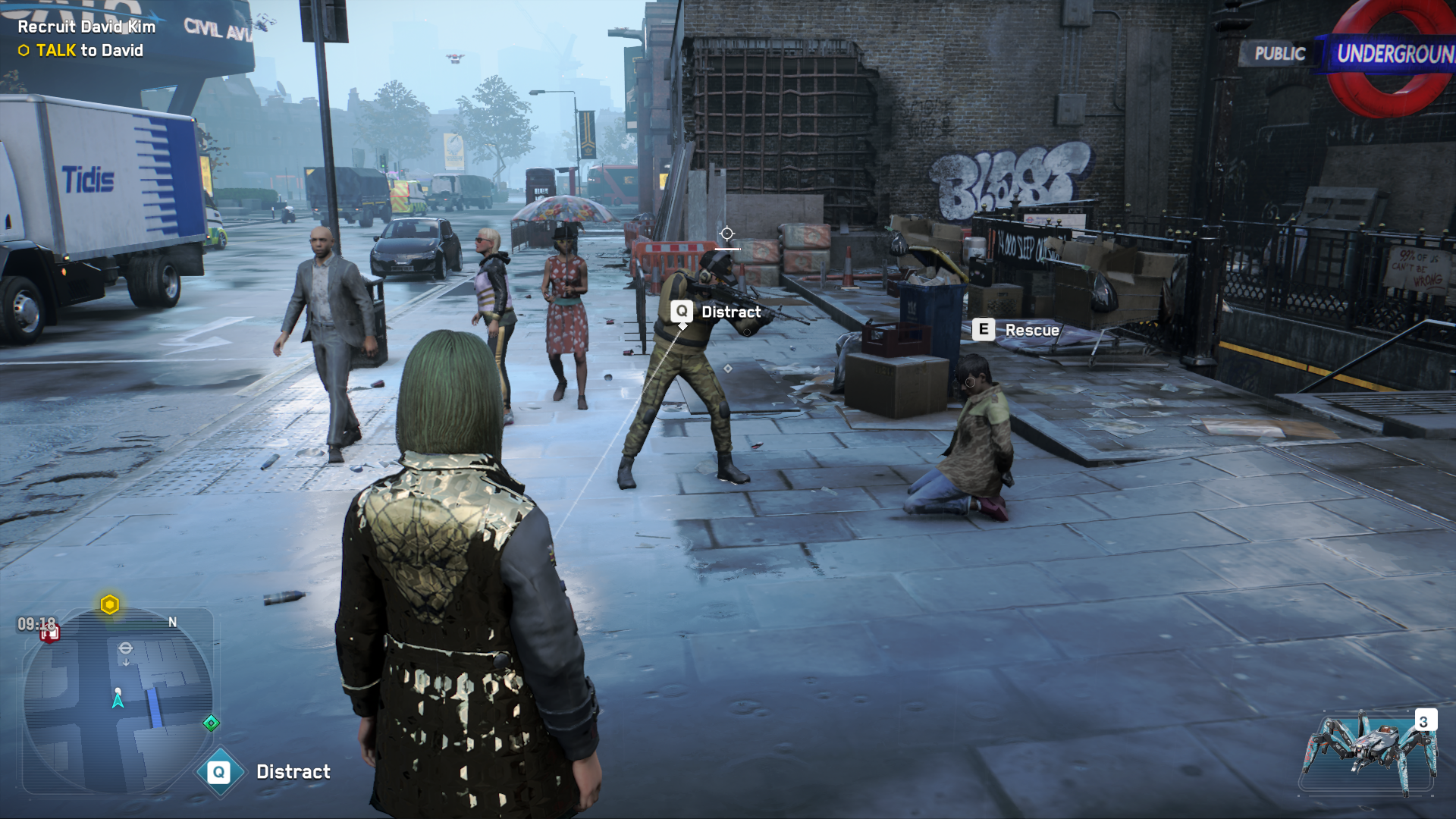 After you’ve completed the first couple of missions, Watch Dogs Legion will start nudging you into recruiting a few other operatives for DedSec and will show you the ropes for how it is done. Find someone you like the look over, whose skills fill in a different gap in the team, and politely ask them to join the gang.

Doing this will trigger a side quest though, where the potential recruit will ask you to rob from organised criminals, deal a bit of damage to Albion in their name, or something else in exchange for their service. These quests are always well laid out and fairly easy to complete, and after that, you’ll have one more DedSec member to play with.

But that isn’t the only way to recruit people either. Sometimes you’ll see good honest citizens getting harassed and tormented by Albion personnel hellbent on making London even more depressing for the people that live there. Help them out, and they might join you without sending you off to Camden Lock beforehand. But attacking Albion soldiers in the street will bring some unwanted attention your way, so it's best to plot an escape route before you jump into the fray.

What Are Your Strengths? 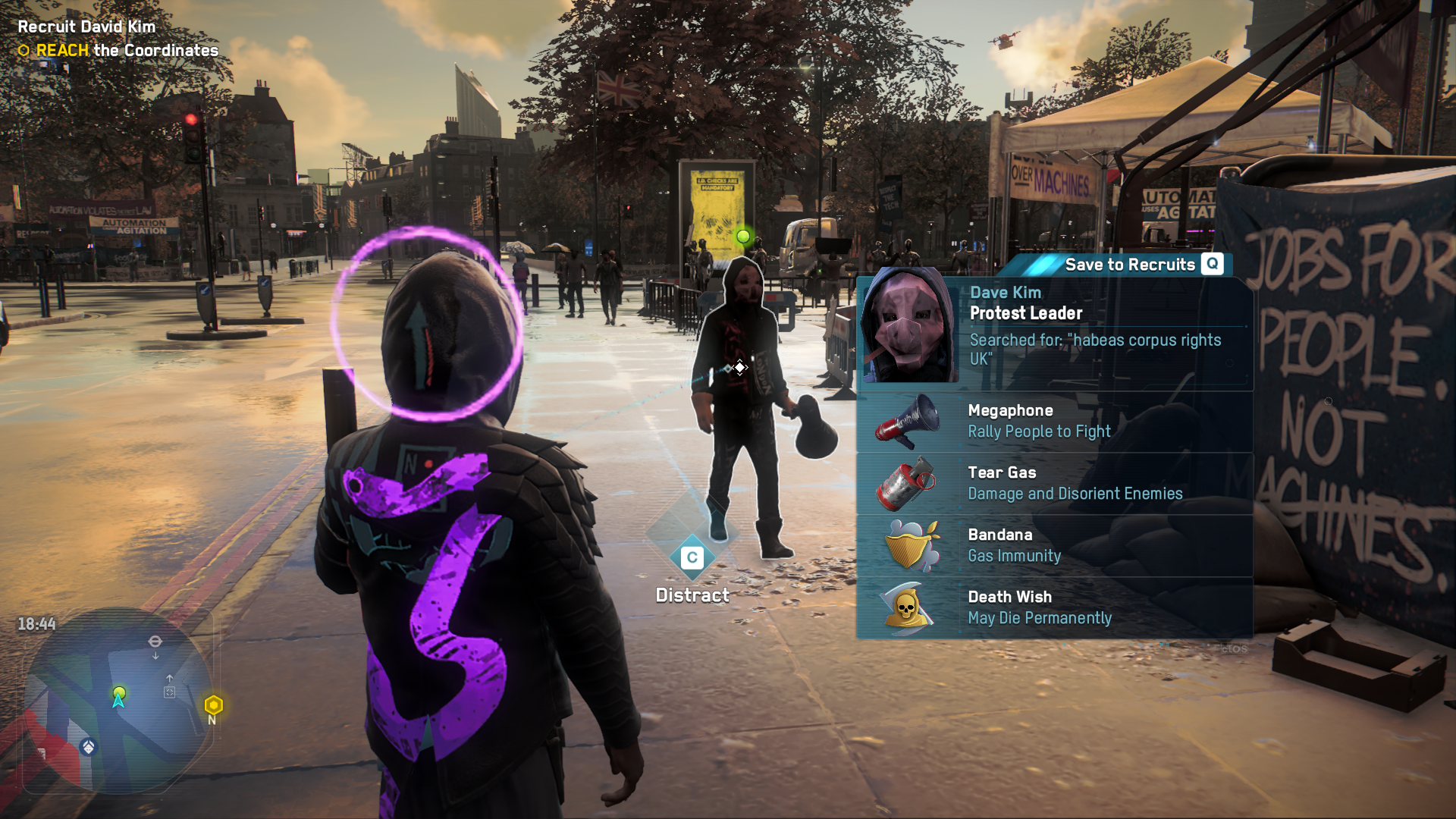 We’ve already discussed the various benefits that different people can bring into the organisation, but some people have more skills than others. Occasionally on your dystopian misadventures, you might spy someone walking down the street with a large green blob above their head. These rare individuals are the creme-de-la-creme of revolutionaries, and are worth immediately recruiting, or saving for later if you don’t have the time (this can be done with "Q" on mouse and keyboard) These green blobs can be anything reasonably considered cool, such as Protest Leaders, or Anarchists, or even Paramedics, and will have access to several benefits for your team, and several unique ones as well.

As the game demonstrates as you take the reigns, some people will have access to unique buffs and these green blobs will highlight some of the best ones of them, such as Spy Watch or a uniform that might get you into otherwise restricted areas.

Adding a couple of these people to your team will greatly increase your chances of success and the amount of chaos you can cause across the capital. 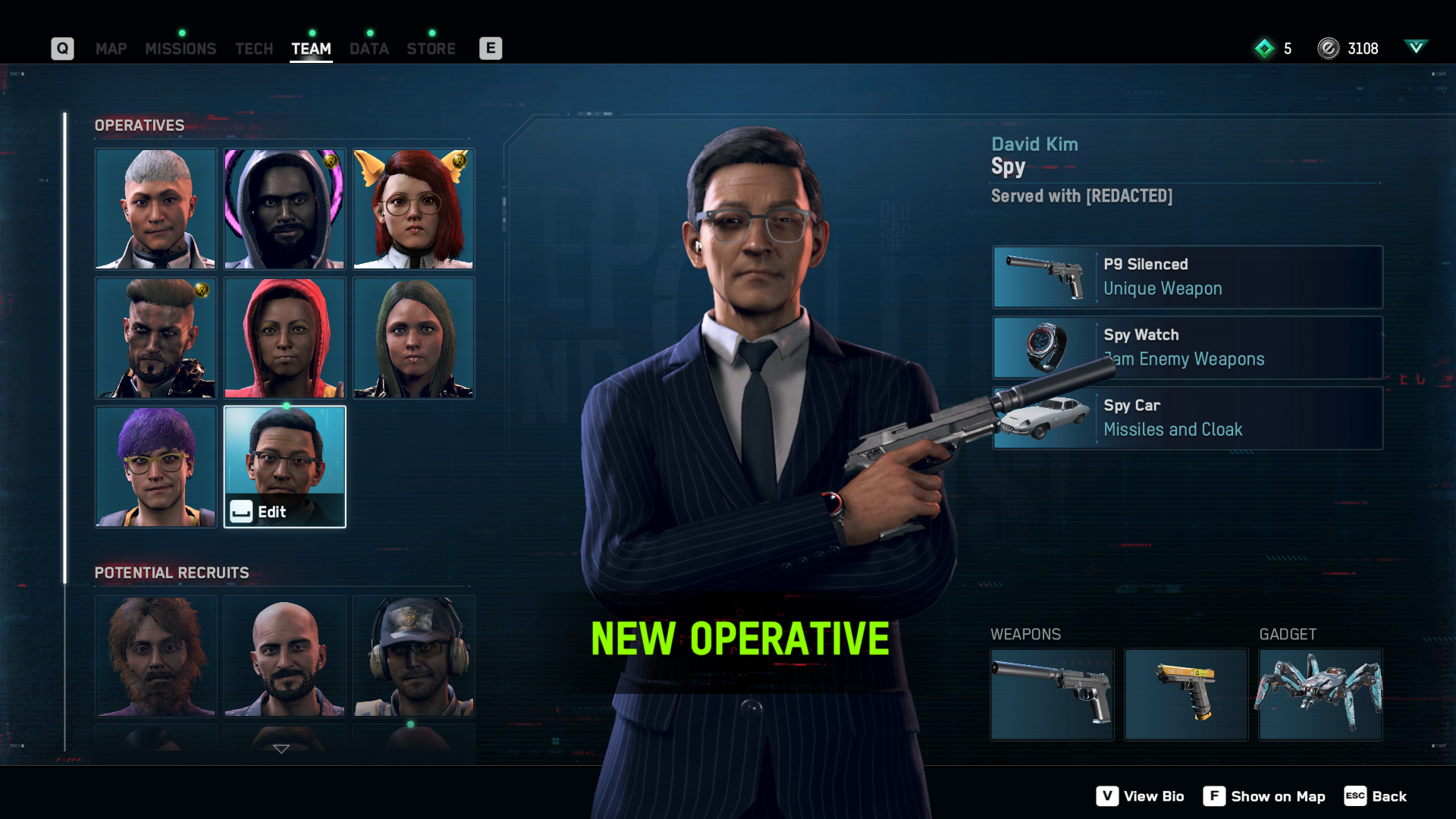 Diversity is one of the few things London still has to be proud of and should be the hallmark of your team in Watch Dogs Legion as well. And while gender, race, and style might have no factor on your team, where your operation will fall down is if you only recruit the same set of skills each time.

Every time you recruit someone, they should be serving a purpose in your collective, even if that is just to buy better clothes cheaper because your builder refuses to take her hardhat and high-vis off during a stealth mission. You might think that you only want gun-toting ex-army officers in your squad, but even if you prefer to fight your way out of trouble, a few sneaky grannies or hacked off board game designers might make all the difference as you explore the city.

Watch Dogs Legion is quite forgiving as a game. It’ll make sure you have nearby access to everything you might need to solve a puzzle or complete a mission, but it assumes you’re being as smart with your characters too. If your job is to sneak into the local Police Station, you’ll not want to bring your biggest gun, you’ll want to take your quietest person. Likewise, if you’re gearing up for a fight you probably don’t want to take your best hacker and their handy-dandy stun gun.

Make sure you’ve got a team of differing, overlapping skills so you can always find someone for the job. And if you find yourself without a particular set of skills, you can always go looking to recruit someone in that field to your team. You’ll never find someone that can do everything, but following these tips you'll get to create an incentivised, synergistic, next generation team that can deep dive into your issues and take your company into the digital future. Something something dividend, something something growth.