Watch Dogs had a rocky start to its life. The trailer blew us all away back in 2013, but the game – and particularly the protagonist – failed to set the world on fire. Aiden Pearce was a boring character surrounded by an interesting, albeit flawed, concept. The franchise since improved that from game to game, with Watch Dogs Legion ditching characters altogether, but it seems even that isn’t enough to escape the weight of Aiden Pearce as he continues to haunt the series. Bloodline, the first major DLC for Legion, follows Aiden Pearce on a prequel journey through London and is a lot of fun despite his different focus.

Watch Dogs Legion wasn’t for everyone, and part of that was due to the nebulous team system that let you recruit anyone. For some, this made it difficult to connect with the characters and the wider world. For others, this let them create their own stories in much the same way you might do in squad games like XCOM. You might end up picking characters for missions based on this invented history or past sessions rather than the skills they have, which adds optional layers to the experience. Bloodline does not like you do that. Instead, you play as Aiden Pearce as you explore London before the very British coup. You can’t recruit other people to your cause, so I hope you like playing as the standard tech bro. You can at least dress him up in all the usual fashions from the main game, though, which may make him look a bit more interesting.

The story has a bit less of an optimistic edge than Legion. You aren’t resisting an increasingly realistic future regime; you’re committing acts of corporate sabotage on a company while they threaten you and your family, etc., etc. To play off Aiden's defeatist nihilism with some fresher-faced revolutionaries would have been nice but since he's the star of the show, you don't get to really pick who you throw your hat in the ring with.
You’ll also meet many familiar faces from Legion, although it's only set a few months before the start of the game, so there aren't any radical origin stories to be told here. Wrench, the mask-wearing absurdist from Watch Dogs 2, also features heavily and offers some welcome relief from the walking midlife crisis too. 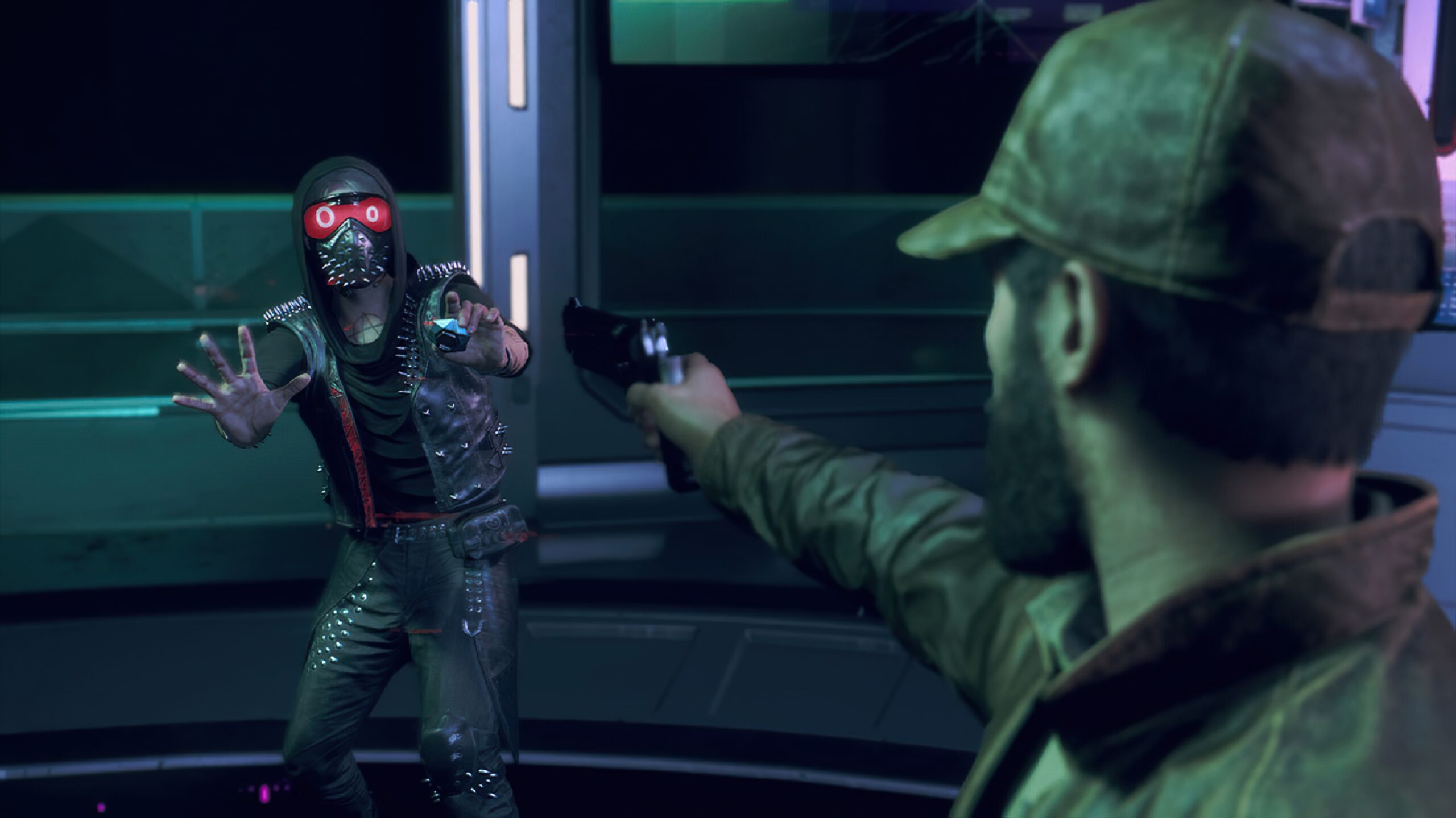 The gameplay works much the same. Players have to use a blend of stealth, gunplay, brawling, and driving to overcome several objectives that normally boil down to entering this restricted area and then touching something before leaving. There are dozens of ways to play and approach any objective, though, so you can have a lot of fun causing chaos or making your way unseen. You’ll have access to drones, phones, and automobiles to do your various deeds, and while some will be able to escape entirely unseen, a lot of missions tend to end in explosions and gunfire. Some missions actually require it, with linear chase sequences or waves of enemies to dispatch. There isn’t a great deal of new content in terms of gameplay, but it was already a solid, engaging experience in Legion, and it holds up well now.

Obviously, in Bloodline, you don’t have the threat of wounding or killing one of your squad members since you’re just playing as Aiden. Each time you die, you’ll simply restart and try again. Once again, this choice will delight some and upset others depending on how you enjoyed Legion's squad system.

Leveling up is also a little different, with the tech points you can find through London replaced by a series of side missions that offer additional gadgets and abilities to Aiden. Like the main ones, these missions are fairly simple, with loads of ways to approach them, but their inclusion reduces the need to explore the Big Smoke. And you can visit the entirety of London in Bloodline, with some subtle differences to show the slightly earlier timeframe. Despite the dour main character, Bloodline is set before Albion fully takes over, so there is a sense of normalcy that is well captured. Protests sites don’t have that destructive, besieged energy as they do in Legion for a start. You can get the sense that London is in twilight, quickly rushing towards the night, which is a really impressive feeling to come across when you might not notice some of the differences.

All in all, Bloodline is a great addition to Legion as it adds new missions and a new story to explore. While Aiden might not be the most interesting character, his presence doesn’t detract from the world Ubisoft is building, even if you lose that emergent storytelling from your team. When you’ve completed Bloodlines, you’ll also get the chance to recruit Aiden, and a few other related characters, into your team in Legion. They bring with them their impressive skill set as well as their boring attitude. Maybe don’t invite Aiden to the Dedsec Christmas Party.

Bloodline expands on Watch Dogs Legion's London, with new missions, returning characters, and a slightly different setting to explore. While it doesn't add much in the way of new features, it's the perfect reason to come back to the Old Smoke and give it the middle finger once again.